That was SO the Wrong Decision

Almost three weeks ago I rang my doctor's office to make an appointment. I wanted a prescription for hay fever meds, but I also wanted him to look at this bump on my head from, I think, when I walked into a pillar in my parents' house in Feb. Dr Tom is a popular doctor so I knew I'd have to wait three to five days to see him, and Ben's busy so the appointment would have to be on a morning when he doesn't have a meeting, and Tom was to be away for two weeks during his children's school holidays. So, this Thursday at 9.15, or would I like to see a locum? No, I'll be fine, thank you; two weeks isn't going go make much difference to early signs of hay fever. Right?

I tried to fool myself with regular eye drops and minor-irritation-skin-creams until the weekend when the spring gale blew and blew and blew and I was finally laid to rest and regret, regret, regret. Mind you, our gale wasn't as bad as elsewhere; down around Christchurch there are homes without power this morning and they're expecting even of the stuff.

Whenever it was last week when I was in town, I thought of going into a pharmacy to ask if the same stuff can be had without prescription, or get interim relief, but I didn't feel the need to rush. I also had one full bottle of the med, and an unused thing of allergy eye drops on my last day in Japan, but the former went into a box to be posted, and the latter into the rubbish.

So my brain may have been paralyzed long before the latest spring gale. My heart is so willing to work, but my body says no, and my head is... on a holiday somewhere. So, thank you for your kind words to the last post, I am most definitely not pushing myself to do anything. I'm forced to take my time. Though I would like some having-done's right about now so I can feel that mild , happy having-done-ness.

I have been cooking a little. It's been cool, and I feel like cooking when it's cool. I'm also trying to go back to the mind frame of last Nov/Dec when I resolved to cook better and for us to eat healthily, and if we can wing it, loose some girth along the way.

But not to worry too much. It's raining today, the air isn't filled with pollen, and it's lovely and cool. I don't have to cook dinner possibly for the rest of the week. And my mind is working a little better this morning. I might go make some warps.

I have been weaving some, too. This is the first of the Not-Laharya, about 140cm woven, though the picture looks a little too yellow and somehow alarming. It's nicer than this. 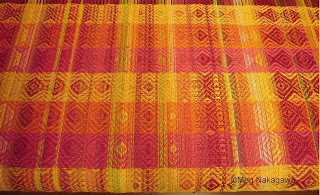