Well, that's not news to us, is it? India/Not-Laharya, the last three, and the current five-grays warps were cashmere or cashmere mixes and I've had technical problems left, right and center. I wonder if the big loom is too harsh on cashmere yarns, some of which are not twisted much so they stretch and then snap.

I like to weave my Japanese cashmeres at 15EPI for a good balance of softness and presence, but on the big loom I sett the warp at 18EPI so the shuttle doesn't fall though the gap; my preference is to weave with Schacht end feed but for the last red-purple-blue warp I used a small Swedish boat shuttle with my recycled paper bobbins, sett 15EPI. The finished texture was lovely.

Doni's cashmere/silk/merino is a little less delicate in the yarn, (but boy, does it fluff up nicely!) but at 24EPI the warp ends appeared to be rubbing against each other and I had a lot of broken ends, so in the second red warp I changed to 21EPI, and at first I kept looking the shuttle. The finished textures were different but both good, and if I can mange, I'd like to weave with both setts depending on the draft and the weft.

I have had so many broken ends on the left side facing the warp, so much so I started to wonder if there are rough/jagged/sharp bits somewhere on the left side. The left side of a warp is usually the last ends I wind on the mill, so perhaps as I create a rhythm and start to loosen up. Perhaps the center of the warp chain is not perpendicular to the loom as I wind, and magazines fall off the left side first, though I've always been extra vigilant in that department.

And then this one is hard to put into words. I almost took photos while weaving the pink piece but I was too embarrassed. Anyway, I get nice big sheds in the big loom and I always use floating selvedges. Depending on the sett, yarn, the number of ends in the slot next to the FS in the reed, and the draft, I get big loopy wefts ballooning on the sides. And because it happens sporadically, I can't figure out how to prevent them other than slowing right down and checking every single pick and pulling the sides in if necessary. A little bit of ballooning is not an issue if I'm using good merino in the weft, but cashmeres and merino/mohair mixes are ruthless. Strangely, I don't have this problem with my cottons but they are a different genre.And it was particularly bad on the pink piece in the last pic yesterday.

And I'm really really bad at hemming, so I'm going to stick with fringing until I resolve the other issues.

Soooooo, I haven't felt like a descent weaver in a few months now. I don't like putting hohum pieces in the gallery, and all but one had varying degrees of hohumness this time. I hate being a weaver like that.

Second time in the garden in 24 days; I've wasted a lot of gorgeous autumnal days, but then I'm happy I can think of 24 days as long in not gardening. I keep records of the time I spent and what I did, because that's the only way I can remember how I've done. It's still a long way to being able to see any results, and I'm talking about only one tiny section of the property. But today was lovely, I had hoped to weed just beyond the patio, but I never got there because the patio was a mess with dead leaves and weeds in pots, so for four hours I cleaned and weeded the pots and moved them from the summer position to the winter position, i.e. allowing maximum sun. I'll get to just beyond the patio tomorrow. Afterwards a kingfisher came to visit. He's not flighty like some other birds and hung out with me over fifteen minutes. What a treat! (Please excuse the dead bits I haven't pruned. In fact, I can't get over how OK my place looks in this picture, because it's been really chaotic for over a year now.) 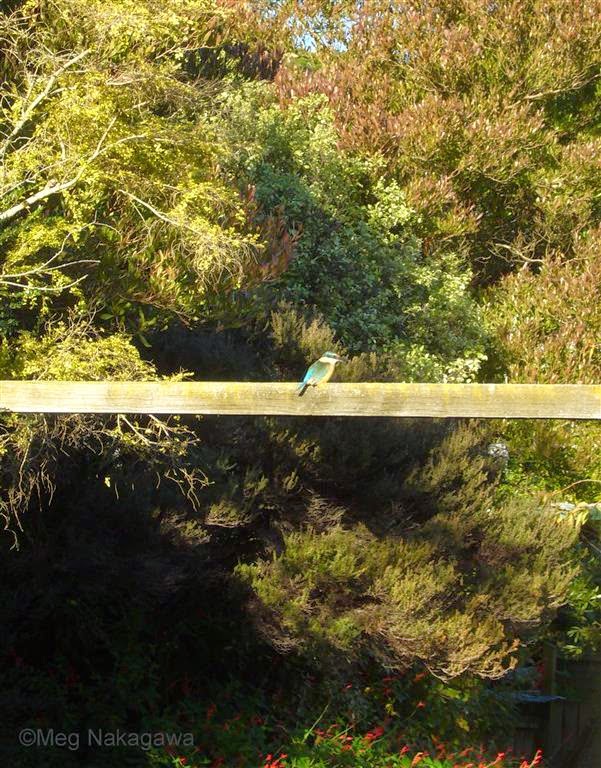