Ben gets up excruciatingly early during holidays, but I'm trying to keep up with him. Not getting up at the same time, heaven forbid, but scandalously early. He takes his time making espresso, we drink them leisurely, then we cook breakfast. And then we work just a little bit on the mammoth list of things need doing around the house.

This morning Ben cleaned the barbie and I restacked the firewood that fell two nights ago. Then we stacked twelve more garden bags full of firewood; Ben has to carry them up a flight of stairs, turn 90 degrees to the left, go up a few more steps, walk across a concrete patio, then walk up a few more steps and dump them. I stack them. Sounds a little unfair but both take about the same amount of time. (I damaged my hand working alone some years ago; the logs are too fat for me to grab with one hand and I extended the mussels at the bottoms of my thumbs too far; no weaving for months!) Described this way, our place sounds huge, but it's not. We just don't like this job. We'll finish this load on Christmas day if all goes to plan.

We need between two and three loads per winter. As we progress, the later loads are stacked closer to the steps so Ben's part will be easier but I have to stand in the scorching sun so it's not that unfair. We think it's time to give a thought to our heating strategy. We can have one load and light the fire for entertainment, but don't want to rely mainly on the wood burner in the future. (Although... our burner heats up the hot water and I cook soup on it in the winter. Great, eh.) 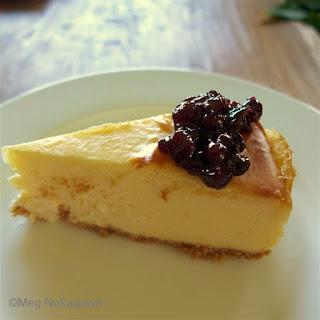 Then we made Ben's too-much-organic-home-grown-lime-juice cheesecake. Today we put a spoonful of blueberry jam a friend in Maine, USA sent us.

After lunch, I had planed to attempt photographing again. But yesterday I worked half a day in vein trying to base the next project on the draft I made for the pink and purple pieces, so I wanted to have another look. Three hours and much talking to myself out loud later, I altered the threading and came up with a couple of drafts I might sample.

Here's one of the drafts I used in the cotton pieces. 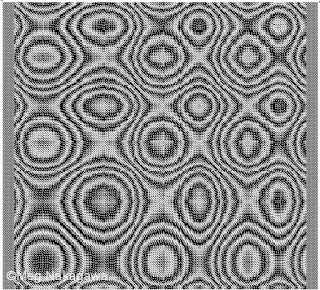 And this is one of the candidates.

My starting point, as usual, was to make something completely new that doesn't look like anything I have ever woven. And I wanted to make really big designs using very skinny yarns. But I saw immediately that this draft fits the commission brief so wonderfully and I knew I had to weave it to at least show the client. Besides, this will be woven in navy merino with probably wool or silk in "sympathetic" colors, so it will have a different mood to the cotton pieces.

I felt humbled to have this opportunity to work on this commission, and to have a pretty good chance of making something the giftee can treasure, if I may say so myself. And I felt grown up about recognizing the merits of this draft, instead of pursuing my own satisfaction. So, a good day.
Posted by Meg at 12/20/2015 07:47:00 PM