Today's post is based on my somewhat-daily email to Dot. These are why I don't need Morning Pages; they're usually where my daily planning starts, although more often than not I list sensible thing and then go and do the not-so-sensible. Or worse.

The wind has reached a new high/low. Instead of gales coming and going, it’s non-stop today, and we could hear the chimney vibrating from the bedroom at the other end of the house. I may have said this recently, but of all the factors of climate change, chez moi, the frequency and strength of wind, and subsequent loss of moisture, has been the strongest-felt. I am utterly distracted.

I’m in full-on weaving mode, which makes me very happy, completely ignoring outside, which is looking pretty terrible, or as per usual, depending on how you look at it.

It's been wonderful since I last tidied the stash room. I know exactly where everything is, except the few things I put in special places because I knew I would need them in the really near future. I've had to looking for them just before bedtime in a mild panic because I had planned on falling asleep with these images imprinted on my brain. Like last night. 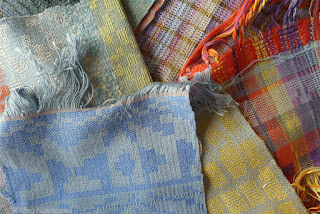 I’ve started revisiting Summer and Winter and it’s (sic) relative(s) for the more graphic look and am reconsidering sett and fiber to make the hand better... I love twill because I like the 3D look and feel of fulled fibers, and mixing plain weave, mostly-warp, and mostly-weft areas. And I think twill's drape suits scarves and shawls. But I also feel lazy sticking to the one structure, and because I've been pondering a more graphic look, I checked different structures in half a dozen books and came back to my previous reconnaissance of tied weaves.

Interestingly I've sampled/woven S&W et al. only on small hand/table looms so I could thread and lift on a whim, and that was part of the discover/fun. The nature of the projects feel different when I contemplate bigger projects on the dobby, but I'm looking forward to the investigation. (Yeah, after planning and sampling, the actual weaving with multiple shuttles will be a, how can I put it politely, drag.) 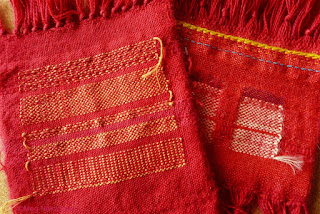 Remember also the Friendship piece I abandoned, for the time being, before the 2012 exhibition? I've been thinking about that a lot, sorting your contributions by color, then by thickness, then tossing them all on large drawing paper, black, gray and white, to see how they fall. My initial intention/experimentation was double weave, incorporating your contributions on one side in plain weave, pick-up, and inlay showing off your yarns, while using 14 shafts on the other side for my kind of a fussy twill. I've been wondering if that was the best idea because I haven't bettered it. And again, if I'm doing fussy twill on the back, it'll have to go on the dobby to make life easier. (I have only one warp beam on the big loom so that's another potential problem, but comparatively easily solved with sticks, strings and milk jugs, I think.)

I’m also designing... a commission piece based on the giftee’s (art) work... That will most probably be in twill.  I haven't done this kind of in-depth designing in a long while so it has been special, exhilarating, and exciting, but for the time being this needs to remain a secret project.

One of the things that dropped place on my To Do list is the online shop. Again. For as long as I envisioned having one, I imagined a small, boutique-style, snobby, expensive, girly shop with specially "designed" packaging and other frills. (That was my initial intention with this blog, too. Goodness.) But what I have on hand is a disparate collection of experimental and a few nice but older pieces. In addition I've been wondering if I want to pretty up some of my swatches to sell. And then there is the pricing; I'm unwilling to undercut the galleries and folks who have bought similar pieces previously, but others I'm more than happy to let go for much less. And this mixed/messy feel is more in line with my personality and life. I haven't been able to "see" how to proceed. Maybe I can think about it in Japan and work on it after I come home.

I want to book my ticket to Japan, too, but I still can’t decide how long I’ll stay. I think it’ll be on the longer side as mom is having considerable trouble with her lower back... But if I stay long, we might get into fights. Rock/hard place. Meanwhile, I got locked out of Air New Zealand website (account) because I forgot my password and tried too many different ones. But before I go, I want to finish and sign off the tax returns, and weave five commission pieces, one of which has been waiting 2.5 short repeats to be woven for... ever. Four on two warps, so doable, but tight.

I do love just thinking about weaving. The woes of the world leave me for that duration.

P.S. NZ$ has bee behaving badly for over six months now. Meaning, my Japan trip is going to be a Lady Dog; it's put a serious cramp into my book purchases, but also, if/when I get my darned shop done, it'll be advantageous to everybody outside NZ.
Posted by Meg at 12/05/2015 02:19:00 PM