You Wouldn't Believe What Mom Told Me! 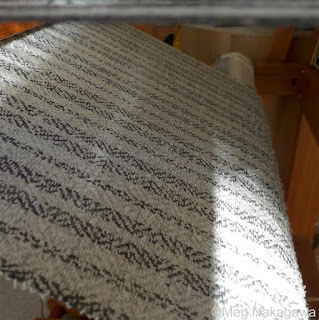 Although I was glued to the telly most of yesterday, I rethreaded and started the first piece, and finished it today. The weft is a very white undyed merino bouclé, which isn't a good yarn to show off the warp's lovely wet hand, but lately I seem to be looking for layers or juxtapositions; here I have at one level different-width stripes in two values, at another the twill "squares", and on top the loops. 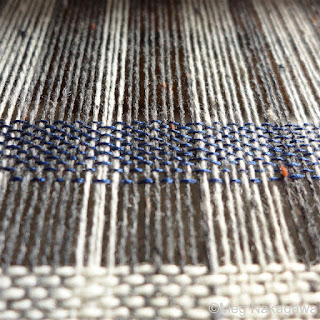 I had planned to use a black and dark gray possum-merino-silk in the second piece, (it makes a slightly lighter/thinner cloth than using yarns same as the weft in the weft,) then I put in a few shots of plain weave with a leftover yarn, a very icky synthetic in gazillion strands but shiny lovely navy. I love, love, love the clear appearance. Sadly I could only think of very skinny merino, cotton, or silks in this sort of navy, so as planned, I started the second piece. 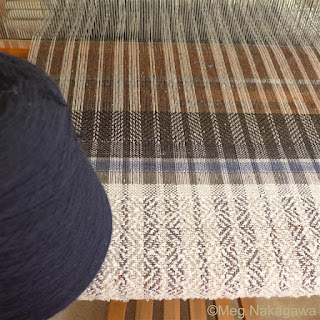 Except the charcoal PMS looked and felt so much skinnier than the black, so I got out a bunch of cones to make sure both were the yarns/cones I intended. (They were.) That's when I found this big blue cone! It's lighter in value, less shiny than the icky synthetic, and a tad coarser, (NZ halfbred?) but it could work. Will the scales make up for the weft's coarseness, or will I ruin the warp?

Mom told me last night the warp yarn was mill end, and I can easily imagine lovely wool fabrics made of these. She also told me the big bag of her hand-dyed handspuns is also NZ halfbred. (The darker blue can be seen on the bench at far right, and there is also undyed, extremely pale blue, pale mid-orange, and a couple of balls of these in a mix.)

What floored me last night was that when she first started to "weave", for her first spinning project, (because although she knitted all her life, dyeing and spinning was part of weaving to her,) she bought fleece of ten sheep. TEN! When they were delivered, there was so much of it she thinks she stored them in the garden shed, then cleaned and washed all within days so the volume roughly halved and she could bring them inside the house. And it was all used up!

And she kept buying more and more but she was also productive and I don't remember there being much fleece or sliver in the old house. In fact, in her 60's and 70's, she was really prolific; I am only aware of her weaving because that is what I understand and study and discuss with her, but come to think of it, other than the set of mill end wool I'm using now, the big wool lots from her stash are all handspun.

No wonder Dad had to raise the roof by a meter so she can have humongous stash area. Perhaps I should have photographed that attic; the house was demolished some time ago to make room for multiple houses, so too late now. I have another huge lot of dark reds she made with which I'm so looking forward to making a series of wide shawls, but that's for much later.

(Also, she got rid of her Majacraft wheel. I had repeatedly asked for it, when was ready to let it go, for the last 20 years. Last week she said she sold it, though she never sells equipment; last night she said she gave it away but couldn't remember to whom. I'm pretty sure chucked it away when she moved house. Bad Mom!)

She's having lower back problems so it's been hard to thread and weave. I might go earlier rather than later so I can prepare the looms for her to make new things for her exhibition.
Posted by Meg at 12/04/2015 08:49:00 PM