This week's post was going to be about something totally different. I had a rather long draft post consisting of oh-so-many bullet points with oh-too-many usual suspects, at the end of which I was going to whinge about money. The main subject still interests me so I may revisit later.

I was going to whinge about Air New Zealand having yet another sale and because I was indecisive about when to go home I missed out on their last sale, and how even though I knew there would be another sale I felt compelled to book tickets when did, so I "lost" big money. It's self-inflicted. But it was big money, not a couple of bucks, not a couple hundred bucks, but three of couple hundred bucks.

I could have done so much in that expensive country for that amount. I know it's just money, but I've tried so hard to economize this side of 2014 Australia trip, and even though I didn't go into town often because I honestly wanted to weed and weave, it's also true I don't waste money on greeting cards and nice soaps and coffee and cake. Then NZ$ just dropped and I was feeling really sorry for myself. This is going to be an expensive trip. 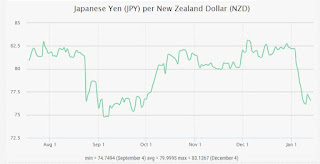 As promised I finished my Pop Up Shop on New Year's Eve. I felt underwhelmed by the look/feel of the shop primarily because the 11 items were eclectic, and there is no visual cohesion, no prettiness. It wasn't the girly chintzy shop I had in mind. and yes, I did.

Ben announced it on his Facebook page, oh, a week ago, and told me I must do the same and still I dithered. But impotently watching the NZ$ drop further, I thought the timing was right for non-NZ friends and I posted late last night. And today I sold six.

I feel excruciatingly humbled, overwhelmed, surprised, appreciative, elated, but also ill-prepared because even though I knew in my head there is a lot more work in online selling after posting on the Internet, to be honest I thought I'd be lucky if I sold one, two tops, during this pop up period and didn't rehearse all the way through. I got almost a little teary, even, with the warm words I received.

Then I pressed the pieces, lint-rolled them, check the labels and tags, gave a vinegar bath to a couple, and tomorrow pack three up to post, and three to take with me to Japan.

I am sincerely humbled, and appreciative, and hope they like my work. And a little tired. There is so much to improve even with a wee online pop up shop. But before I close, really, sincerely, thank you.
Posted by Meg at 1/14/2016 11:06:00 PM