Towards the end of Ben's holiday, I was getting so tired I warned him I'd like to sleep in and read one day. My sleep was becoming erratic again and I wasn't eating right because of the heat but also not drinking enough water. I never took that day off, though, because I had the Aha Aha warp which was so fun to weave, and finished three pieces and a fabric swatch by Friday. 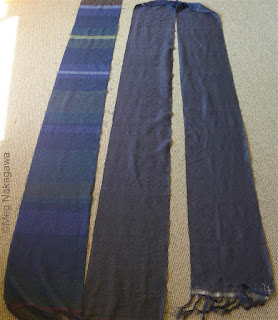 Even though everything had been set up, weaving three pieces in the first eight days of the year was a really good omen for this slow weaver. Then for the next three days I tidied the house to get it back into the "Ben's back to school" mode. Came Tuesday I was exhausted so I blobbed but couldn't figure out why I was so tired. Yes, it's been hot; no, I haven't exercised in the heat; and got only two spots in the garden before my skin started to itch in the glaring sun in spite of long sleeves, but three weeks of relaxing downtime with hubby cannot justify this degree of tired.

Then I thought of one possibility: Post Project Anticlimax.

You see, this Aha Aha commission project, (I love the name, it was going to have a totally different tone, but I can't change it now,) was a big deal for me; I was going to make something spectacular. And I've come to understand that when I use words like "spectacular", I mean well-thought-out, difficult, time-consuming, and probably most importantly, unlike anything I made before.

The two pieces on the right are my two candidates; Aha Aha is in the middle; the first, far right, though more understated, is lovely and rather mature-elegant. The far left piece for Mom, I used a number of dark-blue-ish cashmeres in Fibonacci because I didn't have enough of one color to do the job; it has the colors of men's kimono but the jury is still out on the piece.

These Aha Aha pieces, though nice, and would suit the intended giftee from what I researched, look typically "me". Meaning, they are nice in a stable, done-reasonably-well-many-times-before way, but not new to me. I didn't feel the thrill of something hitherto unseen come off of my loom, and I lament not taking this opportunity to broaden my horizons and doing something outrageous.

I did a lot of research, read a lot of words, gazed at photos, and walked around my house imagining walking in this person's spaces of my imagining. I made a whole bunch of drafts none of which suited and saved none. One insomnia night I was playing around with past drafts, (looking for something suitable for Mom,) and suddenly one of those jumped out showing me a visual to go with some of the words I read. I always planned to weave Mom's request on the lovely mill-end 72/2 merino, the same as my grays but in a delicious navy, warp, but knew also the warp would suit the project. All that remained was to sample some silks for weft, tweak the draft a bit, and voila, all systems go.

It was too easy, and not new, which is why I can't shake this idea of missed opportunities. I wrote about something similar last year. I also wrote about trusting my instincts and having confidence in my accumulated knowledge. By golly, I'm a hard one to please. I haven't learned how to reconcile the forward thrust vs riding on tailwind.

Yesterday was hot and muggy and I finally had that total blob out day with a massive headache, and had to miss a pleasant afternoon with friends. Today I'm better, but I'm thinking of weaving another Aha Aha warp, because I still have time after I come home.
Posted by Meg at 1/17/2016 01:40:00 PM