Back in the Saddle

I got home on Friday, but slept through most of that day. Then worked through a few loads of laundry, hand-washed a bunch of wool garments, put things away, fringed and wet-finished a piece I wove on Mom's loom, wound a warp on the four-shaft, and even managed a tiny bit of house cleaning, with amazing and totally uncharacteristic gusto.

I wonder if it had to do with Mom's new hay fever medication; it was so strong we think it stayed in her system for a couple of days; she took it once and put it away. I took one in the hopes of being able to get some sleep on the plane and got an amazing three-or-so hours' sleep, while one sleeping pill usually lets me sleep for a maximum of an hour. The medication was similar to what I was prescribed in the mid-90's, the kind that if I'm hit by a truck, I wouldn't notice for a couple of days. Anyway, by Saturday 10AM, 36 hours after I took the pill, I felt completely rested and ready for work. Had I known how this would work, I would have taken a couple more for similarly somewhat-dire situations! I hear it's going to be a bad, bad hay fever season over there, and we have plenty of sufferers in the family, so I'm sure the remaining pills will be put to well-considered use. LOL.

Though I didn't take many pictures during my month in Japan, I have a few good stories to share, so I'll work on them in the next few days. 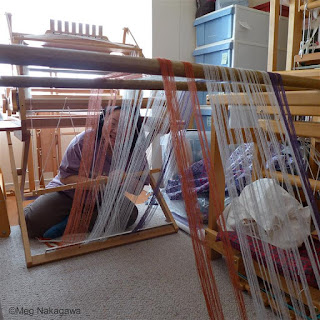 On one of the first days, I transferred a warp she put on a narrow loom to a wider one as the warp was wider than the first loom allowed. I was doing the best I could in a small space and Mom couldn't stop laughing because I looked like a trapped wild animal. I couldn't easily come out for a laughing break so I kept working, though I had to stop and laugh several ties. I hope I threaded it correctly; we couldn't find the draft afterwards! 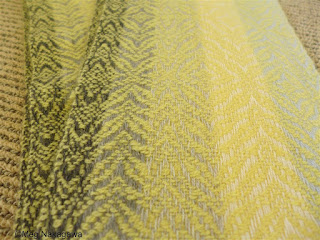 This is the piece I finished weaving about four hours before I left Mom's house.

Don't ask me numbers because I can't remember, but this warp is long enough for two pieces, and though I have the lifting going in one direction only on the printed draft, I wove top-down and bottom-up so Mom could see she has options.

Two table looms warped and threaded with multi-color cashmere for Mom to weave on right away; another waiting; I also learned how to warp frame looms with linen, so I dressed four; I'm pleased.

We cleaned her stash/loom rooms as completely as we could while some overflowed into the living room. Her stash room, the size of a small bedroom, acted as my bedroom during my stay, because her true spare bedroom is her loom room; we got our priorities right, Mom and I. 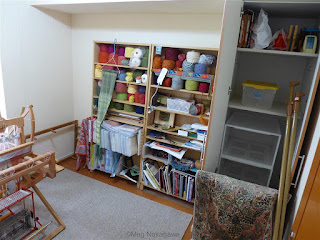 Halfway through Day 1, I realized we didn't get a 'before' shot. 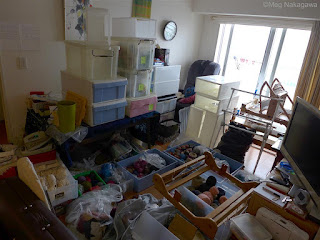 At the height of Day 2. In the end I left only three of those pink and blue containers in the living room. My sister is at Mom's today bringing out the sofa bed into the living room and putting whatever else Mom wants back in the stash room in... the stash room. And reorganizing her kitchen, but that's another story. 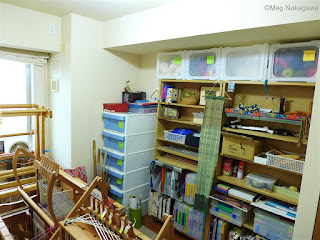 We could 't believe we did this in two days, and not whole two days but more like a day and a little bit. Now everything is where it should be, yarns in their properly-labeled homes, equipment easy to find. The four-shaft counter-balance is taking a break; it has problems with screws being loose and the loom wobbly all around; unfortunately I didn't have time to have a serious look into it. The wider and narrower eight-shafts are "staggered" (?) so two can weave at once; one sitting with her back to us, the other in front of the shelves. A four-shaft table loom, a Japanese plain weave loom called a Flamingo, and two rigid heddles go into the stash room until called for duty, which will make the loom room roomier and better-functioning. 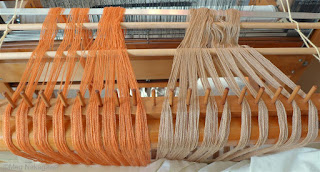 Back in Nelson, I put Doni's cashmere-mix in orange and peach, (a reddish beige) on the four-shaft. I'd love to weave more complicated patterns on the 16, but I know that'll be brutal for the warp, and I'll be mending broken warps more than I'll be weaving, so four shaft it is. I've been buoyed by the experiment I did with one of Davison's drafts, so I'll continue looking into making four-shafts look interesting.

But I'm even more interested in putting together really interesting color combinations, so some warp candidates have been lined up. Lavender would have been my first choice to go with the orange, but alas I haven't got much at all, so it's not among the candidates.
Posted by Meg at 3/13/2016 07:59:00 PM