After the recon, I knew where to put the three focus pieces: Mom's was going to be at the "start" of the exhibition, on the "front" wall; Mrs T's knotted piece was going to be near the center when looking in to the gallery through the large glass windows, with allowance for the window frame in the middle; Mrs E's bag was going to hang in the center of the view as visitors walked into the store and turned left to the gallery space.

I put together works that looked good around each focus piece, other pieces for filling spaces, and a bag of Mom's small samples and notes. Mom and I decided we'd rather fill the small gallery "as much as possible", just short of "too much". Artists Statements would be spread around the gallery to prevent "crowd" build up. I walked through the gallery in my head over and over for a few days refining the plan, but the day before I wondered if I should have gone back to the gallery once more. Truth to tell, I didn't have the time, but still, I should have made the effort.
The whole lot was loaded on Mrs T's car the afternoon before the exhibition; we met with Mrs T and Mrs E and the lot at the gallery in the morning. We also discovered to my great relief we could use push pins on walls. 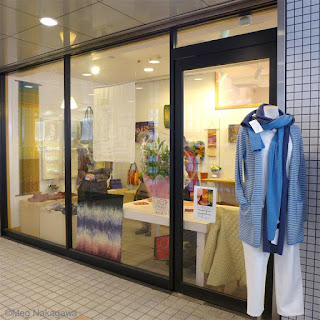 Mom's transparent screen was returned to her, so we were able to put something interesting against the window. Her hand-dyed decorative panel was too dominant inside the gallery, so that, too, was placed to entice shoppers to come into the exhibition. 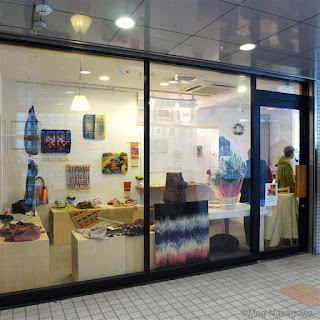 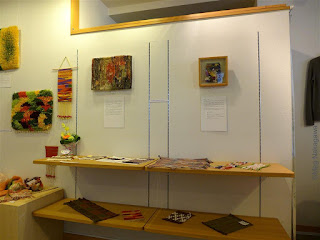 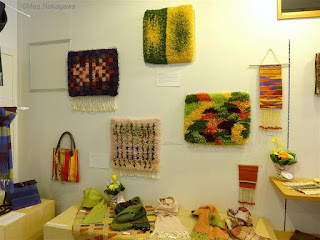 Folks kept not just touching but handling the pieces, some even trying them on, in spite of six discrete signs, later replaced by 10 not-so discrete ones. We exhibitors were were constantly returning and rearranging them. 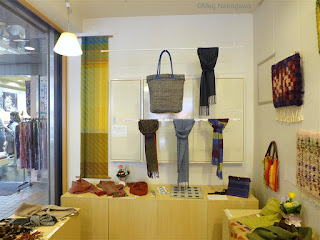 See the small purse and the matching scarf at bottom right? Hard to believe they weren't designed to go together; the purse is by Mrs E, the scarf by Mrs T, woven years apart. 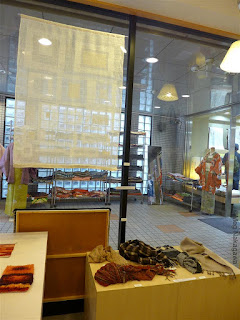 Next door there was a recycled kimono shop. 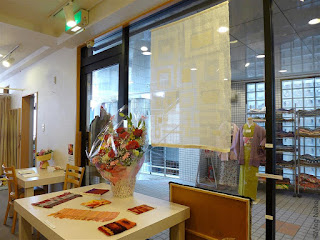 My sister came in the afternoon to keep Mom company and help me fine-tune the look. We finished much earlier than expected; Mrs T and Mrs E were able to go home a few hours earlier than estimated. 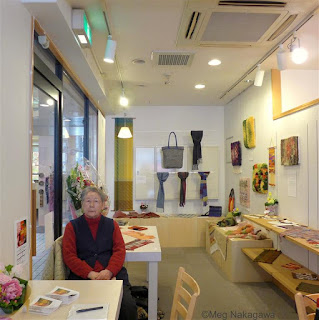 This was Mom on Day One looking a little drowsy from the aforementioned hay fever medication!

EDIT: We had several A4 posters outside around the stairs, which looked very nice, but I forgot to shoot them. Darn.