Hello there. Has it been a fortnight already? A week ago, I was going to tell you I can't remember what I'd been doing and had to check my record: "Blah day," "Not good," "BLAH BLAH BLAH DAY." (By the way the first pages of the diary/calendar became unstuck and it did acknowledge van Gogh's "Branch on an Almond Tree in Blossom". When I went to the same shop a week later, there were many more covers but this one appeared sold out.)

But things haven't been so bad; I've only a quarter of the way to thread of the white blanket warp; hay fever hasn't been too bad although I do stay inside, (so, nor garden time,) and it's been raining some days so there are the odd flowers opening. Ben's been sick, and we think it still has something to do with his myriad of dental problems, but he told me on Friday he had taken this week off to "help me with in the garden" so there will be dental appointments. Or so I thought, until we found out the guy's taking another week off. Curse Ben's "extraordinary tolerance for pain"; I swear it's the same problem for which we ran into a dentist office at 8AM (?) in Elgin, Scotland, in 2003, after having had it checked by our then-regular dentist in preparation for the trip. 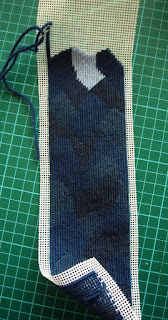 After a break, I resumed needlepoint; I lost the plot on the oblong/oval shapes and started to run out of the darker blues from the first project, so am mixing the lighter blues from the second. The focus is more on practicing the one-horizontal-two-vertical stitch, which has become slightly easier but I still get confused when bordering a different color and the yarn splits easily. Or should I say, I stick the needle not always besides the previous stitch but nick the sides. I prefer the irregular, less angular shapes. 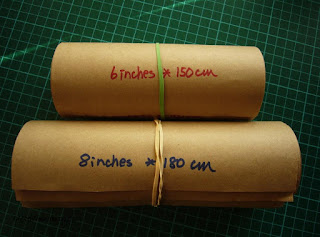 I've cut life-size cartoon sheets for smaller scarves in preparation for the Searles technique. I'm going to start with super simple lines/shapes in two-faced twill, but I needed to see real size pictures. I also realized I can't do this on my four-shaft which has only six treadles, since four shafts in two faces needs eight, (for options to lift shafts 1, 2, 3, 4, 123, 234, 134, and 124,) so I have to vacate one of my table looms, both of which have "can't be bothered finishing" warps. 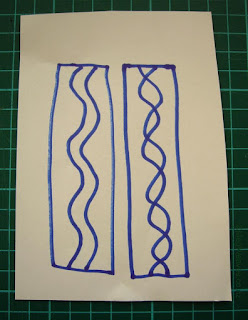 Something like these are likely to be my practice designs.

EDIT: Of course, with six treadles I could mix some kind of a twill with plain or basket weave, but in this case I probably would like to pay more attention to colors to make the two areas appear more in contrast to each other.  I'm a little afraid of using plain weave in case the texture/fulling come out unevenly, or selvedges scalloping. An easier solution would be a 3-end twill.
Posted by Meg at 9/19/2016 05:35:00 PM