It's been at the pace of an old-snail-with-joint-problems but I have some progress. (Rain today; all the pictures posted today have a pink tinge that doesn't exist in real life, but you get the gist.)

I don't have the final drafts for the baby blankets, but I've settled on a simple threading and got to work. There are roughly 12 repeats, (with irregularities at the selvedges,) and the first repeat took 90 minutes, then a half a repeat about half an hour, so I'm hoping the rest will take ten hours or so, or three sittings. It's a lovely yarn with the merino portion that smells like sheep when it rains.

The drafts will be in my usual kind of twills. 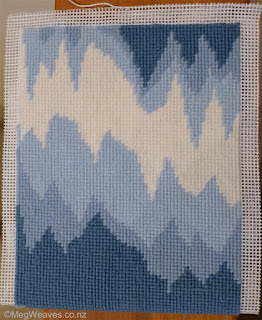 I finished the second side of the bag; I think it will be a bag. The white and pale blue stripes in the middle were far too wide and unappealing but the thumbnail of this picture didn't look so bad. 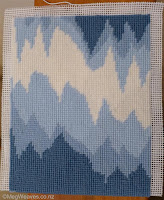 That's the surprise of projects without plans. I find the lines/shapes in the first side more unified and pleasing close up, but this may change from time to time. 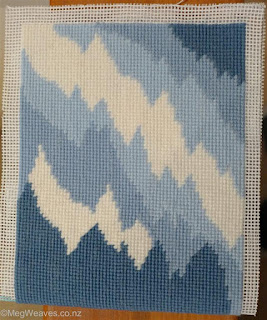 This is the first side. 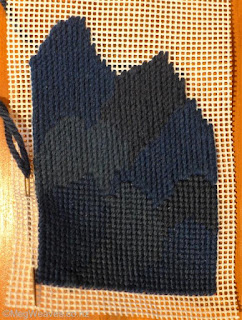 I started a practice piece with leftovers. (I have in mind a larger piece in ivories, camels and taupes; the yarns I picked aren't strictly monochrome as some have hints of yellow, but harmonious overall.) I started out practicing oval/feather/pear shapes in different stitches but it's not working all that well. I've only ever used the one-horizontal-one-vertical stitch, but one-horizontal-two-vertical stitch, (and presumably the two-horizontal-one-vertical,) is thick, soft and lovely; it's easy to split the yarn and stitch through it, however, or to miss spots adjacent to adjacent patches. Mixing the different stitches would give depth, but I'm not sure if I have the patience counting and picking, and I find myself leaning towards one texture/flat outcome and placing interest in the colors and shapes, like my weaving. One option when working on a larger piece is to draw the approximate shapes/plan on a piece of paper and check my progress against it as I work. I love the saturated navy blues and the comparatively monochromatic look of the sample.

I got through the twill and Summer and Winter parts of Searles book immediately, (I'll have to learn the other structures before continuing reading,) and have been dying to experiment. I've had a longish for-samples warp on my 16-shaft Klick for ages so it's a cinch threading, but for now I'm holding off until I finish threading the baby blankets lest I get too absorbed by the experiment. This is going to be so much fun, I tell you.

I weeded and planted some wallflowers; it's a tiny patch and still I did it over two days, (spring wind started blowing on cue on Sept 1,) but I did it nevertheless. I'm not sure if the new medications/supplements are working, if I'm being super lazy, or now it's the hay fever slowing me down, but I haven't been as productive as I like. If this is the new normal, so be it; I'm sick of regretting what I haven't done.

I had a Bowen Technique massage on Wednesday, which I think worked well but I have picked up many bad habits over the years, mostly when I sit, so there'll be a few more appointments forthcoming. I had to write a check for Kathleen, (had to think what to write on which line!) and I was startled it was Aug 31. Where has the year gone?! 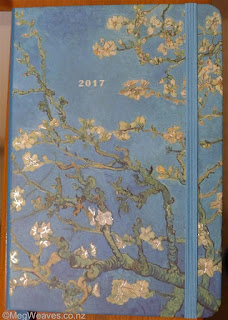 On my way home, I bought a 16-month diary for 2017 starting Sept 1 and began writing a few lines of what I did each day. This way I hope to reduce the missing weeks and months in the coming year. The cover looks like van Gogh's "Almond Blossoms" but with glittery bits; there is no mention of it anywhere in the book so I don't know what the deal is, but it cheers me up.

I woke up this morning at 5.30AM panicked I forgot to set the alarm, so I set it and tried to go back to sleep. When the radio came on, it wasn't the regular news program so I was sure I had the wrong station, (which is hard since the radios in our house have been tuned into one station for >21 years,) but it was the usual station, running a weekend program. Frantic, I checked three places on my laptop to discover it was Sunday! Instead of feeling lucky for an "extra" day, I was exhausted and fell asleep. What was that all about??