Vincent, Ben and I in Melbourne

The exhibition.  It was immensely satisfying.

From the reading before the trip and my less-than-thrilling experience in Auckland, (sixth para,) I expected a smallish exhibition with not too many of his most famous paintings. That turned out to be the case, and a blessing. Compared to what I would expect of a painting exhibition, (nobody said this is a painting exhibition, though,) there were many more sketches; prints of other artists' paintings, the likes of which Vincent sold in his short art dealer career, and later studied and copied; and too many Japanese woodblock prints, which were in vogue after first appearing in Exposition universelle of 1867 and he and Theo collected.

I didn't count but there were perhaps around 40 oils, and at least two tiny, extremely detailed watercolors. Most/all paintings had glass in front but the lighting was good I had to look from all direction to check; at least one piece was badly situated, though, with the green glare of the exit sign dominant from my height. I was obsessed with this glass issue this exhibition, as some of his paintings glistened, making them look less Vincent-esque, (or rather, my preconceived notion of his work,) and I wondered if it was the glass or an extra layer of varnish. This was noticeable perhaps due to the short distance allowed to view, the lack of crowd, or the works being hung lower, compared to my previous Vincent experiences. I could see the grooves of the impasto, and where the peaks were flattened because he rolled up a lot before completely drying to post to Theo, I'd like to think. If I had another chance, I'd go looking for his finger prints.

Before we left home, I was told Tuesdays tended to be quiet, and once there, to come in at 9AM when the gallery opens. That's what we did; we were about the 20th in the queue at the main door, and perhaps 12th for the tickets. We did the first round in relative peace and quiet, and after a coffee, went back in, this time competing with a crowd that included a few best-behaving school groups I've ever seen in art exhibitions. And then we went home once, but I am a fan of art galleries just before closing and we couldn't help ourselves and returned at 4 for the last hour.

Having less well-known pieces and being able to stand close allowed us to look more carefully. One of the most interesting discoveries was his use/distribution of details: in his heyday of heaping impasto, he loaded details in some parts of the paintings while just covering the canvas with a thin layer in others. (Ben joked that he ran out of paint for the day.) This made the eyes linger on the rich, layered area in the way they do on focused areas of a photograph. This was most evident in our favorite piece, The Green Vineyard, (October 2-3, 1888, Arles,) in which if you divided the painting horizontally into five nearly equal sections, the middle section and the one below were the richest, followed by the right half (?) of the top section and the central part of the second from top. And on my screen, this linked photo is pretty darned close to the colors I remember.

The official line is colors burst into Vincent's work after arriving in Paris, but I found it wasn't necessarily so. He indeed used bright colors to great effect, so perhaps mixing more hues after Paris would be more accurate. My recollection of Planting Potatoes, (September 1884, Nuenen,) has a darker (but not blacker) sky and browner earth, making the pale orange sunset all the more starker than the linked photo. Likewise I enjoyed the intended/unintended abstraction of the human form; he struggled with human proportions and they are often inaccurate, but the earlier, blockier shapes are funny and compassionate. Potato Digging (five figures), (August 1883, The Hague,) in my mind, was much more vibrant and adorably naive. Suffice it to say, his Dutch paintings were far from all Potato Eaters!

If we are examining seasons, I would have liked to have seen a couple from his dark Drenthe days, but that's nobody's fault but his, as he suddenly decided to leave town and all his possessions. Also from The Hague when he had a glimpse of a "family" life he craved, and was presumably as happy as Vincent was able. (And seasons don't need to be confined to the country, do they?) There were more from his Nuenen days than I expected, fewer flowers-in-vases from Paris, proportionately few of his more famous Arles and Saint-Rémy paintings, giving it a distinct impression of very short summers in the South of France, but a good number from Auvers-sur-Oise considering the very short "stay" there. Alas, no weaver paintings, as we had one of the worst jobs ever, stuck in our holes of houses in the dark toiling away, regardless of the season!

I'm finicky about exhibition catalogues. I don't have faith in the colors, many are ridiculously expensive and/or weighs a ton and a half, a few are light on content. This, though, had many photos of works not included in the exhibition, and lots of text for the size of the exhibition, so even though the colors are not at all how I remember, and it weighed in at well over 2kg, paperback, (NGV didn't bother with hardcover; I wonder why!) I brought one home.

When translated into photographs, it is the colors, shapes and lines of paintings that appeal the most, so some of our favorites from the exhibition made ho-hum postcards, (many weren't made into postcards at all,) while some colorful but not-as-intriguing-in-person-on-this-occasion works looked great on merchandises. We came home with not even a postcard, unheard of for moi.

I also saw my very first Rothko at the same gallery, a pale pink-orange job and rather flat. (We went around their permanent collection on Saturday, well before approaching Vincent.) I was terribly disappointed.

But it was great fun looking at Vincent's work with Ben, his first time viewing in person. He loves landscape photography so he enjoyed the subject; typically he noticed strange and minute details. It's wonderful we can keep talking about the exhibition and relive the experience over and over. I think Vincent has a new fan. 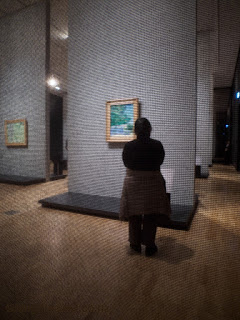