Dinosaurs and Exhibitions Part 3 of 3 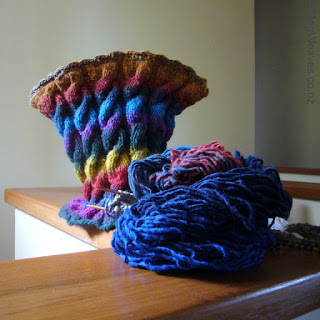 Ben's Ceratopsian beanie. I finished one ball and had to continue with another in a different colorway but I think it worked well. (See where the bright blue-teal turns dark?)  I started another with the rest of the second ball and need a third one, and they have a beautiful mostly-blues colorway so a good excuse to get that.

We were in Welly for one night and came home late last night and I've been exhausted. Lots of folks are in this unusual heat. I was supposed to meet with Kath Bee for the first time in a long while tomorrow morning,  until I heard a knock on my door this morning; turns out I proposed meeting today, and all this time I thought our date was tomorrow. Anyway, we had a good catch up. Me in my not-for-public-viewing T shirt, she in a cute dress and makeup on. I missed her while she lived in Auckland, such a genuine person.

Back in New Zealand; at Dunedin Art Gallery, we caught an intriguing, and slightly spooky, sculpture exhibition by Frances Upritchard, and the fabulous Gordon Walters retrospective. The former was slightly spooky but irresistible in the piece's hard-to-interpret (or blank) expressions. Her few paintings were attractive in their simplicity, the style hard for me to emulate because I keep adding until it's too late. 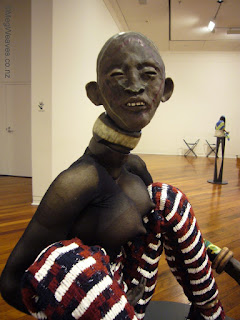 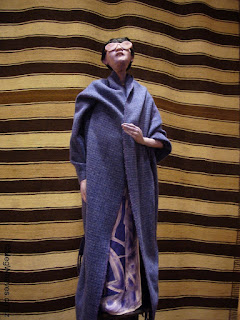 Upridchard uses a lot of textiles in her sculptures beyond just garments but I wasn't able to find their origins; perhaps I'm reading too much into it as many could have been attic/charity store finds.

See what I mean?

The second exhibition was fascinating and rewarding to us, puzzling and unsatisfying to the Cadys, making all of us realize backgrounds of artist/works/society can enhance viewing experience. In some cases.

Though I've never read up on the man or the era so this is all conjecture but Gordon Walters' paintings are, to use a much-overused term, iconic in, and of, New Zealand. His work is so widely circulated one often encounters them on the walls of many/most New Zealand art institutions. And they are painted done by hand, often with gouache, and not created mechanically. But I think his importance comes from being a Pakeha who looked around him back in the 1950's, (when I suspect the umbilical cord was still firmly attached to England,) and found his identity in the flora of this land, in the koru.

I can hear uproar for/against a Pakeha using New Zealand's nature as his motif, from both sides; this might have been the start of open discussion/argument over cultural appropriation. But he kept churning paintings, modifying and improving, and collectively helped form New Zealand identity to New Zealanders of all ilk. Just look at the long-list for the 2916 NZ Flag (change) referendum submitted by professionals and amateurs. (Note: again, I haven't read enough to know of others who have contributed to this ingrained NZ visual identity.) If that doesn't make his work iconic, hum...

Here is his Wiki entry. The Cadys thought the paintings were of dots and stripes, which is exactly what I used to think; I never understood the significance of Waters' work over any other modern/abstracts with dots and stripes. I was confident, and ignorant, I dated them to the 1980's, and decided they were computer-generated prints. Live and learn. I'm glad we took our time at this exhibition; now when I see his work, I get a tad teary.

I was busy reading panels, watching videos and admiring the paintings I didn't get good shots so this is the only one I saved. But there were a few I found of textile interest; most of these were smaller and, ahem, not famous. I found myself more drawn to the wobblier paintings, i.e. not straight lines and perfect circles.

Ever since we decided to go to Dunedin I looked forward to Otago Museum's Pacific Cultures rooms where I first encountered Torres Strait Islands artefacts 16 years ago; they and Auckland museum have more than I've ever been able to find in Australia so far. This time around, however, I couldn't decipher their display logic/scheme and found fewer items from Torres Strait. There were more Pacific combs and their Tangata Whenua display was much more exciting than I remembered so they more than made up for it. 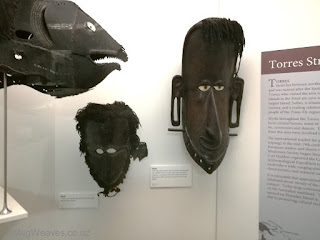 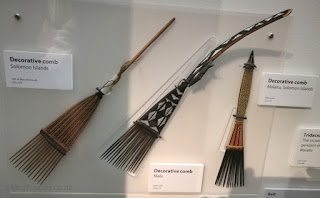 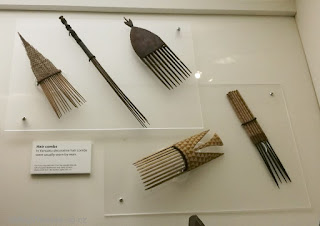 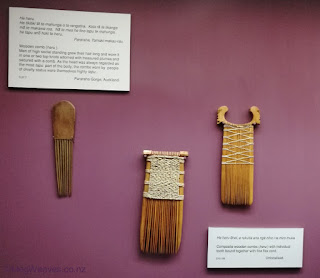 Also on this trip Ben and I also found strangely drawn to dinosaurs after seeing a "film" in their planetarium, and rushed to get tickets to see the exhibition 45 minutes before closing. The exhibition itself was OK, mainly geared for kids, I think, but we had an interesting discussion with one of the staff who was a humanities specialist, not dinosaurs, about convergent evolution.

Then we went to the town of Oamaru, but this post is long enough I'll make it a separate one. Here's a cute write-up in the Guardian a while back as a teaser.

Deep South has many more art places of interest; Gore's "Goreggenheim", the East Southland Gallery, (Hotere, Hotere, Hotere; where is the museum website;) Dunedin's Hocken Library and many, many more; Oamaru has a few, but the one I completely forgot on the day was Janet Frame's childhood home.

But this concludes my exhibitions spiel for for the last six weeks. And now for a few pics: 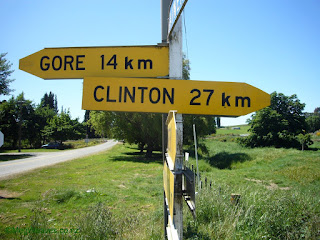 We had to zip through Gore because I wanted to shoot one of these signs; find my hellebore grower east of Clinton, (we drove on dirt roads bearing parts of his business name for an hour but not the one bearing his family name because it looked like a private driveway, which turned out to be the right one; oh, dear; oh well;) and had to get to Dunedin while we still had daylight so we can find the tricky driveway to the AirBnB. 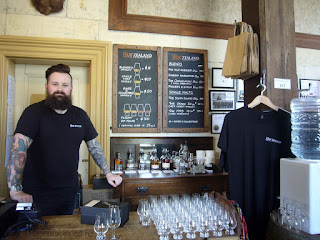 Ben's new mate Matthew at The New Zealand Whiskey Company, part of the reason I forgot about Janet Frame. 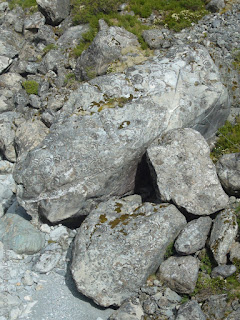