Mathematical and Other Mayhem

Saturday after the last post - I knitted.
Sunday - I had a Math mayhem. Well, more like a senior brain freeze. I really like the doodle for the gray scarf so I started a new draft with three-end blocks of five. Except suddenly I started thinking I could use all five blocks for the tiny squares, (pattern), so I tried to imitate the doodle and couldn't figure out why it wasn't working. Then Fiberworks mucked up my file; I usually use maximum treadles while working out designs but when I filed and later reopened the file, only the first few treadles existed, so I had to rework it all over again. It's happens to me often but it's so erratic I can't isolate the circumstances well enough to explain it to Ingrid so Bob can help.
Anyhoo, I found the error of my ways, and wondered if twill is the right way or if I should reconsider a tied weave; and if I'm sticking to twill, would I rather do another fussy twill with, say, two clasped wefts, and if so, what yarns to go with this very fine warp. Then I knitted. 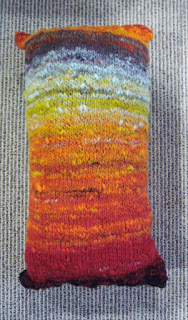 Monday - After a weird night of insomnia and an hour and a half of sleep, I got up sluggish and, although I had planned to work in the stash room, I knitted and finished the cushion cover.
Tuesday - I spent almost the whole day in the kitchen. Didn't make it to the stash room even though that was the plan; it's getting dire - not the stash room but my plans.
Wednesday - Town day; highlights included the film, "Tea with the Dames"; a brisk walk by a river in town; (I've wanted to go out for a while during our beautiful cold spell, but once the cold hurt the ear so I've stayed inside; yesterday I so needed the exercise so I braved it for an hour and it was fabulously refreshing;) and the hour at Volume talking about books, art/art making, my stash room, and Stella's upcoming Pecha Kucha; Thomas and I complied about Facebook.
Lowlights were my rant-with-a-warning with Suter's temporary shop manager after seeing the textiles whose space gets smaller and less attractive every time. This is now a bad break up; for now I plan to give it some time after a new shop manager is appointed, but I might just quit suddenly. Ever resourceful, Stella had a novel advice: how about I make things without thinking of selling, and just put them online? Then I went to my third appointment with Doc Karl in one month, fourth in five weeks! After three course of different antibiotics, I'm now on strong nasal spray, strong antihistamine and some kind of steroids! But he said my ear is looking better, so I'm hoping to the end of airplane ears really soon.
Today - I was planning to spend the day in the stash room taking care of everything except the books as soon as the room warmed up. So I had a wee play with needlepoint, because in the film yesterday there were many cushions with needlepoint or cross-stitched covers at Dame Joan Plowright's place. I got started, and them Mom rang early for Skype and we were on for two and a half hours, (!!) and I was exhausted and it was too late to venture into the stash room.  I needle-pointed worked a little longer, cleaned the kitchen, and started dinner enough so Ben can finish the job.
My next project, in the style of modern painting that has much more ideas than visible interest, in a few dirty yellows, ("mustard" shouted Stella,) and different naturals including one light gray brown and one pale olive green, and probably my biggest needlepoint project so far. And look, my three-year diary matches so well. 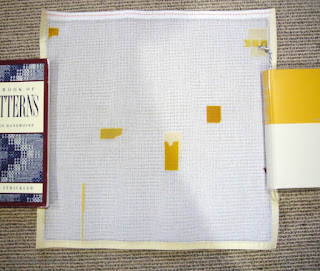 The problem is, I decided to spread out the yellows, mustards, freely to create points of interest, rather than starting from one end as usual. I was so careful to copy the direction of the first shape, and after six, crikey, I discovered I worked three top-right-to-bottom-left and three top-left-to-bottom-right.
I could be careful and make the rest go in one direction, but that would make the three in the other direction "wrong", so I'm going to disregard the directions and later think of something where the two directions meet. That's the plan, though who knows what I can actually manage.
Tomorrow is another town day; blood test; lunch with Sam and Annabelle, only the second time seeing them together since our 2014 exhibition; another brisk walk, (I hope it's cold;) with the day probably ending at Volume. Nice!