My ears are still weird, but I had a lot of energy yesterday so I wove the achromatic warp. Standing up straight and looking at the whole width of the piece one second, leaning down to clasp the wefts the next; LOL, it was so the wrong job! If I didn't have vertigo before in the morning, I sure felt woozy after a few repeats. But I enjoyed the task; extremely slow, perhaps I managed 10cm in all, but I like the look of clasp-weft pieces, and I love it achromatic.

But I also miss the swish-swish weaving, (or in my case it's more su-wooooooo-sh-su-wooooooo-sh,) so I put the pale gray merino on the big loom. 28/2, I think I'm weaving with it for the first time, so I put it in the raddle at 32EPI, but I have to sample. Perhaps 36EPI for fluffy cashmere weft/s, and 40 to 42EPI for skinny silk weft/s. I don't have a draft yet; I'm thinking of a tied weave, but I have to relearn them first, and then make some up. I can probably get three pieces after sampling and I'd like to have at least two drafts with the same threading. 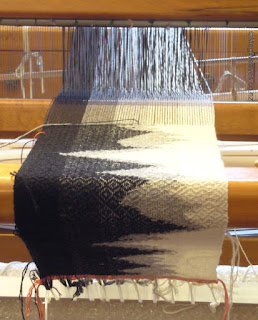 I wove again this morning, but it was even slower. I manage roughly 7-9cm per "sitting", or an hour and a big, although some days I can do one and a half sitting; the second is always shorter. Hum...