I haven't forgotten about Japan trip posts. So you know.

The commission blanket is on hold. I found perfect colors to match the client's cushion cover, and needed to order just one more color, but my source is out of that color, (and no other,) and don't know when it'll become available. I can of course build the project on colors I have, or think of something entirely different. I'm opting to put it on hold.

Syrie is never far from my mind, but there is a possibility it's become about Gaza, Syria and now Pigeon Valley fire. With that last addition, and seeing wildfire flames from our own windows, my ideas may change. Or not.

I wrote previously I was thinking of putting this orange warp while I think about the commission and Syrie. To mix things up, I split that warp and inserted another small warp in the middle on the spur of the moment. And because of the colors, my first thought was satin, except just all over satin would be boring, (it's not silk, either...) so not having any idea for weeks, (and again, I blame the heat!) I started reading about tied weaves, one of those ideas I put on the back burner some time ago.

You know how bad I am at understanding weaving when it's written in words. Day One I read the same sentences over and over and over and fell asleep several times. Three hours on I had read about three paragraphs and was completely fed up. Day Two, I tried reading parts out loud; comprehension wasn't any better but I felt slightly less frustrated, and had a pleasant nap. Then came Day Three and suddenly all the words fell into place. I must have finished and understood half a dozen articles in Best of Weaver's, and skimmed through a few others on the subject. Phew.

My biggest problem was, I've always designed with the warp in the first instance, then when I start to sample I see warp+weft, so mine are never warp-faced per se. While in tied weaves designs are made up of pattern wefts in the first instance. So even with the assistance of drafts, illustrations and photographs, understanding the text required a paradigm shift. When I picked up on this fact, I started to understand what the authors meant, although whether it will work as I start on drafts is uncertain.

There are so many ways to approach tied weaves, and I've looked at Summer & Winter, Bergman and Quigley. I had to draw a mind-map-like notes to see how many paths I have, and how they relate to each other. 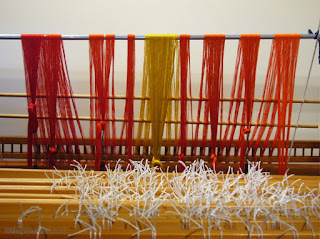