The Cost and Reward of Depression / Changing Outlook

Hello. Seven weeks since the last post? I hope you survived the festive season if you celebrate and  crazy weather if you had it. We've had a heatwave; the season started out cool and occasionally wet, turning into endless days of, (OK, maybe nine?) 29C-at-1AM, no rain and high winds. We had 32C a few days and it might have been the hottest equal we experienced in this house. It's cooled down a while, but going back up this week. Some days I laid down on the floor reading because sitting up, let alone getting up on the chair, was perceptibly hotter. I stopped eating ice cream and moved on to popsicles, then quit that and have been sucking on ice cubes. Low cal and virtually free!

Let me bunch up the non-weaving items, as much as I can remember, and get them out of the way.

By far the biggest thing is the Pigeon Valley Fire, not totally unexpected with the weather but still shocking. At the moment it's the fourth largest wildfire in New Zealand and we're on Day Seven. Burning 20km southwest of us, we can see the entire ridgeway and saw huge flames and plumes smoke, (when the wind wasn't blowing the latter our way,) but it's been better since Day Five. We're told, to completely eradicate the hot spots will take a month, but it's hoped that, weather (i.e. wind, because we're not forecast to have any precipitation for at least another fortnight,) permitting, yesterday afternoon was a turning point and things are going to calm down. 2,300ha is the biggest number I've seen for the area, but there has been no injuries, one hospitalized for smoke inhalation, and one house lost. (The largest fire ever in New Zealand, and the current one in Tasmania was/is roughly 30,000ha, while Australia have seen 100,000ha events!) But then we've had two unrelated fires due to crazies, one right in town, (someone lost a deck,) so we remain vigilant.

Everybody is doing what s/he can; we brought towels and bedding, because they were what we had among yesterday's request list. Social media has done a superb job; I've heard this but it's the first time I've had to "use" it. I also spent some of my weaving money to buy let's just say a large amount of feminine products. It wasn't until I heard after the Christchurch earthquake that women hesitate to ask sometimes, but when you need them, you need them; and we know evacuees and volunteers are all going to synch, right? Anyway, the fire is on-going. 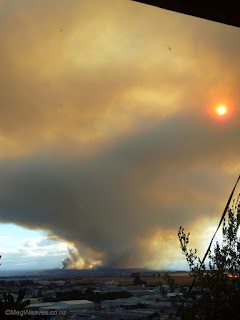 Sunset, Day Two; horizontally, the fire is roughly three times as wide now
but mostly on the other side of the ridgeway so we can't see much. These days,
our day start just before 7AM when some of the helicopters leave the airport,
and go into relaxation mode just before 9PM when they come back.

Much less significant but still a biggie for us was we cleaned the kitchen. We used to do this every year during Ben's summer break, and it used to take one day plus some hours to clean the oven, but this year we spent six and a half days including the oven, nine days if you include the three in between we couldn't be bothered. (It was the start of the heatwave.) The duration is a result of accumulated yuck; my guilt-induced inability to throw out plastics, saving everything until we have a better option than recycling, which hasn't happened; and of course, old-ing.

Depression was the turning point. Years before, we actually looked forward to the annual kitchen clean, if not to the tasks then to the refreshing new resolve afterwards. Then for some years I was so completely overwhelmed even the thought of having to think about it brought me close to tears. Then I started random abbreviated stints from time to time, but it's not the same as an all-at-once comprehensive job. Anyway, we washed everything that could be washed, including the floor, ceiling and walls; threw away a few things, and reorganized where we put things, not according to styles or function but based on frequency of use, and it feels so good.

In fact, I can't stop cooking, even in the heat. Ben's kept up with weekend smoked salmon and made exotic curries; I've slow-roasted neighbor Duane's plums gazillion times and a large paint bucket full of Sally's as well, baked a cake and some biscotti, and even tried vegetarian and vegan recipes. This summer's fad Chez Nakagawa, though, has been coleslaw: some days when it's too hot to cook or eat, we dig into the fridge for our constant supply of creative coleslaw and nibble. 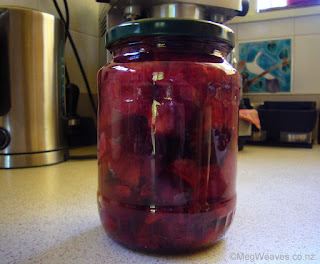 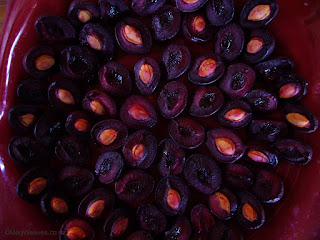 Sally's plums. I've been experimenting with oven temperature and duration to learn
how to make liquid-y vs in-tact results; I discovered the latter to be
so intense and pleasurable, almost decadent! I'm doing the same with tomatoes.

I sewed five pairs of boxer short of various length for both of us, not just because we needed more in this heat, but because I wanted to improve my skills. Like I did with weaving years ago, I found myself slowing down to do each task deliberately, and though the output may not have been any better, I enjoyed the process. Then I moved on to try to make a simple pattern off an old pair of pants, but found the process harder than I anticipated, (I've done this once with a vest years ago which was super easy and useful;) this last effort is resting under the couch.

The dirty kitchen and the amount of time/energy it took to clean is the cost of depression. There's much more left to do in this house, not to mention the vast wilderness outside. I have to tackle them in due course, but I can only do it on my own terms. I even gardened for one day; I got dizzy on about Hour Five in spite of hydration. The sun has been so strong going outside to weed a few pots in the morning makes my arms turn pink, inflamed and terribly itchy. This weekend Ben and I did one hour - we weren't sure if we were breathing in particles so we quit while ahead - and until it's cooler, this may be the saner approach.

But depression has not been all bad; it taught me how to find one thing at the moment which doesn't overwhelm me, and to concentrate on it. It's helped me work outside my perceived square, or look at things from a different angle, or work incrementally, or work without knowing where I'm going. At times I miss this part of depression, but at other times, when the circumstances are right, I can put myself into this mode. This is the reward.

In fact, I've felt so normal, which is refreshing. I have a slightly bigger picture of life, of time and priorities, if I don't/can't do something, I don't feel guilty but just remember to do it another time. I feel as if I can look at my life from a slightly higher position. I can manage housework incrementally without lists and cover most areas evenly; this is so new, or it's been too long. It may also mean I'm slowing down to live more deliberately, paying attention to the moment, and it has a lot to do with my thinking and saying out loud I'm now retired. Lucky me, I can still do the same thing, but I feel less... "responsible" about weaving.

Laura Fry wrote this about blogging a while back. I sometimes think about it, but less often now. I blog to keep a record of my life and weaving, and as therapy. While I miss the robust friendships that emerged some years back, I'm OK if I'm shouting in an empty stone cathedral once again. Neither do I feel the same impulse to share every thought, (I used to feel more than a little embarrassed about it,) but prefer to think things through and no longer worry about thoughts that disappear. More generally, I feel perhaps for the first time I'm in the middle of my life, and what I think/know should be the starting point; what (I suspect) others say exist outside of me so I can choose which are important to me and when. Who would have imagined, at 60 to boot!

At the start of the summer, I resolved to further explore printing and needlepoint. That weakened in the heatwave, and I'll get on to it in due course, but I'm into cooking and cooking comes more naturally to me. I've also resumed reading books, real ones made of paper, and what a pleasure that is. I draw occasionally, see friends, sometimes in very different circumstances: a whole afternoon picnicking near a river and playing badminton with young men among others! Yes, I do feel so normal, and except for the heat and the fire, this summer has been exceptionally delightful.
Posted by Meg at 2/11/2019 09:47:00 PM