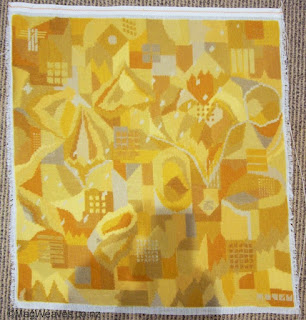 I finished the needlepoint piece yesterday. I can't take pics today because it's been raining cats, dogs and monkeys. Suffice it to say, it's rough compared to last year's, disappointing, but more adventurous, which we're supposed to be with these experimentation, n'est-ce pas? 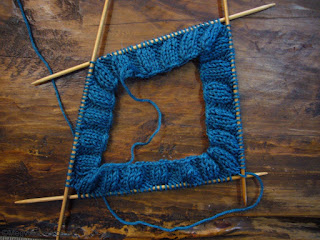 Also, Ben's beanie is finally under way. Last night I had five false starts; I hope this is about the right circumference. I could learn how to do this correctly from the start, but heck, if many false starts work... :-D (It's a nice saturated blue-green; a tad greener than the sweater.)

Last year I played around with weaving Syrie for RAW, but of course I was nowhere near even starting it. When I didn't hear about this exhibition April/May this year, (the show was in June last year,) I was disappointed, wondering if it was unsuccessful, but it's on a little later, and in a better time of the year for art shows.

On re/reading the specs: "RAW aims to showcase works:
First point, check; second point, check. But the third; I happen to think humans can't separate themselves from the "culture" they live in. Then there's my case: Japan, convent school, family configuration, Minnesota, New Zealand, everything I've ever read/heard/researched/seen/touched, what else? I realize I'm allowed to pick influence I like and discard others, except they are not separate components, just colors that make up the picture that is me. It's hard to separate/purge/keep some without the whole. I have no idea what I'm going to do, but I'd love to take part. I regret I didn't go see the show last year, but I decided to think that is a good thing; I'll be unencumbered by influences. This is due early September.

I'm also taking part in a semi-secret project for a local art charity; suffice it to say I have to put it on a 12"x12" canvas. I've pulled out my six framed Go Figure pieces; I enjoyed making them, I still like them, and maybe an idea or three will emerge from gazing at them. This is due in, oh gee, 2.5 weeks.

I rethreaded some more of the cotton warp on Wednesday, about 2/17 of the width; I've done 8/17 in all. I can't wait to weave the hellebore pieces, and the rethreading itself is not bad but the sitting on the tiny, folding "fishing" chair is hard on the old bod. Maybe I can get another 2/17 done today.

I also want to zoom right ahead and move onto the commission blanket before it gets warmer/hot; an added incentive is a new commission, a toddler blanket, which can be worked on the same warp. The warp colors have been decided in my head, but the threading needs to be versatile, one for an elegant couch blanket for a grownup and another drag blanket for a baby, gender not yet known, whose parents are from an exotic land. I ordered six colors for the latter weft, so the commission money is already spent, but this is going to be a new experience for me. More later when I start working on them.

I weeded about one-third of my hellebore patch recently, and they are coming into bloom already, but we've had a lot of rain and some wind due to rapid temp changes, things haven't worked out well, until yesterday afternoon when it was perfectly chilly, cloudy, still, just the way I like. But I was determined to finish the needlepoint, so that's what I did. Ah, nothing like being sensible.

Speaking of rain, remember the unknown person who emailed me for coffee? Well, I couldn't meet her on the first appointed time because I got overheated in a meeting that Wednesday, and I was half an hour late in letting her know I wasn't coming. My bad. We had a second date last Friday, and I decided to take a different bus line, so I looked for the but stop, which took me nearly 45 minutes to get to, (I knew this and was prepared,) arrived 15 minutes early. The bus came a couple of minutes late, and drove right passed me in bucketing rain! I rang the bus company, rather desperate, the rain was coming down even harder, and there is little recourse in Nelson in these situations, so they sent a young ops manager to drive me to the cafe. Which was nice; I planned to ring a cab and take the receipt to the bus office to demand a refund.

I arrived at the cafe between 10-15 minutes late, drenched, a black Stay Puft Marshmallow Man in my sister's Soccer Mom puffy coat. I should have asked the two ladies already seated if either was she, but I didn't because I was a wet and embarrassed, figuring if she must have some idea what I look like. Neither approached me, I texted her twice, and waited for 45 minutes, all to no avail, and haven't heard since. It was a little disappointing because it's always exciting to meet another maker, massage each other's right hemisphere and talk making, but I tried the best I could. So it was nice to get the commission two days later. The weaving goddess taketh; the weaving goddess giveth.