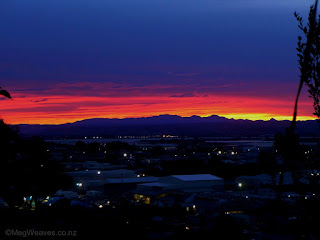 Day 15, April 9. Sunset has been beautiful almost every night. It's facile to say the reduction in traffic/industry causes it, but I can't help remembering the weather pre-2000, an arbitrary year, but it's when I noticed life in New Zealand was changing so quickly towards the thing-centric society we thought we left behind. Also sunsets were sensational more often until a little after 2000. Then again, particles in the air makes lovely sunsets; someone said sunsets in the African savanna are anticlimactic because the air is clean and the sun just drops.

I got fed up not getting things done I changed into gardening clothes in the morning. I knew I'd miss Jacinda's 1PM update, but I was fed up by me, and since I didn't have a better idea, out I went to clean the patio. As has become the pattern, I got a fraction of what I'd hoped done, but still, it's more than nothing, and I'll finish the rest tomorrow. 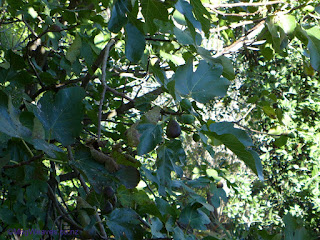 Day 16, April 10. Start of Ben's Easter Holiday. I had an ultra slow start to the day. While I scrolled down the page looking at the latest numbers and the curves on graphs, I heard the warm sound of a handsaw, starting tentatively, (though this whoever not as tentative as I,) then steadily and fast, then slowing down before stopping. Usually. Round two started at top speed, continuous sans rhythm, I wasn't sure if it was a handsaw, but it finished in the familiar way. Building/fixing? Pruning?

We thought to tackle the top branches of the Pohutukawa for better sunset-viewing, but tidied closer to the ground far longer than we planned before Ben started on said branches. Ben stood on the stairway reaching out but we may have gotten one-third or one-half at best, more on the right side. We still may get better sunsets but probably not the last bit. Shall wait until tomorrow; I weeded underneath until it was too dark to see, while Ben cooked dinner; we can only assume tonight's was another fabulous show. 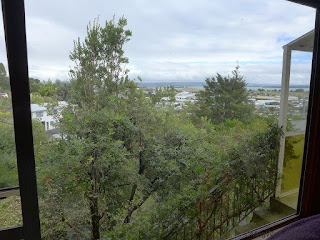 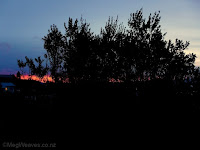 (Sunset, Day 15)
Day 17, April 11. (Photo taken on Day 18.) Ben had a second go, standing on the steps and chomping at the taller branches of Pohutukawa, as well as pruning many others around it, the reasons for which were not exactly clear to me, but hey, we were outside doing something, weren't we? The weather was sunny but cool/warm and at different times we counted four or five other families outside doing similar.

I, on the other hand, worked on taking as much of the lilac bush as possible, a near-annual event. It used to flower beautifully, then suddenly mildew took over. For almost a decade I dug up the smaller shoots and cut the larger branches to the ground in the autumn, hoping the new shoots will be healthy; they were at the start, but inevitably got covered in the same white stuff. Nothing around is has been affected, though. Phew.

This year I'm taking out as much as possible, which is a delicate job because it's at the top of a small bank and if I dig too wide the bank may crumble, but if I leave too much, or any, the cycle will continue. (I saw the same mildew this fall on my zucchini and nearly 30 cherry tomatoes, the latter lot yielding exactly zero fruits.)

I, on my third day of "pottering around" have had such awkward muscle pains that when I wanted to kneel/get up, I first had to resolve to do it, make a strategic plan, observe the surrounds, renew my resolve, voice my intentions loudly, and finally, do it. Half of it is plain aches caused by normally dormant muscles revolting, half age, but the third half is caused by an "old injury".

Ben and I used to assume when folks mentioned "old injury" they must have been elite athletes. Well, apparently not so. Mine comes from running in the rain in 2006 and slipping and falling backwards;  Ben's from way back in 2002 when he had got a cut in the arm in a car accident. We both sought adequate medical attention at the time, but felt, "Meh, the rest will heal naturally."

Not so! Mine came back in 2014 one Sunday evening when suddenly I couldn't stand up. I spent two and a half years being seen by a GP, physiotherapists, acupuncturists, a Bowen technique therapist, (who told me she couldn't fix it,) an osteopath who charged me mega$ to chat about his idealistic country living, maybe a couple more, before I gave up. Strange thing about my injury was, I was fine standing up and walking, but I could not stay seated, go up and down stairs, and sometimes the right hip suddenly gave out, and the throbbing kept me awake. Strangely it hasn't been as dire since I stopped going to medical professionals, but I suspect I walk differently now, different from how I used to, still different from the eight years I didn't pay attention to it. But there is no double it's put a giant damper on how I view my abilities, or limitations, as regards physical activities.

Ben most noticeably could not handle the vibration of the weed whacker after a while and stopped whacking the already-lamentably neglected patch under the apple trees.

Though we've always been avid great indoors types, we did go outside more often in the past, and working in our respective patches yesterday we reflected on that. I'm not sure if we "enjoy" gardening, but get a tremendous sense of accomplishment observing the aftermath of deforestation,  birds squawking above us like the seagulls in "Finding Nemo".

And then we look around and observe the vastness of our estate, and sulk a bit. 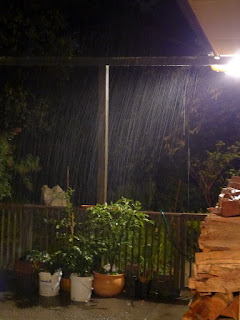 Day 18, April 12. Today was a real non-day. Rain was forecast for some time, but until mid-afternoon it was a cycle of sun and shower. I wanted to weed/decommission the remainder of the pots and finish cleaning the patio, a job I started on Thursday before I was deployed to the north/west quadrant. I planned to get my rain gear and go outside after I cleaned the kitchen, but by then the gray had set in.

The rest of the day was cloudy, moist or wet, and I honestly can't remember what I did. I really don't want to loose the gardening momentum now.

Thunderstorm and wind was forecast for tonight, but so far the worst we're getting is an occasional dose of film set rain. 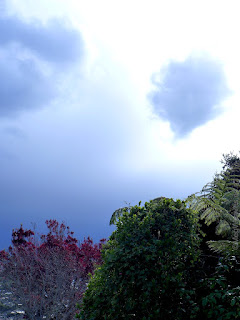 Day 19, April 13, Ben's 57th. When asked if I should put my effort into cake or a meal today, Birthday Boy contemplatively replied, "cupcakes". Cupcakes!? Just when I thought I knew everything about this boy.

Another weird weather day: sun/wind/sun/wind/dark clouds/sun/dark clouds/wind, and rain. Restless. The sun was warm, the wind cold, winter is coming. Except today was all about waiting for cupcakes. Ben reworked the metal mesh for the coffee roaster; I cleaned the kitchen and lined up the ingredients; too cold/windy for bean roasting, Ben did something else; I did laundry; then we found a sunny spot on the carpet, and lay down and checked Facebook.

Finally we tackled another batch of cupcakes, really just spicy cakes made in cupcake molds, another never-to-be-repeated recipe, today with three double shots of espresso. Ben instructed, I assisted, the cakes came out moist, toffee-smelling, and nutmeggy. Yum.

I thought of running out to weed the pots, but hey, today's Ben's day; I was happy to go along with whatever he wanted to do, at his leisurely pace. And it was a totally slow leisurely day. 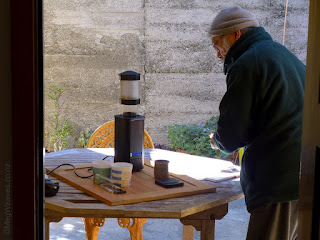 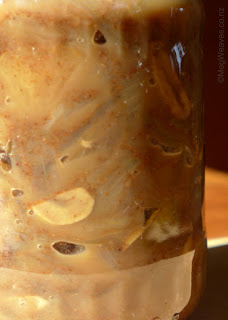 Day 20, April 14. Sunny, chilly and windy, we have the first snow on the hills. As well, fifth and last day of Easter Break, interesting how naturally we slipped into holiday mode; after leisurely perusal of the news/numbers/curves, fragmented discussions, and forgettable breakfasts, I've established a pattern of embarking on cleaning the kitchen somewhere mid-late mornings. Sorry today was the last such.

The temperature called for spicy slow cooking, so in spite of full intentions of weeding in the afternoon when the wind settled, of invitations by art institutions' children's education Youtube channels to show signs of life in the right hemisphere, I cooked standing up until such time that Ben sauntered into the kitchen asking what's for dinner. Results: bacon/onion/lentil thing V2, steamed rice, and unphotogenic but piquant onion chutney. Slow cooking does not always indicate the time required for the ingredients to, er, cook, I guess.

Yes, the simple onion, because I remembered we are not to hoard under the current regime and onions were about the only produce, (besides dried beans,) we have in abundance. But also harvested a couple of nice feijoa recipes for when our always-tardy fruits come a-dropping, and ideas for rehydrated dried fruits, which opens up a universe of possibilities beyond a chutney galley. Blessed are friends who cook. 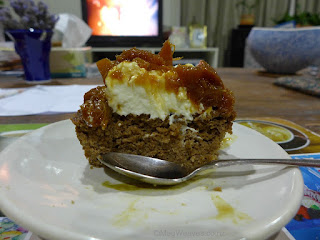 Day 21, April 15. One day is looking a lot like another, except the weather, and what we cook. I don't know if I expect something to happen, but still every day I feel like we're on hold.

With Week 3 finished, there have been talk of whether the lockdown will be over next week, and if so, what happens next. It shouldn't bother me either way, I just go back to my own isolated life.