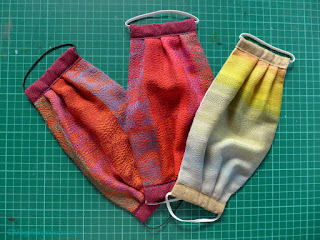 Day 8, April 2. I don't know where the days go, but I finished these three I started yesterday. Take that, Virus; one of a kind handwoven masks!

And now we have far more masks than we'll need in the next 20 years, but Ben wants a couple of more from a particular fabric. I'm regrettably delaying weeding for one more day.

I realized I was missing a form from the Japanese Pension office due sometime around now, so did a whole lot of looking things up, ranting, pacing, and soliciting trusted cousin and her husband's help. In the end, I rang the Pension folks in Japan and as usual they gave me great, decisive answers. Too bad they don't communicate over the net. Ben's right; Pension folks are superb because they have to deal with dotty old folks every day.

Also found out I have to keep filing tax returns even though I'm retired because I "ran a business at a loss" for... ever. I might look into filing myself and dislodge myself from the accountants, but, gee, that's another task that will involve a lot of ranting and pacing. Maybe just looking it up this year and trying it out next year.

Do I make my life unnecessarily complicated? Today was completely like non-lockdown, just a normal frustrating 21C day. But opera was lovely. 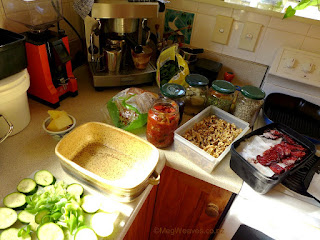 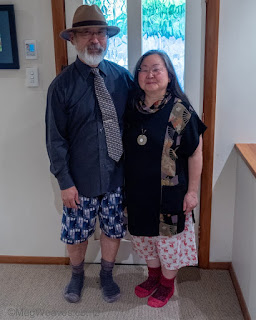 Day 9, April 3. Beautiful day. We had dinner with friends, and had a really lovely time. Although some of us, (me), talked too much, and some of us, (me), shared some evil and morbid thoughts, we also laughed a lot. I did little else today but cook, (and got a glimpse into the instragram mentality,) and chase more news, but it was still a good day.

In fact, I'm all laughed out, I can't think of anything else tonight. So from us to you, good night. 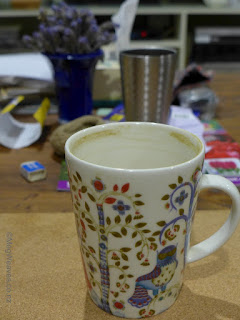 Day 10, April 4. Last night's dinner was delightful; yesterday was so saturated. But other than yesterday, one day is starting to look like any other. Which is pretty much my normal life, but with Ben home every day, I have to ask if today/tomorrow is work day. Several times a day.

It doesn't help that I'm still on sewing duty. I was so unmotivated I couldn't finish, so I'll give it one more day for closure.

I'm also unable to concentrate on anything, even washing dishes, without taking numerous "short" breaks to gaze at the screen. Which makes the days diluted and bland. Even two operas, one French play and many French readings in one day can't make up for a more proactive life. I didn't even finish my first cup of coffee.

Let tomorrow be less this normal and be the other normal. 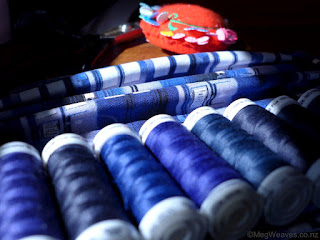 Day 11, April 5. I was finally relieved of mask duties. The delay was my fault; the first Tardis masks were not high/tall (?) enough they covered either Ben's nose or chin but not both. Now he has two in the right size, plus two in black that look really sharp.

On our way to the supermarket I asked Ben to drive past Volume. It was there, charming, full of promises, unharmed, but books usually stacked attractively on a large table at the front were covered with a cloth, the table pulled towards the back. A wee wicker lamp emitted a small yellow light in the almost-sunset. The books held their breath.

I say my life hasn't changed, and at home this is true. Volume has changed, though; its esprit on hold unless or until... And if I were to be completely honest, that moment was the first I realized the magnitude of sacrifices required of this lockdown. 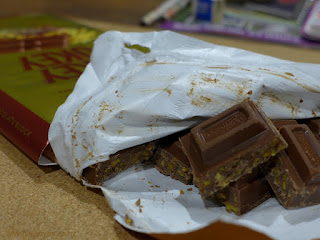 Day 12, April 6. When reading about lockdowns in other countries, before New Zealand started our own, I imagined our days of the Plague to be memorable, that scenes will be imprinted in saturated colors, I would be in a heightened state of awareness, and I would later recall stories in vivid detail.

It hasn't been like that. The days are murky. I try to keep abreast of the ever-changing rules; I watch two updates every day. I keep an eye on the numbers, though they lost meaning a while back. I'm pretty sure I'm doing this right, but I can't move on to doing normal things, like projects.

Of course, it is better this way, than something catastrophic happening, to us or the country, which in these circumstances is eminently possible.

I'm blathering. I can't bring myself to reread what I've written tonight. I hope I wake up tomorrow morning, ready to tackle something.

PS. We-are-not-there-yet/Reactionary/Bloody Bloomfield on Slate.com in a positive light. Let him be struck by lightening after this is over and when Jacinda doesn't need him daily. 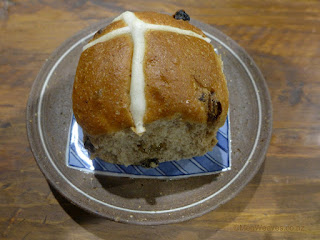 Day 13, April 7. In our 25 years in New Zealand, we bought hot cross buns fewer than five times. Funny how one develops a hankering as soon as there is a perception these are harder to get.

Today I blogged. I chose it over tidying the patio and weeding the pots because the weather looked iffy. Turns out I could have done the outside job just fine, but I chose to blog. Though it feels wrong by societal standards, it was just as important to me, I've been intending to do it, it was a hard job, and I chose it, and I'm glad. Tomorrow, something else.

And didn't that half a bun with butter taste good! 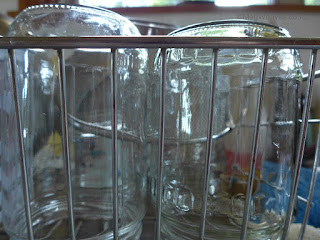 Day 14, April 8. End of Week 2, and according to the initial plan, halfway point of official lockdown. I was in the kitchen for an awfully long time, washing things. I didn't cook, only assembled another lasagna and a salad; finished a jar of Simple (Minded) Pickles, so why four here? I am exhausted.

The quiet is nice. Even though it's interrupted by the occasional vehicles near and far, (surprising how much of it there is,) power tools, lawn mowers, shouting, the usual stuff. But it's quiet more of the time than not. I may be hearing the birds more, but I could be imagining it, too.