Now We Talk about a Plague - Lead Up to Lockdown

I hope you and yours are well, in whatever state of social/physical distancing/isolation you are.

I read recommendations to keep a diary during these unsettling times. Although I agreed, I wanted something not in text; drawing? fabric? an on-going warp? I dithered because I know how terrible I am at "something every day" approach. Then we found ourselves in a national lockdown with two and a half days prior notice. So text it was.

The Lead Up
I had a cough in December/January, something that's been going on intermittently since May-ish of 2018. Since Karl had sold his medical practice while I was in Japan, I was terribly annoyed but went in to see a doctor anyway, hoping to get rid of the cough once and for all. I was prescribed gazillion medications, including steroids. The cough improved as I uncharacteristically obeyed the regimen, but I developped shakes in my shoulders and arms. Preferring not to revisit the doctor in particular, and the practice in general, I stuck it out. Because of the shakes I hesitated to weave beyond sampling, but I tried on February 12, (the pink-wefted start at the bottom,) and felt so weak, I kid you not, I crumbled onto the floor in a fetal position! (I crack up even writing those words, but I did!)

So instead, I attempted to summarize the history of my thinking on Syrie and clarify where I was at. I reread all gazillion posts on the subject, cringe!, started a new post, found it gnarly because the idea mutated over the years, it was impossible to write one orderly coherent post without explaining every little change and detour. I tried different approaches, an interesting exercise in reminding me when/what I changed, learned, decided/discarded, but found no resolution. And my cough came back.

Also at the start of February, I started to pay attention to Corona; it was still called just Corona, and was only in "one place somewhere in China". I ignored the bird flu, swine flu, SARS, learned about MERS only in relation to Corona, and know the name H1N1 only because Ben's initials are HN. (It's the official name for one of the preceding.) At first I thought, oh, another one; I hope it doesn't come to Nelson. Kiwis are inexhaustibly well-travelled, (whenever there is a disaster anywhere in the world, there is a Kiwi who can provide on-the-ground story to our media,) and Nelson is home to disproportionately many. I only started paying attention because some of the first patients/deceased were 60, 61 and 62 years old. Then there was the constant mention of "comorbidity" and diabetes. Gradually Corona took over Syrie.

I read, watched vids and payed attention, while slowly implementing, forcing, changes to how we did things around here. Washing hands and coughing into our elbows were easy, but not touching our faces, I still can't manage. Ben hated having a shower immediately after coming home, but it was at the tail end of summer, still warm, and he got used to it in a week. Disinfecting all surfaces and devices at work with smelly disinfectants at least once a day, he wasn't crazy about and probably embarrassed, but he got used to that as well. By then we were both coughing occasionally.

I read somewhere that worldwide those of us usually very anxious were doing very well because for once there was something real to be anxious about, and we were performing well being practical. Then the first case in New Zealand was reported on February 28.

The problem of Ben's office arose. He has lovely colleagues, but the office is grossly unhealthy. In a department of few than a dozen, one or two are always out sick during the winter months, which had annoyed me for many years. The department being IT, there are many equipment generating heat, with air conditioning which does its job, so nobody thinks of ventilation. The air is stuffy, moist and smelly whenever I visit. There are also too many staff crammed in a relatively small space in Ben's half. The condition would have been similar to the cruise ship stuck in my home town, Yokohama. I started nagging Ben about working from home, for which he's well-equipped already.

But, oh, what a wonderful thing, this Internet. Not only can I find a lot of things about this now-pandemic, but so much free contents, opera!!, available for a time. Even though I was coughing badly, sometimes picturing me coughing up blood as I visited a doctor, telling the other patients, "Not Corona, mine is a wet cough." OK, slight exaggeration but I wasn't well. 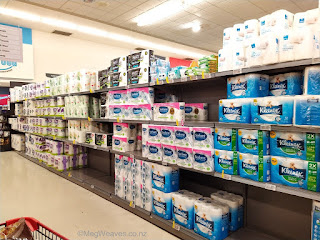 Taken March 15, Panic buying had started in parts of the country, but in Nelson, a few more gaps than usual but mostly as per usual.
Ben gradually came around and intended to work from home the week of Monday, March 16, but suddenly meetings sprouted everywhere to discuss the CEO's sudden announcement, (without consultation with IT,) about better remote access to allow all staff to work from home. And though the school, not just IT, is used to meetings via Skype, all of a sudden Ben had to be present at all of his meetings. Still he declared he would work from home the week of Monday, March 23.

On Saturday, March 21, Prime Minister Jacinda Ardern had a rare public announcement, explaining a four-level national Covid-19 alert system. Two tested positive in Nelson, and dinner at friends was cancelled, (although we had declined because of our coughs.) We went to pick up work equipment, took a detour to the supermarket, (we'd been stocking up a little at a time since mid-February,) and finally set up Ben's home office. 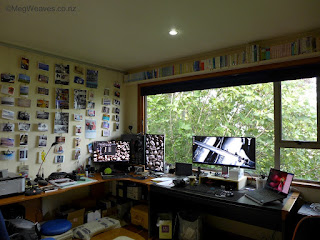 What follows, for the next few/several posts, (and hopefully not interminable,) is largely based on my diary, (which at times have been crammed bullet points,) and Facebook posts.

Day -2, March 23
First day of Ben working from home. He picked up equipment on Saturday and set up workstation so all ready. And with Skype meetings coming up, he had a shower and dressed normally. Admirable. Then the Polytech, [his work place,] announced over 65s and "sick" staff should work from home, so it is now all "official". All I have to do is stop nagging and start obsessively controlling his/our environment.

Then came Jacinda's announcement, shortly after lunch, and it's now real. Code 3 for 48 hours, [actually it was a day and a half,] lockdown for four weeks. About time. I'm relieved, but the food/supply we thought we had plenty/too much of on Saturday started to look a little lacking. Oh, well, we'll go after the official lockdown starts.

We need rules, though. I won't bother Ben while he is "working", and I must say I did well today, but Ben must also clarify if he's having a break or stopped working for the day. I forgive him for coming out to listen to Jacinda, but sometimes he wanders. [He sometimes walks around the campus to clear his head, which I encourage. I forgot this.] Also agreed breakfast and lunch as usual, i.e. we're on our own. Dinner, discuss and take turns. Also, the big bad monitor of his is enough heating for the office. Wonder if Ben now knows why I complain about how sick his office is.

Tired, but very relieved. But also... Ben being home all the time is going to change my days. Got in touch with Barbara/Duane, Kathryn/Tyler, and the troop. Relieved we had the fire place done early. "Talking" to all so many more friends, and they have lots of time now.

Jacinda said to be kind. Is there any other country where that's mentioned?

Day -1, March 24
Feel very relaxed and relieved, especially that Jacinda is at the helm. Of course I think we should have started closing the country when the cruise ship was stuck in Yokohama, and lockdown a fortnight earlier, (we seem to be in the last? Lot already among developped countries,) but kudos to making it four weeks rather than two. Kudos for doing it. Amazed the world is still so concerned about the economy. Personal jobs/income, understandable, but "the economy"!! Let's come out of this alive first, eh.

[I feel smug about having sorted] the firewood and the fire place. Making chicken curry. Got rat poison at the last minute.

Day 0. March 25
Oh, we have one more day of prepping. Panic buying all over; not sure about Nelson. We have more than enough for a while. Ben bored and pacing, (it's only Wednesday!) but also fixed the outside tap, and in our final trip to the Mega Store 2.5 hours before closing, we got a new loo tank. I don't know why we don't do these things when they break, but at least we are on our way. I am relieved we're finally going into lockdown, even though I would have done it earlier. I could punch Mr "We Are Not There Yet", [Dr Ashley Bloomfield, chief executive of the New Zealand Ministry of Health and Director-General of Health,] but since Jacinda relies on him, I'll wait. 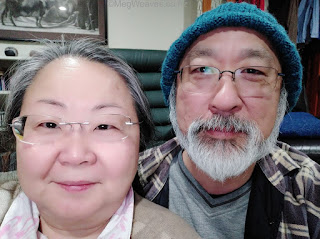