I am uncertain if it's worth my keeping a diary for myself during our second, milder "lockdown", but for symmetry's sake, I voted for it. So here goes. 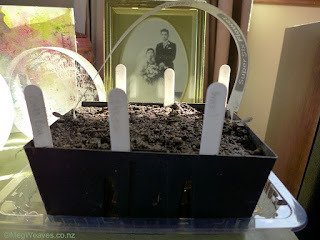 Day 0, August 11. Photo Day 4. At around 9.15PM, Jacinda announced family of four tested positive in South Auckland, so Auckland Region would go into Alert Level 3, the rest of the country into Level 2, as of noon tomorrow, Wednesday, for the time being until the end of Friday. For a week or two, we've been repeatedly told resurgence is a matter of when not if, so here we are. And with election looming, there is of course conspiracy theory from opposition she and Top Doc waited to disclose.

On the one hand the country is familiar with the practice because we'd been free only 102 days. On the other, Level 2 has been hard to recall as it was short, and in my mind "the milder of two between 4 and 1." Nevertheless, other than food shopping, I shall stay put for now.

Kate, with whom we had dinner exactly a week ago, was successful in growing a coffee plant to the point of collecting cherries, peeling, roasting and making two cups. She thought we might be able to start a plant from Ben's green beans, even though it would take a long time to germinate. (Clearly she hasn't tried sowing hellebores.) So I asked Ben which he wanted to try and "for starters" and he gave me Costa Rica, Ethiopia and Brazil. 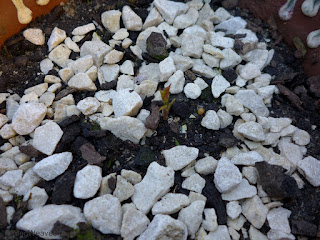 Day 1, August 12. Photo Day 4. I've been pretty good about getting out into the garden these days. But today, with updates at 1PM and 4PM, I dithered in the kitchen just like I used to the last time. The only other thing I did was to have a look at what I hope is the start of a ume plum tree I discovered on Monday, blissfully unaware what might happen in a couple of days. Some time ago Esther​ gave me a pit; though we weren't sure if we can germinate it, this one is in the right position in the right pot, so here's hoping. 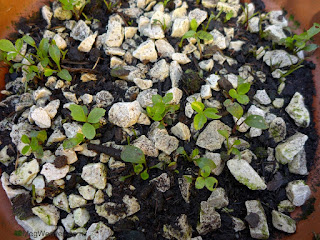 Day 2, August 13. Photo Day 4. There was only the 1PM update today, so afterwards I went outside. (And I was pretty pleased about it.) Among other things, I moved some self-seeded hellebores into pots. I usually move them to less crowded, better-suited positions, but I'm still weeding and better-suited positions are not ready for the babies, and ones I moved were too close to the path they got in the way of more work in the area.

These, though, are one of the two pots in which I sowed seeds from my plants last year. I'd never been able to successfully sow seeds from my own plants but back in June I found both pots full of babies. One pot is going strong, all leaves healthy and true leaves popping up all over, but in this pot more than half the leaves were eaten. Can you see some naked stalks? I flooded the pot in the kitchen sink, hoping the culprits would suffocate or surface to be picked out. Which is why the leaves and pebbles have black specks of dirt. 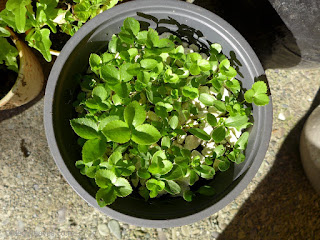 The other pot. I wish I could remember which pot has the interesting pink and green seeds from the "past best-before" rack, and which my most favorite slate, which doesn't produce seeds easily and whose self-seeded babies don't survive.

So utterly sick of American-style parlance and conspiracies by politicians and folks. Stupid is more contagious than the virus. 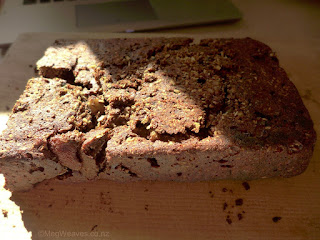 Day 3, August 14. Photo Day 4. I had a completely slack day, gazing at the screen off and on most of the day. (I've been watching UK's archeology program Time Team chronologically; I started this some years ago but got diverted when there weren't as many episodes online. Now, where there is a will, there are episodes.)

We had updates at 1PM and 5.30PM: we'll stay with Level 3 for Auckland and Level 2 for the rest until the end of August 26 unless otherwise announced.

I did manage to bake an OK spelt/rye bread, (something I started during the last lockdown,) and on the fly, made this crumbled cake. Not a crumble, just a cake that crumbles and falls apart. Tastes great, though, with a combination of bitter organic raw cocoa powder an online pharmacy gave us (!!), and my bitter citrus marmaladey concoction.

I could have gone outside for short spurts and I imagined how happy/proud I'd feel, but I didn't. Didn't even knit. Or fold clean laundry.

I oscillate between acute alertness and a complete void/empty-mindedness. I guess they don't call these "Alert" Levels for nothing. It was the same last time, and though I tend to think of the first lockdown as having been unproductive, I did cook a lot and weeded a bit. I just didn't come up with a tangible project other than a diary here, nothing in weaving or drawing I could point to today as a fruit of my labour from that specific time.

I have been wondering about belated, post-lockdown "lockdown" projects, (some are interesting I might still give them a go,) so needless to say as soon as Jacinda mentioned levels, I wondered if this time I can be "good" and stick to a project and if so what that might be.

So far I haven't come up with anything, and not feeling particularly guilty, partly because my hunch is, this time around it's not going to be long for those of us outside Auckland. Fingers crossed. But also, we had a mild winter and an early spring and I have been in a panic trying to catch up with the weeding/transplanting/already-somewhat-too-late pruning. Also, I've been slow but successful in finishing a few long-standing projects dotted all around the house, and would really like to get them out of the way, off the floor, so I don't keep tripping over them or having to vacuum around them.

At another level, as a psychological (??) experiment, it feels more right ("more right"???) to record what I do organically without interfering/manipulating the... what... flow. Also, that's what I did the last time, and for symmetry-sake... 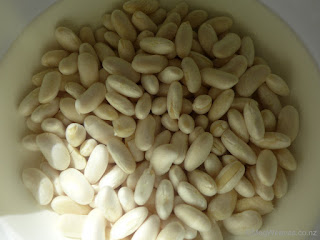 Day 4, August 15, the day known as The End of War Day in Japan. Once again I had a sluggish start to the day, gazing at screens, watched more Time Team, while imagining how good I'd feel if I went outside. After the 1PM update, (it wasn't even Jacinda,) I made chicken curry for dinner, didn't get around to marmalade but washed the fruits, and cooked cannellini.

Ben picked up a big screen from work so the study looks a little nerdy.

It's cool enough tonight we'll light the fire. It's been warmer in the evenings, with fire it's often too hot and without, too cold. Tonight it'll be nice to have fire, watch a bit of telly, and knit some. 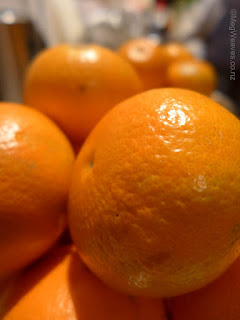 Day 5, August 16. We are both tired. We slept in, uncharacteristically late for Ben. We didn't do much all day. Perhaps I was tired because I wasn't doing anything. We had two cold but calm, sunny days perfect for gardening. I also thought we should go do our favorite walk around the airport. But we didn't.

Is it because we are older so many folks we know are passing? Is it Internet that tell us of these so quickly, even about people we don't know so well?

I feel as though we all need to re-prioritize our lives and do what's important, what please us, but I'm not sure I know what they are at the moment. 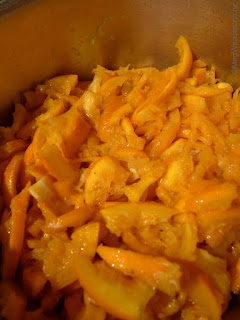 Day 6, August 17. Ben had the day off; he got up as usual, and smoked pork. I got up late, but not as late as the weekend, and started making bitter marmaladey concoction. We watched Jacinda's 10.30 announcement, (election is delayed by one month to mid-October,) ate, watched the top doc's 1PM update, then we both went outside to weed. Oh, I turned off the stove while we were out, so it's cooking again now.

In the last week I've been sent two seed and one bulb catalogues. They are lovely to read and fantasize, but I don't do bulbs well, and I have leftover seeds, so I'll sow them and limit my wish list to just a few, like cornflower.

Truth to tell, I started thinking about the garden late last night and had an annual panic, which kept me awake until 4! We'll never catch up, but we are 3 hours * 2 person closer tonight. 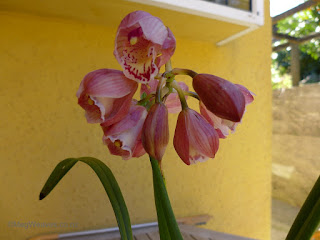 I had ants in two pots last summer so they had a good soak. Otherwise orchids may get fed only when I remember to get orchid food, and are divided every "several" years. :-D This one, after water torture over multiple days, suddenly showed flower buds in May, which is freakish early. The earliest they've flowered in 20+ years has been late August, but this one has been going for three weeks now. I have three others with buds but they are in various stages of early-ish to normal, which means I'll have orchids blooming until nearly Christmas. 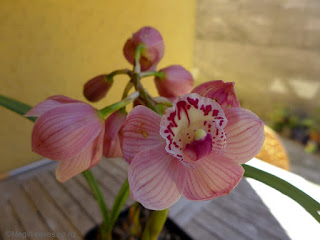 In case you thought this guy still a little tentative, nope. Some orchids seem beaten up because they sat in the windy-and-rain-swept side all winter while we had firewood on the more gentle side. I might move them now since most of the firewood is gone. 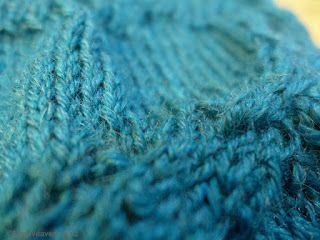