Have I mentioned it's been a mild winter? That was until July, when it turned normal-cold with annoyingly changeable weather. Quite a lot of rainy days, quite a lot of gusts, which means quite a lot of sunny days as well. And of course the rain-one-minute-sun-the-next days. Most annoying were heavy gray days when the sky just couldn't make up its mind so I'd run outside, in between chores, to see if I could... feel the weather. I was quite keen to weed if I could, otherwise loom or projects. I wasted a lot of time to indecision, but got a lot of chores. I swear, Nelson never used to have these sad, miserable, "Japanese" gray days, at least not this many. It's so dark inside I couldn't do art works or color matching even with the lights on.

I missed out in July, (you know I like it outside when it's cold;) I'm also mad at myself for doing something else or not much in May and June when we had better weather. Since the last week of July, though, it's turned warmer and I've been weeding. We are still the C Street Weed Reserve, but I feel more hopeful.

I talk about the weather a lot, don't I? It's a combination of being Japanese and my mom's kid, having grown up in Minnesota, and finally getting the hang of Nelson's weather around 2000 then facing changes like everywhere else since. And I just read we "remain on a La Nina watch." 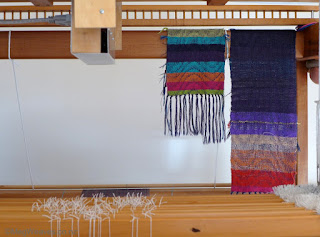 Weaving: I last wove the teal-weft piece in the last post on the day after I posted the last post. :-D Warp ends started breaking that day and the tension got weird so I needed a break and... I haven't gone back. Soon! Above was the view on that last sitting; I have been thinking of multiples of wildly saturated wefts for the second piece. 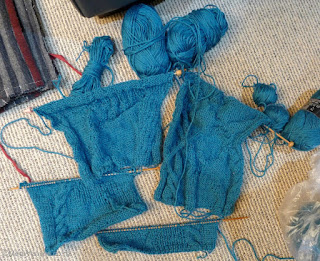 Knitting: I'm not sure if I reported back but I finished the orange cowl/snood by adding three rows of k-p-k-p, just so I can move onto the next project; I've been wearing it, though, on cold mornings/evenings, and it's nice so I think I'll keep it. The new project is an experimental scarf for Ben; I'm recording observations on FB and will collage in a separate post here.

The Sketchbook Project: Last week I decided I'll keep working on it but ignore the deadline. From memory, returning it late means mine misses the tour but will be available in their library, but because I don't even know if the tours are going ahead, I'll finish first and then decide whether I want to send it in or keep it. The main reason for the delay is I got stuck as to what to do beyond the design of the body. I'm also partial to a few layers these days. 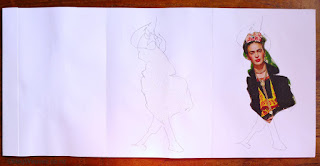 This is the first three you see when you open up the book, unless I add more paper. The middle is white gesso. I've taken out all other shapes and concentrated on just the one, which I often think of as a self-portrait. In fact, I drew quickly folks rushing up and down Trafalgar St between 4.45 and 5.30PM one Friday afternoon years ago, so it's not me. 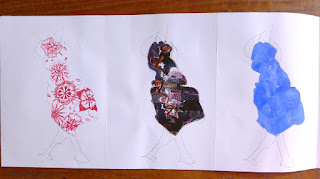 Left half of the center fold. 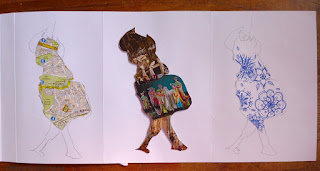 Right half of the center fold. The collaged piece is not glued yet because I'm not sure if I like it or if it belongs here.

The last three. I printed out a flipped outline so I can do random collage on the back and cut out the shape along the printed outline, but of course I glued the collage pieces on the wrong side. But I like the way the people are positioned inside this piece. And when bound between a cover, these are the last figures you'll see, so I might get away with it. 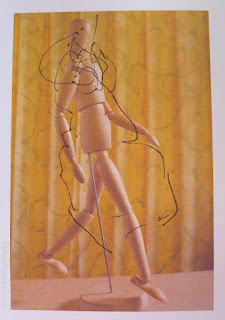 Another idea I may develop.


World: Hiroshima 75 years go today; Nagasaki, Sunday. I've had an unplanned deep dive into photographs of that part of Hiroshima-shi before the bomb so it's been a week of "remembering". Reuters reminded me of numbers I think I used to know as a kid plus some: 78,000 dead on the day, about 140,000 by the end of the year, in a city of 350,000. "By 2019 Japan had recognized the total of deaths from radiation illness and injuries in Hiroshima as 319,186 and in Nagasaki as 182,601." I told you about meeting a poet who was six years old that day: she went to a Hiroshima/medical archive in Tokyo in 1995 or 96 to discover people were not identified by name but by "Human:" followed by a number. When she finally located her family's record, it included her mother's three-month-old glaucoma op.