Goodness, this year is nearly 1/6 finished! What have I been doing?
I successfully weaned myself off of news after the US election and resumed reading printed books, but that only lasted until the Georgia Runoff. I'm OK, though. I was so disgusted after the second non-Impeachment I'm back to reading books. I'm sure I'll follow the trials with glee, or not, but I'm good. Not only am I enjoying a whole bunch of Young Adult novels, and a chaotic selection of audiobooks, but have a mental list of what else to read for the next several months: the list in my head, the books all over the house.
The big loom downstairs look exactly the same as the previous post because I haven't touched it. When I have a threaded loom upstairs, why bother going downstiars, is what I tell myself, but the truth is, I still can't decide what to do with it. Eventually one day, rather suddenly, I'll go downstairs and resume weaving, and either I'll persist, or decide it won't do and cut it off. But I know what I'm weaving next; it'll be one of the two cotton projects. 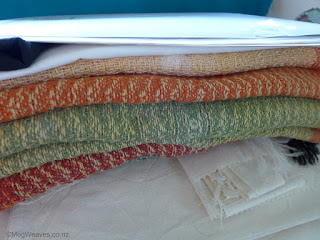 I finished the warp on Ashford with lukewarm results and the pieces have sat sitting on the couch. I'll tell you more about them after I've completed them. 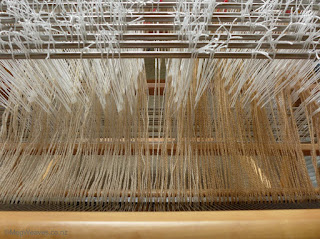 Last night I finished threading a short warp on the Ashford, 100% cashmere in, ahem, "nude" pantyhose colors. Mom and I are not brown or green people, so I don't know why she had so many browns, but a while ago I made two short warps and I put the milder one on. It'll be pretty when it's done, but so far the tasks has been excruciatingly boring. It's threaded in the usual on-a-whim undulating twill, and I can't decide whether to use another light brown or a pale gray in the weft. My notes says it's a 210cm warp, but I'll be lucky if I can get a 150cm piece. 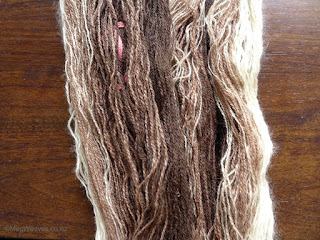 This is the other warp and it includes Mom's handspun cashmere. The tension is going to be all over and it will be another spontaneous undulating twill, but I wonder if I can do something interesting with the weft. 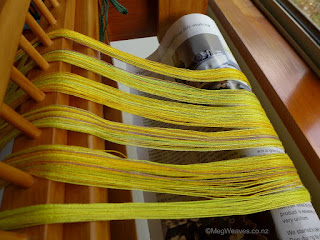 I enjoyed weaving the S&W piece, but I had no way of knowing how much I would come to love the result, which sat on the stairway to be viewed from different angles since I finished it. I put on another warp, this one mainly yellow, (a little less saturated than the pic in real life,) after our January trip to Wellington. First I was going for 10 inches wide on the loom, but I got tired and had done enough for 6, and it was time to get dinner started, so I stopped there. On the loom, though, it looks sad-narrow, so next time I shall make it at least 8. This, too, will be threaded and woven as I please: the warp is 4m and a bit so two 150cm+ pieces?? I think at the moment this style of S&W is my favorite way of weaving. 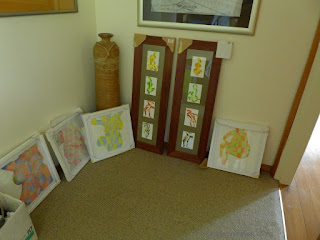 I had to tidy the stash room this week. I'm still concentrating on finishing gazillion projects and reducing stash, rather than reorganizing comprehensively at this stage, but it was becoming too crazy/unsafe, so I moved things around and vacuumed dead bugs. I also pulled out these I did in 2014 because I've wanted to put them up. I'm quite fond of these, I find them joyous, plus I used cheap, student watercolor paint, so they are going to fade badly, so they might as well fade after being enjoyed by me, yes?
Arthritis comes and goes. It's less predictable than I imagined, and one thing I learned is this is not going to come back once in a great while, but rather often when I least expect it. I should go see a doctor and learn more about it at some point, but turmeric is doing its job for now; even I don't smell or taste it it my stiff drinks any more.
I have weeded a couple of times, but not often, mainly because it's been often hot/sunny or windy and completely dry.  I pull out something and dirt crumble down our slopes like sand, as is usual this time of the year. As the light turns gentler and days start to cool down, though, I've been keen to get out again. We finally had some rain this week and can expect more next week, so here's hoping. 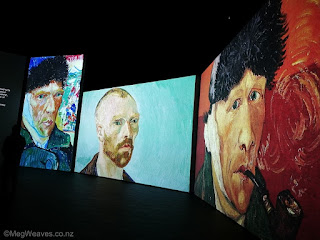 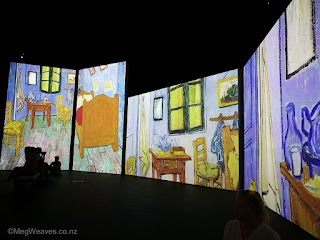 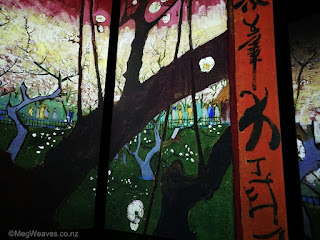 Ah, our January trip to Wellington. It just happened. Esther said some time ago, out of the blue, we should go to Christchurch to see the van Gogh projection show. I was thrilled because I thought we missed the chance while it was in Wellington during one of the milder levels of lockdown, and I didn't expect it to return/resume. We had early Feb in Christchurch in mind, until suddenly Esther said we should go to Wellington because the city is more interesting, and suddenly in late January we were there! We have our usual accommodation, which happened to be on the same street as hers, but when we looked for an AirBnB with two rooms and found a spectacular one. Van Gogh was good, not scholarly or meaningful, more amusement park entertainment, but still we did see huge brushstrokes and even few paintings I don't think I'd seen before. Used bookshops were fun, and Te Papa, our national art gallery, had revamped how they show their permanent collection and we reveled in it for the first time in many years.
But the best part was food; Esther and we are serious about good food; she is a superb cook. We chose good places, had no bad meals the entire trip; she took us to her usual tea leaf place, where Ben got superb woolong tea leaves; and we took her to our regular stop, a wholesale/retail supermarket. It was a splendid trip.
Posted by Meg at 2/27/2021 11:35:00 PM