I had a weaverly week, in that weaving is all I did.
"Sunflower" is progressing in spite of a few problematic warp ends on the right breaking. On a good day, I can weave 20cm. My south-facing stash room hasn't got the best light except for a short while in the morning, but I persevere. I'm just thrilled I can weave on two looms anytime in this wee space as long as I don't trip over the non-weaving stuff piled up in the middle of the floor, which I do. 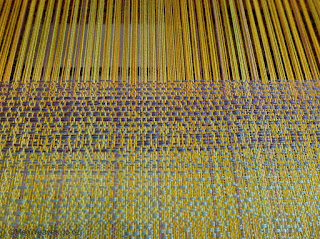 Last week I wondered what would happen if I wove two shots of pattern wefts between each tabby, and then Deborah Silver mentioned that's what she thought years ago, which apparently started her path to studying split shed. My first thought: this increases the color possibilities exponentially. 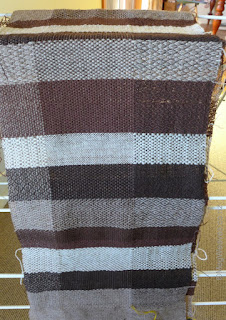 Ah, "Chocolates" warp:
1) Mom's handspun 2-ply "white" was too sticky I took it out from the left side of the warp;
2) Although my notes said these two brown warps were 210cm on the warping board, which were supposed to allow 150cm pieces, they were in fact shorter after resting for a year or two. I wove only 144cm on "Milky Tea", 142cm on this;
3) Although all 100% cashmere from the same source, there were two or three different sizes in the warp, and different colors stretch at different rates;
4) Likewise I mixed all sorts in the weft, so it's a wild ride - who knows how it will wet-finish;
5) The warp was wider than I pictured so I wove weft-wise rectangles;
6) Although some look indistinguishable even in daylight, I inadvertently wove one section using two similar but different browns. Between the two warps I counted 12 different yarns;
7) I don't enjoy browns, so I'm cranky;
8) "Chocolates" in particular is not to my taste, but I see these colors in fabrics. Perhaps I'll make it into a cowl and give to charity;
9) I have to be more innovative in sash-busting Mom's yarns so I enjoy the weaving rather than just weaving quick projects. I know I have enough browns to for two more short pieces, but I'd better mix other hues. 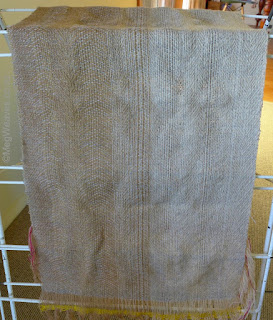 The Ashford table loom is ever so suited for cashmere warps, though. I feel I'm learning to control and vary the tension and the beat better than on any other loom. But now that the two short browns are finished, I must make up my mind about the teal warp downstairs. I'll keep weaving on it in the immediate future because Ben likes it. 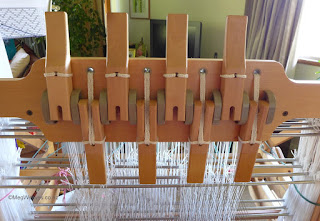 Interesting observation on the way my brain seems to work. Ashford's levers are linear, so it's easy to see the progression of simple lifting order. For e.g. the 3:3:1:1 twill I used in "Milky Tea", I only had to move the whole pattern one position to the right at a time. "Chocolates" was two blocks of 4-shafts, so likewise I could see the tiny patterns moving within the four shafts as if it's on paper.

The ex-Polytechnic loom is a little different. I mentioned before, my brain sees the lever layout as geometric, and other than the tie-down scheme, I draw shapes while lifting. For example, tie-down shaft plus 4-6, then 6-8, then 8-7, 7-5, 5-3, and finally 3-4.
I'm right handed, although Mom could never remember I was a leftie to start with; (never mind I'm the eldest and her only kid for 6.5 years;) she and my brother were and were "corrected"; my sister wasn't. The most interesting part is, while weaving on this loom, my left hand moves automatically and knows faster where to go, so lifting odd-numbered shafts is automatic, while the right hand and even-numbered shafts, I have to think about it. Isn't it intriguing? I'm keeping an eye on this phenomena.
* * * * *
A year ago today we went into Level 4 lockdown. One year on, it feels both such a long time ago, and the virus is still ever present, just far away from us. Meanwhile, parts of Japan is in the middle of the cherry blossom season, although I understand, sans cherry-viewing parties outdoors.
Posted by Meg at 3/26/2021 10:10:00 PM