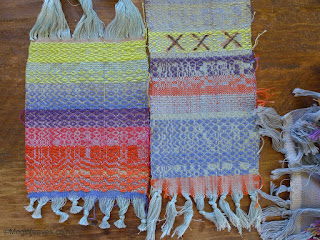 At Insomnia O'clock a week ago, I thought to revisit background patterns for Sunflower. So I sampled on the last of the semi-permanent sampling blue cotton warp on Klik. 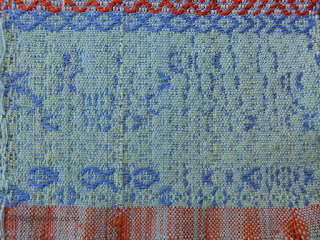 I was particularly enamored by the "faded wallpaper" look in parts of the B-side, but this sample on the right was woven at 40EPI and is too stiff for a scarf. (Though definitely cuttable and sewable.) I wove the sample on the left above at 35EPI, and the B-side did not full as much, but the hand is suitable as scarves. This time I also prefer the look 20/2 both as tabby and pattern wefts. The samples look so much more interesting than on the screen/software. 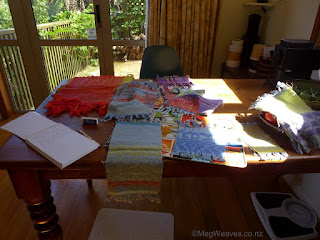 I dug up my samples and study them one by one. I'd forgotten quite a bit about tie down but this was an interesting exercise. 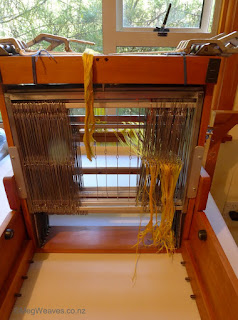 Having decided I'd include a three-end diamond rather than five- as in the blue samples, Sunflower went on the loom at 36EPI. Since it's long-ish, I shall sample some more to see if I can balance the look vs hand and resley if necessary.
By the time I finished threading tonight, it was quite dark, so I must check the threading tomorrow. 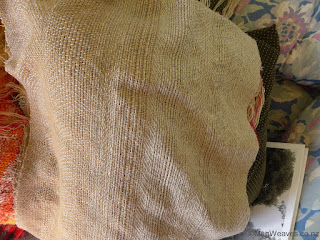 While enjoying thinking about Sunflower, I wove the paler of the two brown pieces. I had named this something like Mocha when I made the warp, but this one looks "Milky Tea". It's a make-it-up-as-I-thread 8-end undulated twill. 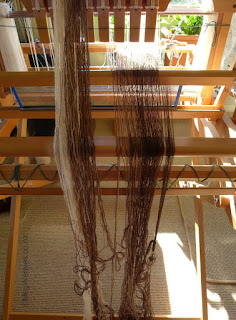 I merrily started threading the second warp in a similar twill, when I thought this looks not like "Caffe Latte" as originally named, but more like dark, milk, and white chocolates. Now I think a blockier, square/rectangular look would suit, so I suspended threading until I make up my mind.
Today was the tenth anniversary of Japan's big quake/tsunami. February 22 was Christchurch's. My sister reminded me leading up to these two quakes, the Pacific Rim was rumbling. And again, Japan, New Zealand and the Pacific have been shaking of late, although so far without major damages. It's probably time to review our emergency packs, again.
... Yikes.
Posted by Meg at 3/11/2021 09:55:00 PM