On Monday and Tuesday, I tried my hardest to relearn manipulating backgrounds in tied weaves to no avail. My mind glazed over and I felt sleepy. (I'm also having a bad insomnia month.) On Wednesday I decided to rethreaded/resleyed Sunflower in simple 1-2-1-2 and just weave it 1-2-2-1. On Thursday I started weaving. 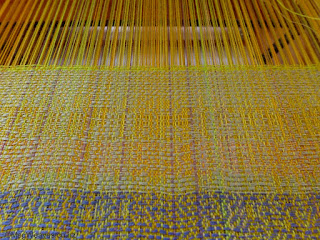 I sleyed at 36EPI and am using 60/2 to tie down, so it will have the texture and look similar to the previous piece, good for scarves but none of the "wallpaper" look. I even have the same tension problem at the edge like last time - this time on the right side. I don't know if it's a problem specific to this loom or me, as this 20/2 cotton has very few problems on the Klik or the big loom downstairs, and I usually weave somewhere between 36 and 42EPI so this is not denser. I'm getting a lot of feathering on warp threads and many broken ends. And I've readjusted the tension until the cows came home but I admit I was impatient to start weaving and may have not addressed the issue well enough. Or there was a mix up at the cross when I made the warp. Yikes. I also have enough to get two short pieces from this warp, and might change up something after the first.
While reading about tied weaves, I found so little on Quigley and Bergman, I couldn't figure out where I got these names in the first place. Whenever I read about tied weaves, in the past I always imagined the next weave I'd investigate is double weave where some of the warps change layers. Stitching, is it? This time, Stickler's 8-shaft mentioned Batetman's Boulevard. Back in the 90s I bought a few weaving books I imagined I would need some day, and among them are the Bateman/Harvey monographs. Who isn't attracted by weavers discussing "Boulevard" and "Park" weaves, right?  Over the years I'd pick one up to learn something, but the language was an obstacle, again. In the monographs there are no modern-style drafts, either. And Bateman cloth appeared dense and tight, so in my mind they suited clothing and upholstery fabric more than scarves, so back they went on the bookshelf.
Yesterday, though, I gave another go, and I understood the start of Park Weave relatively easily. I'll try Boulevard tonight to make sure I've got it. Then I think I'll dig right in and see what Dr. Bateman wanted me to know. I'm hoping, with 20/2 and 60/2 cottons, some of his weaves might make showy large scarves with OK drape. If you are interested in Bateman Weaves, there are three modern books that, I understand, explain better with modern drafts.
And then suddenly, I knew what I used to know about tied weave background, too. Like that! I could see in my mind's eye some options I have on eight shafts. And finally, I searched this blog for Quigley, (I don't always trust myself and prefer to get information from elsewhere, but I knew I wrote about it,) and found an old post.
I'm a happy weaver now; I'd be happier if I can figure out the feathering warp problem, though.
Posted by Meg at 3/19/2021 11:37:00 PM