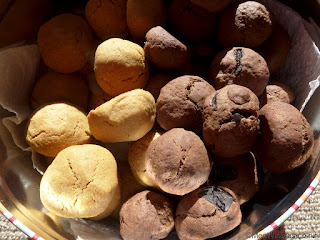 Very early in the lockdown last year, in response to media questions about the strictness of our lockdown rules, Jacinda said, "I have a duty of care..." and I couldn't take in what followed. It was the first time in my life I heard a politician say those words. Ethical, moral, but also so very normal. I don't understand all the flack New Zealand is getting from foreign press.

Make no mistake, New Zealand is not a hippie Nirvana. We have anti-(insert-agenda) folks and lockdown dodgers, and associated warnings and arrests. We also have opposition parties. Last year someone sued the government for putting the country in lockdown, which is probably why Jacinda has to mention legal advice around changing/enforcing rules from time to time.

Meanwhile, the first lot of folks from Afghanistan arrived a few days ago, with assistance from Australia and, I think, UAE. Apologies if I got that wrong. I don't know how many are Kiwis vs. Afghans. But can you imagine being pulled out of Kabul as it crumbles; sit in a cargo hold of a large plane, (my conjecture;) having a stick shoved up your nose, (even if you are fully aware what it is for;) being placed what I imagine is a generic border quarantine facility; probably not being able to speak anyone outside of your immediate family; being served possibly unfamiliar food by possibly invisible persons; all in the middle of a quiet Level 4 lockdown New Zealand; where depending on where they are, may reach a high of 20C as opposed to 32C you might have had before you left? I wouldn't be surprised if littlies are even more terrified now than before leaving. I don't have skills, but if there is an opportunity, I would gladly hold a squirming, screaming kid just long enough for Mommy to wash her hair. Or go to the bathroom. I bring built-in cushion.

Today, my thoughts have been with them. 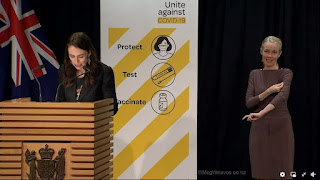 Day 9, August 26, community cases: 68 new, 277 total. I've been loosing the plot. I still watch the 1PM update live, follow half a dozen folks online, but I can't take in the numbers nor new information. Instead,I've been absentmindedly staring at sign language interpreters, in particular, the different ways they sign "vaccine". Also, they stand in front of the black background, and many wear black. There is one woman in particular who wears matte black top, jacket, and a long black skirt, and when she is on, I can only see her face and her hands moving as if each has its own mind. It's utterly mesmerizing.
Otherwise, I've been quite brain-dead. (What a sentence!) Other than laundry, ironing and too much cooking, I haven't done much. Must. Do. Better. Day 10, August 27. 70 new cases, all in Auckland; 347 community cases in all; 333 in AKL, 14 in WLG. All regions south of Auckland will move to Level 3, (commonly known as "Level 4 with Takeaways",) from Wednesday, September 1. Auckland and Northland's levels will be reassessed on Monday, August 30, but Auckland is likely to remain in Level 4 for a fortnight.
This micromanaging, so different from last year, is causing a something of a wee havoc, if you can call something that. Where does "south of Auckland" start? (Apparently roadblocks were set up in different places last year.) Is Port Waikato in Auckland? (No idea.) Why is Northland with 0 cases in Level 4, but Welly with  14 in Level 3? This is the one I kept shouting at the telly. (Apparently something to do with all Welly cases being within a household; a north of Auckland case being in a workplace and on a major road; and a bunch of Aucklanders escaped to their holiday homes up north before and after lockdown started?)
And then the wastewater in South Island: Covid found in Christchurch is "probably" from the quarantine facility. In stark contrast to Jacinda relentlessly reminding us how transmissible Delta is. (Not about sewage, but there was transmission in managed isolation through open hotel doors.) And why does she ceaselessly talk over Top Doc, as if she's stopping him from going off script??
So, I'm grumpy tonight. Things are not straight forward this year. And my favorite NZ Doc Michael Baker says some data openly disclosed elsewhere is not coming through here. Got you a pic of finished purple crocus with just emerged yellow ones. I don't think I'll mix colors next year. Also, Zoom party with even-tempered, lovely vegetarians in half an hour, thank goodness, so I have to... go... and be a better person.

I am aware there are real problems in the world, like folks who have to work while their little ones are home during lockdown. Or Afghanistan. I'm just being a big baby. 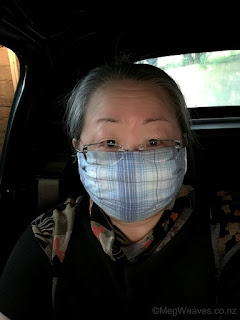 Day 11, August 28. 82 new community cases; 429 in all, Auckland 415, Wellington 14.
We made our first lockdown trip to the supermarket this afternoon. We left home around 5PM; it'd been a sunny, warm spring day after heavy overnight rain, and a brilliant afternoon. There was more than the normal Saturday afternoon traffic on Tahunanui Drive, plus more runners and cyclists than I've ever seen in my life. More than 90% did not have masks; of the rest, about half were only carrying them, leaving only 4-5% wearing them. But also, there were a few groups obviously made up of multiple bubbles, but overall, folks seemed to stick with their own.
During lockdowns, we go to the bigger Countdown supermarket, because there is less chance of a queue to get in, (none when we arrived, one waiting when we left;) inside is roomy; and they let two people from the same bubble shop together. Just as the media reported, there were no broccoli, New Zealand's newly-crowned star veg this lockdown. There were no bananas when we arrived, either, but I spotted a staff carrying two bunches, and Ben followed her to grab one. Meat section was very sparse, but not empty, and we managed to buy a variety of shiny, attractive protein, enough for the next almost fortnight. 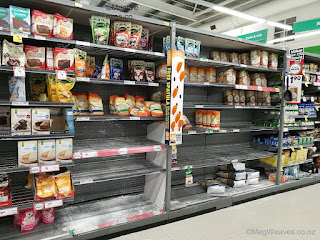 There were plenty of eggs; plenty of loo paper if you aren't fussy about the brand; I forgot to check yeast, but I did catch a quick shot of the flours. There were plenty of supermarket bakery's bread and baked treats left on the shelves.
Ben said everybody inside, shoppers and staff, had masks on. (I was too busy trying to buy everything on our list I didn't even look.) Though we didn't engage in the usual, lengthy picking up of unfamiliar products, reading of labels, and comparing nutritional contents, the atmosphere was much closer to normal compared to last year. Although... some shoppers and staff weren't too concerned with distancing. Hummm... 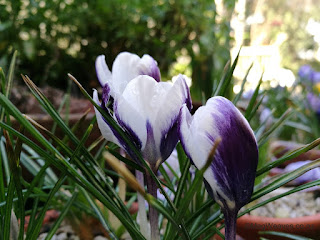 The weather has been changeable, but winter is most definitely coming to a close. 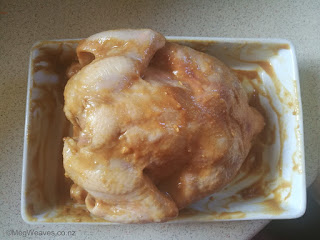 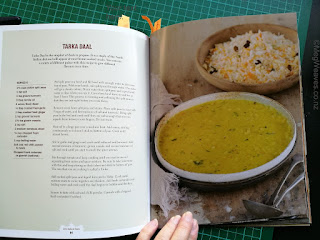 We've been eating more beans the last few years because they are easier on the old bod, we buy dry so easy to store especially during lockdowns, and we hang out with a lot of Vegetarians so it's good to familiarize ourselves with recipes sans meat. The other night during zoom, I mentioned lentils are one kind I've never found nice, to which one such vegetarian asked if I've ever had a good daal. I said I didn't recall, and I don't, but it's possible I never tried it because it has... lentils... Another wise vegetarian told me perhaps the reason I find "vegetarian" difficult is because I'm not used to thinking of veg as main dishes. No truer words! 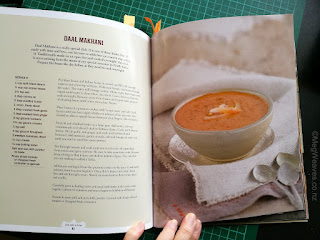 When I asked Ben this morning if he wanted the chicken marinated in miso or Tandoori Masala, (I secretly wanted him to pick the latter, or for him to tell me to choose as he normally does,) forgetting whenever miso is in the mix, it's his default choice. So this week I shall try one of these. At Chez B&M, we can't call this a real lockdown without Indian food, and Chooza Tikka is no longer considered Indian because I make it so often. 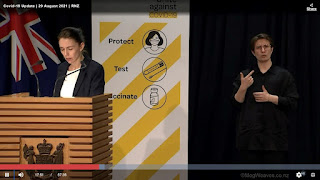 I count it a good day when I forget about a 1PM update. It just popped up on my screen halfway in. I noticed today's sign language interpreter had her left wrist taped up, although it didn't appear to hamper her work. Signing must be dangerous work.
I didn't garden like I planed to, I didn't weave like I'd hoped to, but I was a happy chappy tampering with some protein in the kitchen most of the day. And I washed an experimental weaving sample tonight. 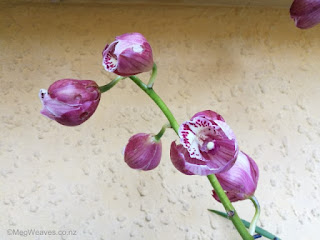 Day 13, August 30. 53 new cases, all in Auckland. Community nationwide 562; A 547, W 15. We in south of Auckland will go to Level 3 starting Wednesday; Auckland in 4 for another fortnight; Northland provisionally 3 from Friday.
Tomorrow is officially the last day of winter, and this morning I realized I may not have the tail end of a cold, but perhaps Day 10-ish of hay fever. We had strong wind most of the day, which didn't make things easier, and I stayed inside. 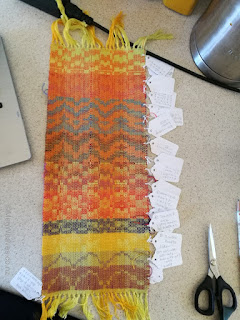 First thing I did today was some work. I had not scrutinized or labeled samples like this in close to two decades. It was time-consuming but enjoyable. Hee hee. Then I cooked a whole lot, again, and washed a whole lot more. 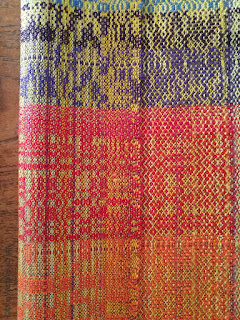 Day 14, August 31. 49 new community cases, all in Auckland; total 612. New case numbers decreased two days in a row, and for that the nation is cautiously ecstatic, but get this, 2/3 of the cases are under 30 and there are six kids under one year old. One. Year. Old!!
Tomorrow, we go into Level 3, which is Level 4 with takeaways. Also tomorrow spring starts unapologetically, although we've already had several beautiful, balmy days, sandwiched between occasional reminder of winter. People are happy. But this worry-er is worried. If 95% of Nelson on Tahuna Drive on Saturday afternoon under Level 4 couldn't be bothered wearing masks, if ,already, this time around solid law-abiding folks were bending the rules here and there, (they were,) Jacinda might be herding cats in a week or so. Let's hope I'm very wrong, but for now we're mostly staying in.
As well, Auckland, who has to stay in Level 4 for a fortnight, got hit by very heavy rain this morning, some suburbs having to evacuate, etc. So spare a thought for them?

If I were to order a perfect day to entice me to get outside, today would have been once such. Relatively still, cold but sunny and generally quiet. (For Level 4, there has been a surprising lot of noise, especially traffic.) But from the moment I woke up, my head was full of weaving. I felt slightly guilty, but I convinced myself, (not difficult,) my reason for being here on this planet is to weave, not weed.
Gotta love unironic hyperbole. Sometimes it's nice to be a second generation drama queen; I take after my dad.
Posted by Meg at 8/31/2021 06:52:00 PM