Sunflower (Possibly I of Many)

I wove the first sample piece on this warp, (I gave this to Jade who is furnishing a dollhouse during the long New South Wales lockdown, so this is the only pic I have,) between March 19 and April 21, in early to mid-autumn. Sunflower (I), I started on April 22. I had two fortnight-long breaks in May and June when I couldn't weave while the stash room housed the content of our linen closet. I finished weaving it on July 15 in the dead of winter. Since the stash room is south-facing, and has a kowhai bush just outside the window, it gets very little sun, and that's reflected in the weft colors I chose.
The warp colors were somewhat based on van Gogh's sunflower paintings, but within what I already had. Threading was completely random 1-p-2-p. In parts I used two pattern wefts in different sheds, but I kept no record. (Ergo the next somewhat-sunflower-esque warp.) Tie down is 1-2-2-1, so with one pattern weft, diamond shape appears, but where I used two pattern wefts, they look more like honeycombs. (There are many lifting mistakes, skips, and "brushed" warp due to bad tension; please ignore them. Also, these photos were taken on three occasions, so they are all over, but I hope you get the... ahem... picture.)

I started weaving at the bottom; It doesn't appear so because the bottom hallway is dark, but the value is so much lighter at the start, varied for the rest. This is the top side, the side I saw as I wove.

This side appeared underneath. Ditto re. the value. (Like the wavy, dancing piece? We had the window open downstairs.)

I started with subtler combinations, as in the sample above, and mixed hues happily, but by June it became harder to see, so the colors became brighter, more saturated, weft pair combinations "sympathetic," (my expression; meaning, close in hue,) and color progression in almost cyclical gradation.
As you know, typical Summer & Winter shows shapes: one side with shapes in pattern weft color/s and "background" in warp color/s, while the reverse with shapes in warp color/s and the "background" in pattern weft color/s. I originally became interested in Summer & Winter to make the most of the number of shafts, and I thread the pattern shafts randomly, so I don't have clearly defined shapes. Still, the contrast in top and reverse sides is striking. Or, in a way, as you'd expect. 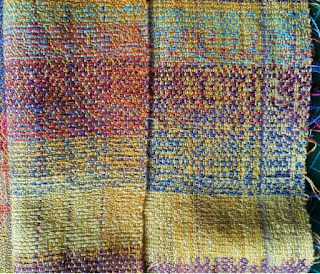 Contrast in pattern weft hues. From a distance it looks Impressionistic. Right is top, left is reverse. 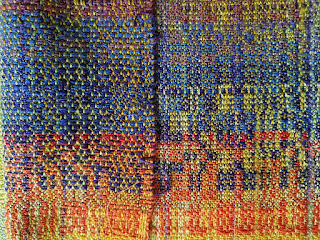 My favorite. Orange at the very bottom has one pattern weft, the rest with two pattern wefts. Right is top, left is reverse. 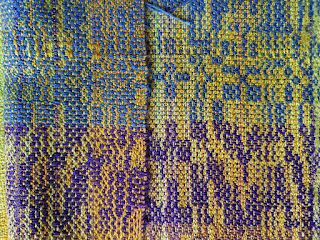 Accidental shapes/lines do appear. Right is top, left is reverse. 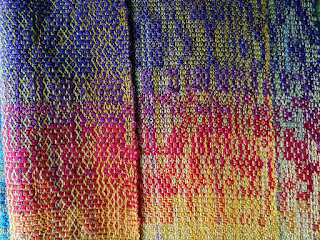 Sympathetic pattern weft pairs; color changes gradated. Also, do you see the honeycombs on the right? Right is top, left is reverse. 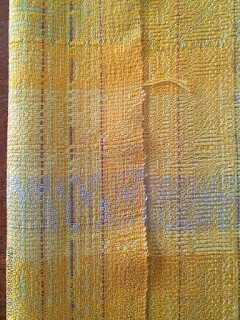 Extremely sympathetic colors all around. Boring, but would work for subtle pieces. Right is top, left is reverse.
As I neared the finish line, I became curious about the relationship between lifting and how two pattern shafts appear, so that's what I'm working on now, with records! Posts will follow.
Posted by Meg at 9/01/2021 02:08:00 PM