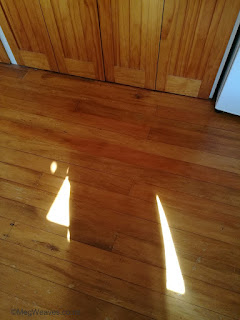 Day 14+7+1, September 8. 15 new, all Auckland; current outbreak 855, active 636. And the start of Level 2 outside Auckland. I used to loathe 2 because the rules were hard to understand. But last night I had an aha! moment; under 4 I'm not allowed leave home except for food, medicine/doctor/COVID testing/jabs, or exercise near home, (vaguely defined.) Under 3, I'm allowed a few "non-contact" consumption additionally. Under Level Delta 2, I am more or less allowed to do anything but follow stringent rules, i.e. masks, newly mandatory scanning/record keeping, distancing,  and group size limits.
Level 2 morning. Early traffic noise was no more than the last three weeks, but more industrial noise. Someone on my street had the radio on really loud, maybe fixing house or car or tree? Too early, so loud, and shouty songs. I shut the windows, and... it was Ben! Closing the windows made the music louder!!
Also today a few systems got hacked again; the tax department, banks, and our weather service, while some parts of the country continue to have wild weather, especially Auckland. Also, there might have been a person carrying a gun showing up at Christchurch Hospital.
I've been a bad daughter. I talked to Mom on May 10. Then I tried on July 15, but I had a problem and we couldn't connect. (I'd been attending quite a few weaving-, art- and Shakespeare-related Zoom thingies I had shut down my microphone at multiple places. Ben asked me why I didn't use my phone. Wha???) Before May Mom and I spoke weekly, but I'd been having difficulties coping with Mom's mind deteriorating, which isn't evident because she puts on a great act. Some of what she said so astonished me, every week I text my sister in panic, and though I can't see her, her eyeballs strode to the back of her head, a sigh that can easily blow away a straw pig house leaked out of her, before she would text back, "not true." Anyway, I talked to Mom today, and she had one bombshell, and a couple of surprises. The problem is, they are all plausible. I might bring them up with my sister if the opportunity cropped up.
Super windy today; I reorganized my herbs, spices, and condiments and made a shrimp curry. 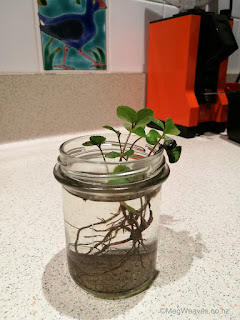 Day 14+7+2, September 9. 13 new, all Auckland; 868 in the cluster; 603 active, 265 recovered.
This afternoon, I finished weeding/cleaning the pots on the patio, and put almost all self-seeded hellebores into pots and water-proof coffee bean bags. I was disappointed last autumn how few self-seeded babies there were; only three good clusters, two dark pinks and one possible purple, (found between a purple and dark pink,) and no slate. Slates don't produce a lot of seeds and self-seeders seldom survive, but still I live in hope and most years pollinate and cover a few flowers with muslin bags.
I planted the two smaller clusters into a new patch under the cherry tree in the autumn, and though tiny, they seem to be doing well. I'll be thrilled if they flower next year, but it's likely I'll have to wait until the year after. The last dark pink had a large cluster. I'd already used a dozen to fill in the gaps in two patches. I want to keep the rest in tiny pots until next fall so I can start another patch or use them to fill in gaps. I had a dozen pots, but separating the tiny plants, I kept running out of pots and soil, and in the end I had perhaps four dozen. And I still ran out of containers but it was too dark to keep working, so these four will be taken care of tomorrow.
I've been growing hellebores for well over 20 years and I'm quite pleased when I get a dozen self-seeding plants from an older one, occasionally two dozen, but I don't think I've ever had nearly five dozens from one. Now if only I could get more flowers per plant as many folks do... 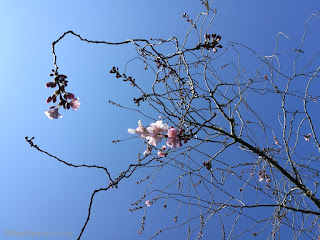 Day 14+7+3, September 10. 11 new, all Auckland; 879 in the cluster; 591 active, 288 recovered. Overnight there was wild weather "around" us; 180km winds, trees and power lines blown down/away, resultant power outage and fires, and trucks toppling. And by around us, I mean, to our east, southeast, and southwest, all over the South Island, and possibly parts of the lower North Island. In Nelson, we had some rain. It's supposed to be wild until and including Monday.

Ben had the day off, which meant food shopping. And in case the weather turned wild, we went early, i.e. before noon. Under Level Delta 2, a staff counts the number of shoppers going in/coming out, make sure we scan or sign in, and have masks. Anything other than Level 1, we go to Countdown, where the queue, if any, are shorter and more than one from one bubble is allowed in. (Strictly speaking, I'm not sure if this is allowed under the wider New Zealand rules, but the store is big and aisles wider, I even asked during the previous lockdown, but we're perhaps blatantly breaking the rules.) There was one young chap, in his 20s??, not wearing a mask, and the first thought that came to my mind was, "Oh, the demographic with the greatest positive cases!"
At checkout, we had a chat with one Zen, a most low-keyed, pleasant chap, (and I think I read his name tag correctly without my staring too hard.) I asked if folks were really rude or mean to supermarket staff, because, I said, "without you people, we'll, ummm... die, you know?" Zen, a big guy, instead, said, "You'd be surprised. People are unhappy and easily angered." He told me more, but it was hard to hear though his mask when he dropped his voice. This was completely contrary to what I expected, all the more surprising because so many staff are young; why would anyone want to be nasty to "kids" who sell us food during such precarious times!!
We were home a little before 1PM. We put away the food while watching the update. In Level Delta 2, Ben wanted to do more or less normal shopping, and top up veg during the week, so there wasn't much. We listened to Deputy PM Robertson, who has a calm, even monotone, voice, and we were exhausted from the shopping trip, I was ready to lie down on the kitchen floor for a nap. We managed to stay upright until update finished, I think, and then had a real nap. In the evening, we binge-watched Battlestar Galactica. :-D We enjoyed it because there was so much less CG that's become the norm for science fiction. There are a few more hours of it left for the remainder of the weekend. 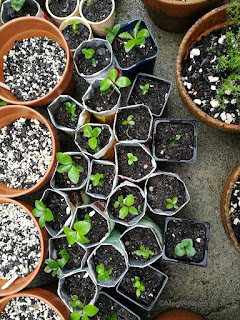 Day 14+7+4, September 11. 23 new, all Auckland; 902 in the cluster; 612 active, 289 recovered. (Radio New Zealand math.) Apparently Nelson missed out on a raucous thunderstorm overnight, but we did have strong wind in the morning. Then, sun and calm, so I went outside, and it was so tranquil I wondered what I should do after potting up the hellebores. Then came a slight breeze, then soft rain, and then sudden huge, noisy, bullet-shaped rain drops. I hurriedly tried to gather my things, and before I was done, sun again. The way things work around here, had I stayed, it would have rained again; had I come in, it would be beautiful. So, I came inside. I have options now; I might line them up against the fence in one area, or..... 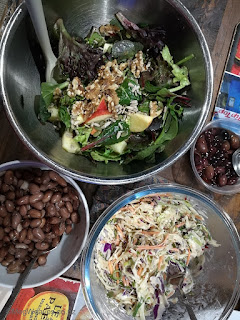 Day 14+7+5, September 12. 20 new, all Auckland; 922 in the cluster; 569* active, 352 recovered. (RNZ numbers except *Ministry.) I can't keep up with all the wild weather reports, and there have been so many; today we learned the existence of Orange and Red Warnings.
The most exciting thing toady was the plate on which I was building a salad was too small, Ben transferred it in a stainless bowl to mix, and neither of us could be bothered to move it to nicer plate/bowl. 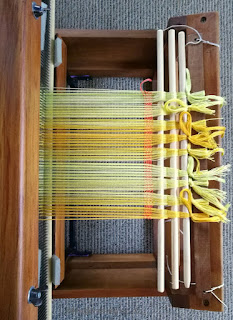 Day 14+7+6, September 13. 33 new, all Auckland; 955 in the cluster; 582 active, 372 recovered. I wasn't sure why active+recovered didn't match the total; it dawned on me the one may be the elderly person who passed away. Genetically mysterious cases remain problematic. An Auckland couple got caught using their "essential worker" status to drive from Auckland to Hamilton, hopped on a plane to a skiing holiday in Wanaka. They have their own place down there, and a father in high places, so name suppression, etc. Police are going to prosecute, or so the media say. Everybody else in Auckland remain in Level 4, the rest of the country in Level Delta 2, for another week.
All around the country wild weather continues, including possible snow further south, and ongoing drought up north. We had 15-20 minutes of thunderstorm in the morning; Ben was in town and saw lightening, but it must have been in the east/southeast because I heard a lot but saw nothing. The rest of the day was overcast and chilly, but nothing more.
I've been (re-/over-)thinking how I want to go on with this current experiment but saw no light, so I rethreaded anyway. Sometimes sitting on a project works wonders, but not this time. I'd do another sample or three, and if this threading doesn't work, I'll do it again. I don't like the tension, though, so I'm going to un/re-do the front. 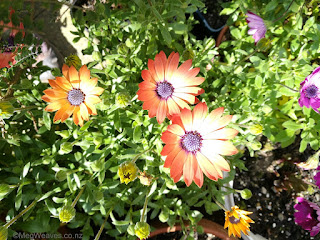 Day 14+7+7, September 14. 15 new, all Auckland; 970 in the cluster; 575 active, 394 recovered. I've been very tired for no good reason, so I cooked. It's interesting how cooking has become my go to place. Tonight we have miso-merinated chicken, kumura & mushrooms baked in chicken juice, and brownies. For warmer days, we have lime juice ice cubes to drop in glasses and dilute with water. Tonight will be a ginger wine & hot water night, though.
Posted by Meg at 9/14/2021 05:19:00 PM