I've been struggling to write this post because sampling is always more fun than translating it into words, and because I've been weeding a bit. Well, a lot. But it's too gusty today.
Sample 1 was posted here. Back then I was thinking of rethreading in an undulated twill and one night I made a draft to see if I was going where I thought I wanted to go.

Ewww, this was just twill biggified. I waited for a better idea for a fortnight, but I really wanted to keep sampling, so I rethreaded anyway in a pointy, undulated twill, but "skinnier" than the last time, i.e. not too many ends in the same pattern shaft consecutively, same as how I usually thread. 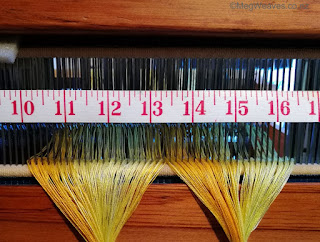 This warp has 278ish ends. I used Mom's Japanese reed which is approximately 7DPI, so this sample was woven 42EPI, but after wet-finishing, it's slightly more compact and stiffer than Sample 1.
It's another small sample, but here are the overall look. 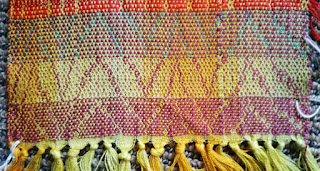 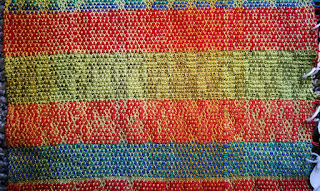 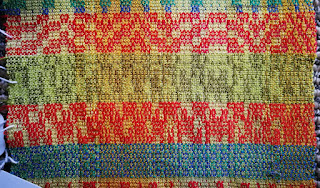 Reverse
Using two pattern wefts, I tried lifting shafts "geometrically" as per usual on this loom. These didn't show anything of interest on the top side as I wove, but was later surprised to see some shapes on the reverse side. 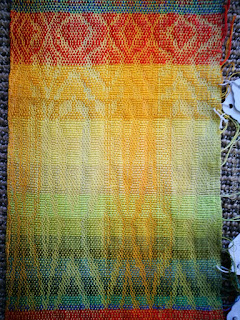 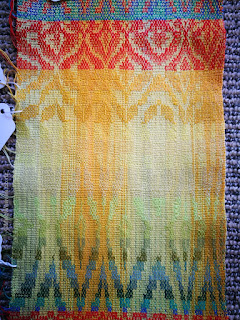 Reverse
Remembering I threaded in undulating twill, I lifted accordingly. I lifted two repeats with the same pattern shafts; then longer; then shorter, i.e. changing pattern shafts within a repeat. At the same time I wanted to sample colors close to those in the warp, because I like subtle colors in scarves. These are hard to see in samples and in photos, however.
The undulating/numeric lifting on this loom is confusing; it should be easier on Ashford, for e.g. or foot looms where the handles/treadles are lined up in a row. At one time I contemplated weaving wide Summer & Winter pieces in this style on the big loom. And this sample turned out to be an unexpectedly valuable prelude. Once I learn the relationship between lifting and the resultant appearance, I could make up, oh, a dozen or three shortish files with different sequences and pick and choose as I weave.
On 16 shafts, I can have 14 pattern shafts if I'm happy to keep the tie down tabby simple. In that case I could have blocks within blocks, although I'm not sure what exactly I mean by it. I think I see in my mind's eye a way to manipulate how colors appear when using three pattern wefts, but to sample that, I'm going to the big loom. I am not lifting that on an eight-shaft table loom. 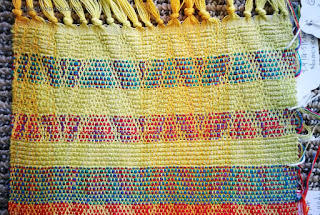 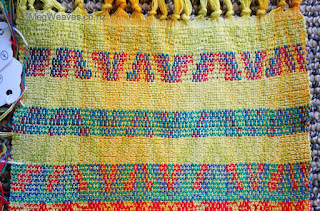 Reverse
As long as I was trying two pattern wefts, I had to try three. All three samples have the same colors in the same sequence, red-blue-green, but with different lifting. This turned out to be fascinating. In between are three different yellow-green pattern wefts used in the same way.
I have said many times before that I see weaving in terms how the warp threads appear, but after trying three pattern wefts, I'm finally coming to terms with weft-dominance a little bit.
I was not exactly thrilled with the overall look of this sample except the part with three pattern wefts, in that it didn't offer too much that was new, but I was pleased I wove this because of the possibilities on the big loom, and harmonious color combinations. I am also starting to see how I want to design narrow/small pieces vs. wider ones.
For a few days I was overwhelmed by my options, and I spent one morning image-searching Summer & Winter Weave. It would have helped if it had a unique name, but skipping a lot of images that didn't fit the bill, I came across two things: the first was folks weaving Summer & Winter on rigid heddle with two reeds. I can see how one reed acts as Shafts 1 and 2, but never having investigated the two reeds mechanism, it was mind-boggling. I have the Ashford extension kit somewhere...
The other was a picture of my own old wallpaper look I absolutely loved in March. I went back to read about it, and it made no sense, (and goodness me, how shabbily I write!) and I'm not sure if I can recreate it from there, but by golly I will. I do remember I wrote it's too stiff and not suitable for scarves, but bags, maybe? Vests?? So that's another option. (I wrote about the old wallpaper on March 11 and March 16, 2021.)
I always thought twill was my one true love, but now I see Summer & Winter as my preferred hill to die on. At least until I find the next shiny weave. Isn't this all so very exciting?
Posted by Meg at 9/30/2021 09:53:00 PM