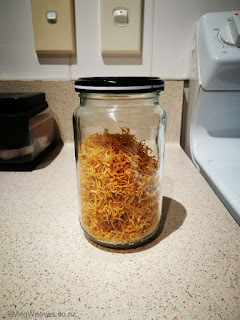 Day 14+7+29, October 6. It's not looking great on Auckland's first day of the slightly loosened Level 3, and I'm getting a little confused, learning new place names as well. 39 new, Auckland 30, Waikato 9; some of these folks live further south of the special section in Waikato; 1420 in the cluster; 334 active, 1085 recovered. Sadly there was the second death from this cluster. There was also a "weak positive" from an essential worker testing in Northland; I'm not sure if this person is included in today's number, but we can only hope Delta hasn't jumped that far north.
Gang members have a few positive cases among them, and are largely unvaccinated. Ben tells me a Gang Boss who lives outside Auckland was hired by the government/ministry and was given essential worker status to go into Auckland and tell his lot to get jabbed.
I peeled and juiced 41 limes. While peeling, the oil in the skin flew all over and I was sneezing like it's a terrible hayfever day. The peel went into the oven for low-temp fan grill because we had rain all day. I was going to make lime, vanilla and ginger cookies, too, but it'll have to wait until tomorrow. The sneezing and juicing wore me out. And I still have to kneed bread tonight.
I was eager to start working on a new weaving project, but at this point it's mostly inside my head, or sorting out logistics, like asking exhibition organizers if it's OK to post about the project in process; like asking my source if certain colors are still available; figuring out the approximate size of the piece; and how a piece of softish fabric must be hung to obtain/maintain a certain shape in the air. I love inside days. 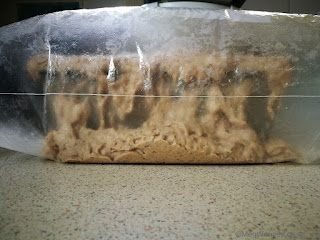 Day 14+7+30, October 7. 29 new, Auckland and Waikato; 1448 in the cluster; 362 active, 1085 recovered. I've been saying I'm copying Radio NZ numbers, but I realized just today I've been looking at the government's Unite Against CIVID-19 all the while. I watch the updates, most days live, but I'm loosing the plot. Hibiscus Coast, north of Auckland, might have had a case yesterday; apparently there is the highest concentration of old folks' care homes. Today there was a bit of talk about enhancing testing options. Also, the boundary of Waikato's Level 3 area is changing at midnight. Also, just now on the late news, the aforementioned weak-positive truckie tested positive in Northland. Also, doctors and modelling peeps in the press are cautioning Delta will spread and increase, and this summer is going to be different from other years. In other words, we are following New South Wales and Victoria's pattern. 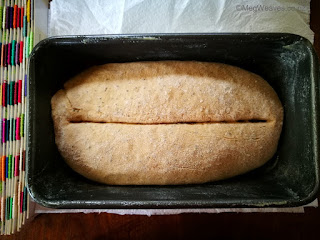 Today inadvertently turned into an all-day-kitchen day. I first had to repair an exploding bread; then I peeled and juiced 58 limes, which took an awfully long time. Some were tiny, about the size of a big grape, so I got roughly the same amount of juice of 41 yesterday, and less peel. After the bread came out of the oven, I didn't wait long enough, and the peel turned crisp and bitter, not suitable for our usual use like salads, baking, soup and bean dish decoration, but we liked the bitterness so I crushed the lot into very small pieces and we'll use it as bitter flavoring. 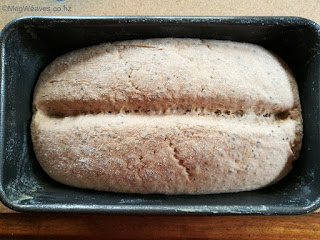 By then, it was well after 3PM; I had two things I was desperate to try on the loom, but I was too tired. Then Ben commented we don't have any junk food in the house, and I didn't want us to buy a lot when we go to the supermarket on the weekend, so I made cookies. I got out the usual recipe, I intended to put in extra almond meal but forgot; I couldn't wait for the oven to preheat properly so I stuck the cookies in anyway, but they turned out quite nice. They are properly-dried lime peel, vanilla and ginger cookies, but the most noticeable is the sweetness of almond, and a hint of salt. And then I was really tired, Ben had to cook dinner. 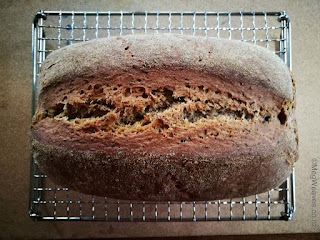 Tomorrow, some loom time. Also some weeding and more planting, if the sun comes out as promised. 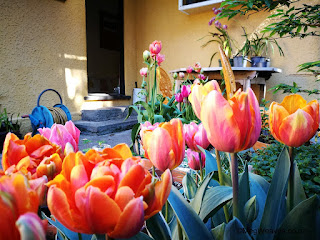 Day 14+7+31, October 8. 44 new; (Auckland 41, Waikato 3 from TV ONE); 1492 in the cluster; 406 active, 1085 recovered. Remember the "Auckland truckie" with a weak positive from a few days ago? Turned out it's a she, who obtained essential worker status under false pretense; the status was revoked about the time positive result came out and the phone number was invalid. This person, with another woman, had travelled around Northland for four days before getting tested. It took a while to track her down, while no locations-of-interest was announced. "Out of abundance of caution," the whole of Northland, (where vaccination rate is low,) is going back to Level 3 for four days. Some of us might have had a sense of something like this; Jainda has been promoting vaccination somewhere for a couple of days. Ben says there is a group of doctors spreading anti-vax vids somewhere up there.
Idiots.
I had a sick day; I'm paying the price of baking and eating too much wheat flour. But I feel black forest brownies coming my way soon. 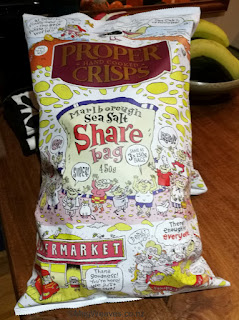 Day 14+7+32, October 9. 34 new in Auckland and Waikato; 1527 in the cluster; 402 active, 1123 recovered. Understandably there is great frustration in Northland about the two women who pranced around while at least one of them was Covid positive. The first woman has been uncooperative so the second woman hasn't been "found". The police has some CCTV footage of the two, and a few locations of interest have been identified. A former politician is amplifying a rumor he might have read on Facebook regarding their identify. What a mess.
Then there is a man who is in the process of moving out of Auckland into a rural property. He did everything right, getting permit, being tested regularly, scanning. He tested positive on his sixth surveillance test, but working on his case is going to be much easier.
This afternoon we went to the supermarkets; we got most of what we needed in the first but needed a few more and went to a second. With a bunch of junk food and a few non-junk in our trolley, I joked with the checkout lady we have veggies at home. She said everybody loads up on alcohol and chips on Saturdays; today her shift felt very long so she was going to do the same come home time. I didn't tell her we've already loaded up on the alcohol, but thanked her for working the long shift; she was too busy to talk to us by then, but she sounded slightly more chipper greeting the next customer. 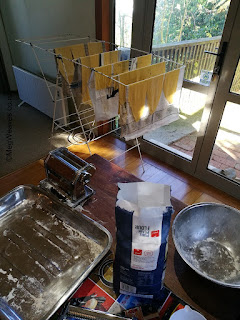 Day 14+7+33, October 10. 60 new, Auckland 56, Waikato 3, Bay of Plenty 1, (the last to do with the Auckland man moving); 1587 in the cluster; 438 active, 1164 recovered. I was talking to friends today that Delta is coming to the South Island and Nelson any day; we started to talk about the coming summer in terms of, "If we're still in Level 2."
Ben always said the secret to a successful weekend is to get up early. Ugh, I have a hard time getting up any time of the day, weekend or otherwise. By the time I crawled into the kitchen this morning, this is what the kitchen looked like. 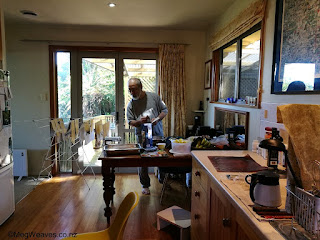 Over 20 years ago, he learned how to make tagliatelle from one Gino Rocco of Blenheim. (Remember his cafe across the street from... was it the post office?) Ben loves this, but you know, carbohydrate, so he hadn't done it in ages. He also makes mean udon noddles, too, but he can get a little fussy. 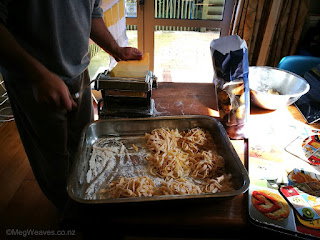 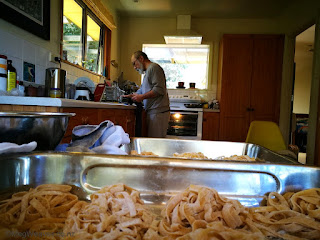 With pasta drying, he moved on to peeling capsicums.
Watching such an industrious husband from a comfy position, yours truly felt slightly guilty and set out  on the ambitious task of cleaning the house. With all the weeding we've been doing, there have been increased mud and plant material invading our living quarters. Days growing warmer, we walk around the house barefoot so we detect these foreign objects easily, and they've been accumulating to an uncomfortable level. "Why don't you vacuum more often?" I hear you ask. Well, that's one option. The other is to put on thick socks, until just the right moment arrives to tackle the problem. 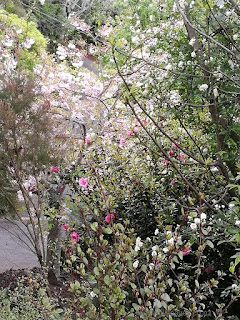 Day 14+7+34, October 11. 35 new, all Auckland; 1622 in the cluster; 452 active, 1170 recovered. Alert levels remain the same: Auckland in Level 3 with picnics; Northland and parts of Waikato, regular Level 3 until Thursday unless otherwise announced; the rest of the country, Level 2. Auckland schools will not reopen next week. Vaccination will be required for health and education sectors; details of who exactly they are to come soon. The rouge companion of the rouge Northland traveller was located tonight.
Today was another one of those "damned if you do, damned if you don't (change alert levels)" for the government. I think the whole country was upset with yesterday's 60, in three parts of the North Island. Some of us on the South Island have always wanted a travel ban between the islands, except essential workers, since there have been no cases on the South Island for a long time; tourist destinations are opposed; the government isn't interested. More realistically, though, these days we're all holding our breath, waiting/dreading to hear about a case on the South Island.
Today Ben was exhausted from all the cooking yesterday. I was going out to weed in the morning before either the rain or wind came, but with the pending update, (these days, it's 4PM Mondays after Cabinet meetings,) I felt so... in-between, so I marinated chicken two ways and just hung around the kitchen.
This is a view from Ben's office towards our driveway. I am getting really good at selectively showing you our place. My favorite hellebore patch, meanwhile, is knee high in convolvulus. I've got to finish the patch Ben and I have been working on, and move on. 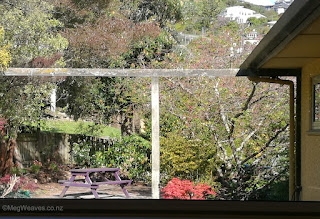 Day 14+7+35, October 12. 43 new, Auckland 40, Waikato 3; 1664 in the cluster; 476 active, 1186 recovered. The second rogue Northland traveller tested positive.
Right now, if you stand in front of my new oven and look out the window, you see the tips of the Elena rose with leaves that come out dark red which gradually turn bronze green to green; a small Japanese maple with leaves that start burning orange red that's already softening, and will turn yellow green in a few weeks; the big cherry tree whose petals are almost all gone but the young leaves are coming out; sasanqua with tiny leaves repeating the density of the maple; abundant lime tree that Ben recently trimmed; and the dark red camellia that we sometimes forget we have. And beyond, neighbor's lemon tree and palm fronds in a distance. In a few days the cherry leaves will obscure the lime and the camellia, but for just a few days, the layers and the depth is so complex and messy and magical, especially in the mornings.
I tried to capture it on three mornings on two devices unsuccessfully. The red of the camellia is brilliant and more visible in real life. This was taken this afternoon; I had to zoom hard and the mood is quite  different, but it's the best I can manage.
Posted by Meg at 10/12/2021 08:44:00 PM