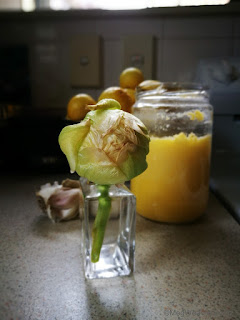 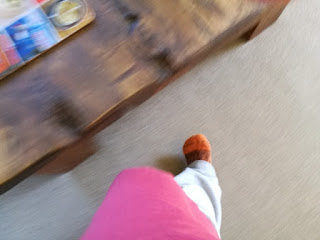 Day 14+7+37, October 14. 71 new, all Auckland; 1790 in the cluster; 599 active, 1191 recovered. Two Asian Auckland "sex workers" were found in Blenheim, 90 min from us on the South Island. They tested negative, thank goodness, but their names, ages, and CCTV/police footage were all over within hours of the news breaking. Judge denied name suppression. Northland absconders, one of whom obtained essential worker status illegally, well that's hush hush. WTF. 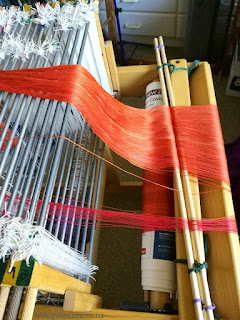 Day 14+7+38, October 15. 65 new, all Auckland; 1855 in the cluster; 664 active, 1189 recovered.
Instead of pruning dead branches like I planned, I threaded. Or tried to, I'm using some of my favorites, 20/2 and 60/2 cotton. But 2/60s are getting harder and harder to see, and unlike 20/2s I could never "feel" that size, so un-pairng from the 20/2s involves bending over and looking out from a different part of my glasses. And then further bending-over for threading both threads. Still, the combination do magical things to "colors", so, worth it. 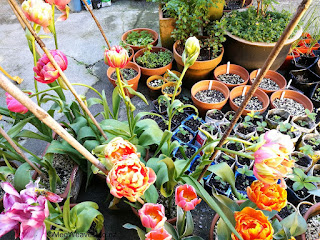 Day 14+7+39, October 16. 41 new, Auckland 40, Waikato 1; 1895 in the cluster; 640 active, 1247 recovered. Today was Super Shot Saturday Vaxathon, a somewhat hastily-announced vaccination day, in over 120 different locations around New Zealand. There was live television in the 1980s telethon style, (with sign interpreters in most locations, which was impressive,) different locations offering food, drinks, prizes; musos, dancing; politicians, celebrities, sports starts, medical professionals, and never forget, so many volunteers. The weather was fabulous in most places, it appears.
I said previously that we come from a certain time and a certain place, so we find vaccine hesitancy incomprehensible. But, you know, if folks like the festivity and can be swayed, or just as important, if rural folks can get it done easily, (there was a fly-through at a small rural airport for people with small planes,) why not. Jacinda was hoping for 100,000 shots today; around 6PM I think we cleared 125,000. I'll get the numbers tomorrow.
Ben pruned trees I had intended to all week; I kept digging up weeds, but also put in/moved a few plants. Ben cleared about a third of our long-decommissioned veg patch. We hastily stuck some seeds in, which may not have been the wisest way, but heck... And I discovered blackbirds decimated my cornflowers all along the driveway.
Rain tomorrow. 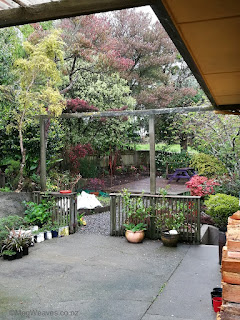 Day 14+7+40, October 17. 51 new, "in Auckland and Waikato"; 1945 in the cluster; 621 active, 1322 recovered. Yesterday 130,002 got jabbed: 39,025, firsts, 90,977, seconds. 65% over 12 is fully vaccinated, 85% half-ly; low-ish, but considering we've had vaccines for unspecial folks since mid-July, OK-ish. It's the rest of the folks, rural and/or with other practical impediments, or card-carrying antis, who are going to bard to reach.
The first thing I saw on the Internet this morning was this Guardian article. It's confirmed something I suspected awhile. A couple of weeks ago Level 3 with picnic, (and two or three more stages,) signalling we are no longer aiming for eradication, and the vaxathon, were rather suddenly thrust upon us. A group of usual-suspect "scientists" said they weren't consulted about the levels, and don't recommend complicating something we more or less got used to. The government said they were consulted; fine-tuning of the levels was meant to move Auckland to Level 2 incrementally; this is the new direction with a largely vaccinated population in mind. Rumor is we're going to ditch the Levels system and move onto traffic light system; so far I can't make sense of it. Hospital system is under pressure as is; border quarantine is making a lot of folks unhappy; there will be home quarantine, (yikes!) and travel, (YIKES!!). The linked article is worth your time; the interactive graphs alone are pretty neat.
Today's is another unedited but selective showing of our veg patch. At 3AM I woke up panting, imagining neighbourhood cats pooing and knew I must stick all the stakes we've got left. We had wind and rain today, but first thing tomorrow, definitely. 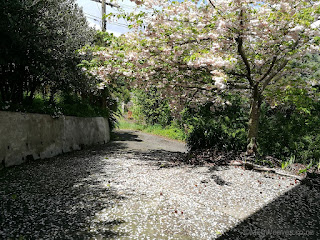 Day 14+7+41, October 18. 60 new, Auckland 57, Waikato 3; 2005 in the cluster; 633 active, 1370 recovered. Auckland will remain in Level 2 (with picnic); this status will be reviewed on November 1. Parts of Waikato remains in Level 2 (no frills, I think); status to be reviewed on Friday. Northland will enter Level 2 on Wednesday. The rest of us remain in Level 2. There will be an announcement on the new traffic light system on Friday.
この八重桜は変わっていて、小さい葉っぱが先に出てそのあとに花が咲きます。これも今秋で終わりかな。 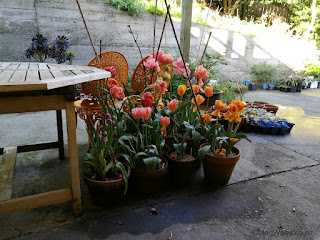 Day 14+7+42, October 19. 94 new, Auckland 87, Waikato 7; 2099 in the cluster; 713 active, 1384 recovered. The media started to report not only how many got jabbed, but how many remains unjabbed. The number of genomically unlinked cases are increasing, but I can't find today's number.
[EDIT: 183 unlinked cases.]
I weeded for four hours this afternoon, but for the time I spent, it was such a small area I was so disappointed. The wind picked up again, as did the temperature, and I'm afraid all the tulip petals will be blown away in the next few days if it keeps up.
Posted by Meg at 10/19/2021 09:01:00 PM