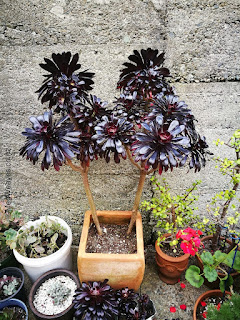 Day 14+7+71, November 17. 194 new in Auckland, Waikato, Northland, and Lakes District. And to be included in tomorrow's number, one in Christchurch; someone attended a tangi/funeral in Auckland and showed symptom after returning. Another person passed away in hospital in Auckland. 69% of population and 82% over 12 double-jabbed.
The whole country is moving to the traffic light system on or after November 29 together, but red or orange depends on the district's vax rate, and the system is not finalized yet. Vax pass became available today, but everybody tried to access the system and  not many seemed to have been successful. I couldn't even get to the Sing Up screen. Auckland will be "freed" on December 15; Aucklanders can conditionally travel out of the region and the rest of us can get in.
It must be summer. I was a little tired and unmotivated after finishing housework, but with just a little bit left to do on the patio, I went out at 4PM and finished the job. Among other things, I moved one of these guys into another pot of the same size/style. And... I can get back to wilderness of my choice tomorrow. Oh joy. 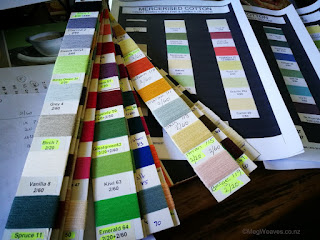 Day 14+7+72, November 18. 167 new in Auckland, Waikato, Northland, Bay of Plenty, Lakes, and Christchurch as mentioned yesterday; another in Christchurch who will be counted tomorrow is a household contact. We are now really "living with" Covid in Aotearoa, and over the summer it's expected to spread all around the country, but you knew that. Many cases have been found in wastewater first, so at least that's working. Two more deaths in hospitals. 69% of population and 82% over 12 double-jabbed.
Ben got to see his vaccination passport last night. We'll work on mine at a ridiculous hour on the weekend when it's easier to access the website, but I'm going to carry a printed version because I already know I'm going to fumble at some crucial moment.
A friend was asked at a job interview to list three words to describe her; I've always hated these gimmicky questions because I'm the kind of person who don't think before blurting out whatever comes to mind, and just like that, I thought to myself, "Short, fat, angry." So, my reaction time was excellent, but what a sad state of mind!
I've been angry/despondent/frustrated/going-out-of-my-mind about the weeds. Now, I'll be the last to tell you I'm a keen gardener, but over the years we tried, let's see, plastic weed mats, newspaper, cardboard, wool carpets, bought and homemade bark/tree mulching, organic solutions of every description, and cancer juice, but nothing has given us much reprieve, and it's gotten progressively worse as I get older and slower. I work carefully and diligently when I'm out there, digging to about 30cm to get the weed roots out, but the convovs have been thinking, too, and now their roots are even deeper. I'm an indoors person, and while I feel a sense of accomplishment at the end of a couple of hours, or five of work outside, it's the same sense of accomplishment I get from cleaning the house; I just don't want to spend every waking minute just to keep our place looking... normal... OK... acceptable... not horrible... just a little horrible... OK, horrible but cute.
So, yeah, today I'm weaving/sampling. I also ordered some yearns for the project proper for which I've been sampling. And I'm trying not to feel too bad about it... Yikes... 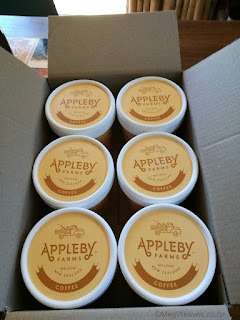 Day 14+7+73, November 19. 198 new in Auckland, Waikato, Northland, Bay of Plenty, Lakes, Wairarapa, Midcentral, (those are all over the North Island,) and Canterbury/Christchurch for which links are yet unknown. And a suspected case in Wellington. 69% of population and 82% over 12 double-jabbed. Many districts are nearing or have achieved 90% of qualified folks being double jabbed. Nelson Marlborough had a spectacular start, staying at the top of the list for a while, but slowed down this side of 70%-ish and is now at 81% of qualified folks. We need 677 arms to get the second jab to reach 90%.  (Not sure how current these numbers are.)
Yesterday we discovered a local ice cream maker could not export their product, (due to Auckland lockdown?) and announced a sale on their Facebook page. I thought their coffee ice cream is among our top three favorites, but looking at the umber of containers we are reusing all over the house, it must be our top choice. So my morning started with cleaning out our tiny freezer, throwing out a couple of things, downloading some others to the fridge, and thawing a few ingredients for dinner. And kneading sourdough.
During Ben's "lunch" break, we exited our Nelson/Tahunanui cocoon for the first time since the January Wellington trip, (or the second time after a lovely picnic by the river with friends?) Bravely we made our way to Stoke, which is actually closer to our house than the center of Nelson. The ladies at the factory shop greeted us, apologizing, "Sorry, we only have two flavors left, coffee and..." "Say no more," I interrupted, "We're here for coffee."
On our way home, Ben asked, "Since these are not the usual size but smaller tubs, does it mean we get one tub each?" Ahahahahaha. Dream on, Mate. They're 470ml tubs; label says there's 4.7 servings per tub; so, no!
I also got in touch with two of my favorite humans, both of who (whom??) had big things happen in their lives. I feel comforted sharing stories about aging parents with folks around my age. I treasure learning things from young people so I can live in this century. 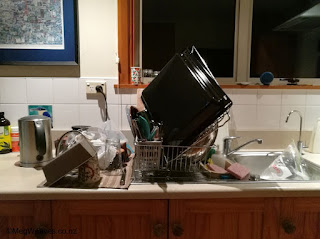 Day 14+7+74, November 20. 178 new; 0 South Island, but in Auckland, Waikato, Northland, Bay of Plenty, Lakes, and Wellington. 70% of population and 83% over 12 double-jabbed.
This morning I was so tired I half wondered if the moon changed earth's gravity last night. I couldn't stay standing long enough to wash the dishes, so I ended up doing not a whole heck of a lot. I didn't even nap. But I can forgive myself because I took care of a lot of little things around the house last week.
Later in the afternoon I wanted to check a few things related to weaving terminology and technique, which always lead to new possibilities and trying things in the software and making notes not directly related to immediate question.
I'll have to look for answers tomorrow, but the dishes have been washed. And the ribs I marinated yesterday were tasty. 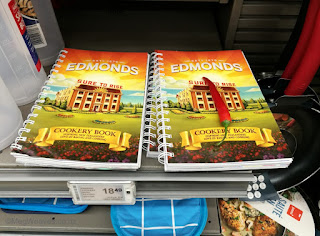 Day 14+7+75, November 21. 149 new in Auckland, Waikato, Bay of Plenty, Canterbury, again from travels to the North Island but no other detail; also one in Hawkes Bay to be included tomorrow. 70% of population and 83% over 12 double-jabbed.
I had been thinking for a couple of weeks hey fever is not bad this year, easing up early. Until, wham, came yesterday. Although it's raining today, it takes my system a whole day to respond to the weather so... A-chooooo!! Excuse me. With the cycle of rain followed by sun/wind, our place needed this rain, and cold use a couple of more days of it, but it's a one-day only deal this time.
We went to Mega hardware store for the first time in months; Ben went to drive-by pick-up on the last day of Level 3, so that's 9 weeks ago, but me, I can't remember. Regardless, it's a big gap because this time of year we're usually there every weekend late in the afternoon. But with elaborate routes marked inside the store, yet shoppers not keeping distance, we didn't feel relaxed and didn't linger. We also went to the supermarket afterwards, but I saw a teenager, and Ben saw a young couple, sans masks. They may have valid reasons, but then they may not. I started singing "Covid Nineteen's Coming to Town" inside my head and now I can't switch it off.
Edmonds provides us with anything baking-related, but more importantly their cookbook, (or cookery book) is the NZ standard. I don't cook from it because there are no pictures, :-D, but I can't count the times I read it when Kiwis mention a dish or a method unfamiliar to us. When we were new here, some confectionery shops and bakeries even told us "It's in the book," with details on their variations.
A staff or customer did a nice job of display yesterday; I prefer to think it was intentional. 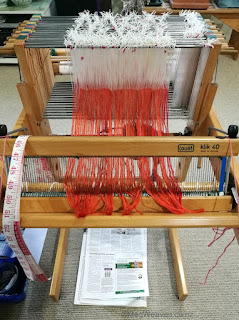 Day 14+7+76, November 22. 205 new in Auckland, Waikato, Northland, Lakes/Taupo, Midcentral, and Bay of Plenty; 0 South Island. One death in hospital; this brings total Covid-related death in Aotearoa NZ to 40. 70% of population and 83% over 12 double-jabbed. The country will switch to the traffic light system starting December 3, (i.e. everybody has to organize their vax passes by then,) but whether a region starts at red or orange depends on, I think, vax rate. Barbers and hair dressers can operate by traffic light rules a week earlier.
As of today we've been NZ permanent residents for 25 years. But because we are not citizens, (Japan does not allow dual citizenship,) we are on Japanese passports, (which is linked to our residency states,) and because I don't drive and do not have a driver's license, I will be carrying a paper vax passport. While I don't mind, I wonder why my NHI# isn't sufficient. Ben thinks District Health Board is in charge of NHI# while Vax passport is issued by the government, but vax process used NHI, from memory, and now the government needs a person to answer my 0800 call, check my records, and post me that piece of paper.
My current project has been... well, yikes. Experiments are not going the way I expect, options that makes no sense are turning out "pretty", there are just so darned many varied aesthetic/editorial decisions I didn't expect to have to make, and I can't find technical information in books. Usually this is the best part and once all is set and I'm actually waving, I've emotionally moved on to the next project, but this one, this one has been disorienting. And that's an unfamiliar place after all these years. 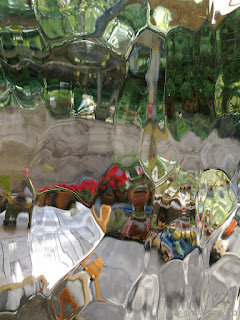 Day 14+7+77, November 23. 215 in Auckland, Waikato, Northland, Bay of Plenty, Lakes, and Midcentral; none on the South Island. A weak positive case appeared in Nelson yesterday, but repeat test was negative, so they suspect it was historical. This never made Radio NZ; there must be many more similar instances in other regions as well. One person passed away in hospital in Auckland. 70% of population and 84% over 12 double-jabbed.
I saw my pelagoniums through the patterned glass on our front door this morning. I didn't get much sleep last night and didn't want to weed, but I sowed a bunch of thyme seeds, and moved rose "sticks" into individual containers; I'm also going to see if capsicum and tomato seeds I collected from veg we ate will germinate.
I also tried calling the 0800 number for a couple of hours to get my vax pass, but no luck; maybe tomorrow.
Posted by Meg at 11/23/2021 06:54:00 PM