This is not a big sample and I didn't try too many techniques, so a short post. First, overall pictures. 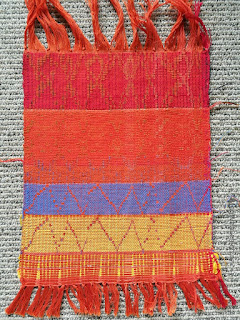 Top, the side I saw as I wove: 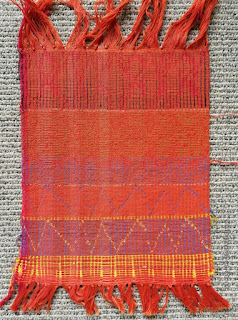 Reverse, the side I think should be the A-side in the finished piece:
If I may reiterate my main goals for this sample from my last post, they are:
* Recreating the look and texture of the "old wallpaper".
* Determining how much hue/value mixing is permissible before this began to distract from the "overall/all-over" look.
* Determining whether "disinformation" is best expressed in alarming, or in duller/cloudier colors.
While I wove, I worried about the massive reed marks, convinced that I needed to cram more, but look! 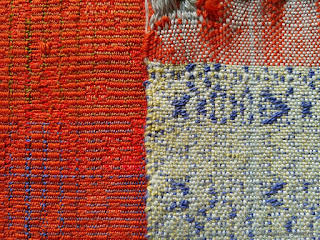 I sleyed at seven pairs of ends per dent in a 6-dent reed, and thought of it as more or less 42EPI, but in fact it's closer to 7*1 1/3*6=56EPI. No wonder it's not even close, the warp threads didn't have room to full. To get somewhere between 39EPI, (another sett I use with 20/2s,) and 42EPI, but to thread easily and quickly, I came up with five pairs; 5*1 1/3*6=40EPI. I started resleying this afternoon.
If you look at the two top pictures, paler values, be they in 20/2 or 60/2, are too stark, and in the first instance, detract from the strong statement about disinformation I want the piece to express. However, if I want to express "murky", they can be valuable. Other ways of experimenting are hue variations, (either to intensify the overall color, or really distract and introduce "disarray",)  or mixing/swapping colors frequently and not in stripes. But first I must see how they appear in the looser sett.

Using two pattern wefts hide the tabby weft more effectively and can intensify the overall color. Or by mixing different hue/value, I could create more discord. Again, I have to see how they appear in a looser sett. 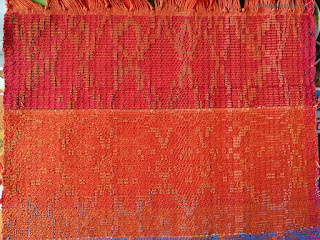 On the "Top" side, however the weft areas look flat and the warp areas pop up, which is interesting in a different way. (Orange part has two pattern wefts; the red part has one pattern weft.) The saturation is yummy, and I feel a little foolish not focusing on this side, but I'll stay on course. For now.

I have never woven anything where disrupting color harmony was an aim, but in the current project, disruption work to convey the main idea. I like the green tabby weft, it looked good with orange warp and red pattern wefts, but I had to try the opposite, so from the bottom, black, charcoal gray, and a dark gray purple. (I don't have a navy blue, but that would have been the complementary to orange.) The more I moved away from black, the more harmonious.
In summary, to create the look/texture of the original sample, my next step is to loosen the sett. Hue/value mixture depends on what kind of harmony/disruption I want to create. As to whether disinformation is best expressed by a clear and strong display of danger, or its hidden/unclear nature, is an editorial decision I have to make at some point.
Postscript:
1) I have been unable to learn clearly what a turned Summer & Winter looks like. A few books mention turning, but I can't get my head around it yet.
2) While reviewing various tied weaves, I was reminded I can have more than one pattern warps to every tabby warp. This is particularly useful in a piece where the integrity of the cloth is not as important as the appearance. Oh, boy, the possibilities!
3) In comparing this warp to the previous, Sunflower II warp, sometimes I find the reds and oranges alarming, but at other times I see nice clarity in comparison to the yellow warp. Colors, even to the same person, have different effects at different times.
4) I think I was expecting technical aspects to dictate aesthetic decisions. Because there are so many options in all directions, I am loosing focus. But... onward.
Posted by Meg at 11/22/2021 06:56:00 PM