How I Make a Shawl - Part 4: Dressing the Loom - Winding and Through the Reed

Next was the most dreaded, unnerving (for me) part of the entire weaving experience, the winding, the only step where I need Ben's help. 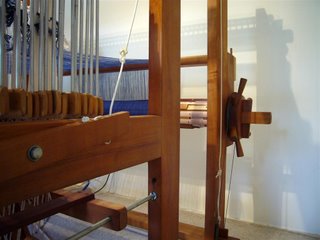 Theoretically, all I need to do is to wind handles attached to the back beam so the warp threads in the warp chain is straightened and wound on to the back beam, which can later be wound forward under tension to be woven. The reality is, warp yarns can get tangled with each other, the threads may be unevenly tensioned, or depending on the type of threads, it can get tangled up with the heddle, and even break, so the winding needs to be done under vary careful and as many watchful eyes as possible. This is the only part of weaving that I really dislike. 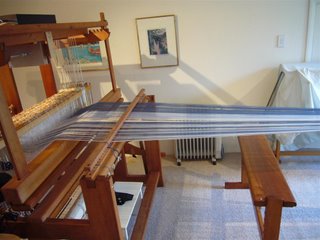 But I must wind to weave, so I attached a raddle on the front beam which allowed me to spread the warp relatively evenly to the width of the shawl; Ben held the warp chain, which was gradually undone by him and the threads held under even tension, at the other side of the room, as I slowly wound the warp. 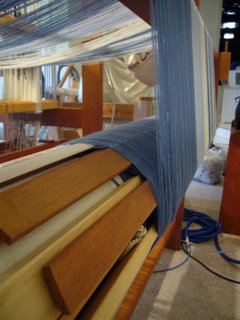 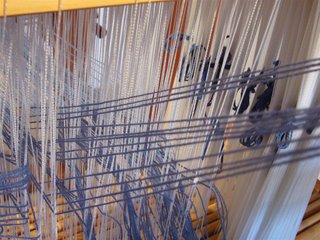 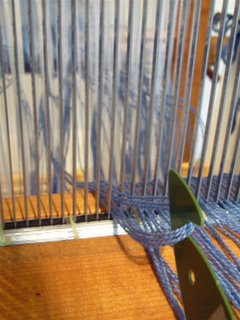 I wanted to weave this shawl at 18 ends (warp threads) per inch, so threaded three threads in every slot. When I weave, the bars in the reed helps me push the weft threads forward and into position. 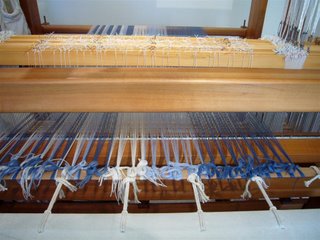 The winding took about an hour; the threading through the reed about another hour. Now I can tie the warp threads on to the front beam, and start weaving. Because I was not happy with the unevenness of the tension, I tied the warp threads directly, tugging at some sections more than the other, fine-tuning the tension. 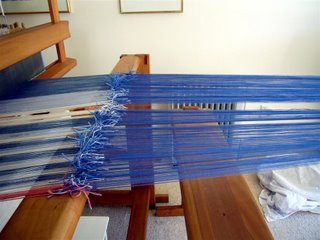 PS. A week later, I tied each new warp thread of the second warp onto the ends of the first warp, thus eliminating the need for threading through the heddles or the reed; the tying took me almost half a day, but this was still a great time-saver. I increased the number of warp threads slightly, so you can see the very long pink leaders, reaching all the way to the back beam, to make up the difference. The second warp is the more intense mid-blue only.
Posted by Meg at 12/07/2006 12:30:00 PM