This one is going to be a messy post, so I apologize in advance.

When Pat came a week ago Friday, one of my main concerns was the fabric didn't felt as much as I had expected. It's good that it didn't shrink so much, but not so good in that the fabric will probably droop in the middle, so we talked about putting transparent/translucent fishing lines. After another sampling, I decided to insert one every 100 picks weft-wise only.

I thought I was truly finished with sampling. I went over every line in the draft and corrected overlong floats, and made up the "final" draft. (It's never final for me, though; I have to sit on and sleep on it and fiddle several thousand more times.)

I was ready to start weaving Pillar Number One. I recalibrated the loom, (that's my FancyTalk for pulling here, tugging there, making sure all the parts that should be parallel/perpendicular are so.) I also replaced the red FS with three strands of white. Then I started winding bobbins, and lo, I almost had enough weft for one pillar.

I'm using three threads in the weft: two ends of the Merino/Mohair for the sheen and one end of origin-unknown-old-style-wool single for felting in the wet finish. I noticed a while back about half of the balls of o-u-o-s-w single were marginally skinner than the other half, but I thought there was plenty of each not to warrant much thought. I realized I barely had enough of the thicker o-u-o-s-w single to complete one pillar, and about 1.5-2 pillars worth of the skinner kind. Truth be told, I don't know if it makes much difference as I can't really tell when they are on the bobbins with the M/M, but when they are in a ball, I can. And since they go in the weft, I was worried the difference will show.

I dug up some more undyed old wool from my stash: I had one tiny ball of another single, (probably a knitting yarn?) but found several balls of two-plies in a similar weight. I sampled, and though this one is quite a bit whiter and fluffier, the result was similar enough. So, whereas I originally had in mind five as-identical-as-possible pillars, the revised plan now is as many pillars as I can manage. (I'm not worried if I end up with four, an even number, at which quite a few people has hissed.) So as not to make the difference in the weft combination stand out, I will modify the drafts, (probably slightly) from one pillar to the next. Oh, boy, talk about the cost of inexperience! I am getting fat on humble pies. 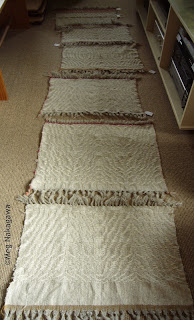 The second-from-the-bottom sample has vertical and horizontal fishing line supports; the bottom sample, using the whiter two-ply in the weft, has horizontal supports only. Though still visible, wet-finishing hides the fishing line slightly, but when the sample backlit, they shines like nobody's business. I plan to take this sample to the gallery next week to see if it bothers me enough to take them out of the pillars before wet-finishing.

I'm not sure if I'm going to keep the pillars achromatic or mix colors, but with the Silk Road theme, I can go either way; I can stick to the Roman/Greek feel, (I'm just describing them as such, even though they don't look Roman nor Greek,) or I can add colors to bring in Persian/Central Asian/Indian/Chinese/Korean feel.

I finally started weaving Pillar Number One yesterday afternoon, but this is what I call weaving by ear, or eye. The weft in this one is two ends of M/M and one end of the thicker o-u-o-s-w single; tomorrow I start weaving a different part of the draft and will start using two M/M with one thinner o-u-o-s-w single. 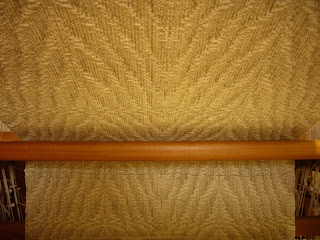 The undercarriage, as it were. As the scale of the design is bigger than anything I have woven thus far, I find it impossible to imagine how the finished piece is going to look. In this respect, I feel as if I'm weaving blind. Wondering if it would help, I started weaving from the bottom of the pillar. Pre-wet-fishing, the picks where the fishing line was inserted scream out.