While recalling some of my conversation with Finn two years ago, I remembered discussing Japan as the eastern end of the Silk Road. Earlier this year I was looking textiles places of interest near my parents' place where I might be able to visit the next time I'm home.

To my astonishment, I discovered there was a mini Silk Road in the region! Kanto Region's silk cloths were collected in the city of Hachiohji, a transport hub for several centuries, from where the cloths were transported to the port of Yokohama for export. This route, presumably traveled by people on foot and animal-drawn carts, was used extensively until 1889 when the current Chuh-oh Honsen rail line was opened, and declined rapidly after Yokohama rail line opened in 1904. The route's eastern 2/5 covers where I grew up, where my brother and sister live, my and my sister's first apartments after we got married, one of the places I worked, my mom's (and now my niece's) school and my brother's work, not to mention several of my shopping and socializing districts and my paternal grandfather's hometown. Mom told me in the 90's that sometime in the past Yokohama was the country's (world's???) biggest silk scarf producers, (and we were not exactly convinced,) but I had never known about this Silk Road.

I was wondering how to describe my post-earthquakes-photos- and Greek-financial-crisis-inspired "Pillars" in an exhibition named "Beginnings", but this last week I was able to connect two and two. Like I said to Finn before, I come from one end of the Silk Road; Rome, (OK, not Greece) is at the other end. I can live with this. Almost. Including the small problem of the work not including any silk.

These websites are in Japanese but there are a few current photographs if you are interested:
*This website was created to introduce the silk industry in Gumma Prefecture, but the top photo on this page shows a sign that may be on the side of the road.
*This is a tiny museum in Hachiohji depicting the history of the silk industry, not the road per se.
*I can actually walk from Hachiohji to the port of Yokohama following the old road: route guide from Hachiohji to Machida, (eight hours), from Machida to Yokohama (six hours).

Meanwhile, I've done some sampling. I'd forgotten how much the merino/mohair sheds; every time I handle a sample, I cough up a whole cat, almost.

The finished cloth does not felt as much as I had planned regardless of the variety of finishing I sampled and the sample draft-drafts created scalloped selvedges nobody's business. I may make up a temporary temple but I doubt I can control it that well. The biggest worry is it looks shabby and when I try to envision several huge pieces of these hanging from the rafters, the first several pictures that come to mind shout "A Giant's Bad Laundry Day".  The texture is more suitable to perhaps light-weight coats if you can tolerate mohair.

I was so worried/frustrated/in doubt  I asked Pat to come over to discuss options, one being ditching the whole pillars idea and use the warp to make something else. We discussed sourcing/sampling carpet yarns, using colors in the warp, and a few others. Pat's temple's minimum width was wider than my warp. In the end, it occurred to me, only then, that unless/until I weave at least one pillar, stand in front of it, and see it, I can't really tell if it's been a good idea after all, or crap.

There were also good things in the samples: I like the contrast in sheen in the warp and the weft; the scale and directionality of the design is good; and though I haven't decided if this is good or bad, the style is what I feel comfortable with, slightly flowery and "old" looking. All these components were as I planned.

I learned this week I was so not ready for big, showy projects. If I knew then more about what I was taking on, I would have considered material unsuitable for clothing but ones which would produce the look and constitution I am after. I feel very humbled. I was also reminded of how far into the design process we have to be when our chosen technique is loom weaving, how little leeway is left once the loom is threaded. Unless there is a lot of time and enough patience to make warp/rethread/sley. Fortunately or unfortunately, this time around, I have that time if I hurry. And really hate the first pillar.

This weekend's task: to map out on my life-size model the kind of design I want to weave including the focal point which I want  approximately 1.5-2 meters above the floor; then create a draft and sample sections of it. I may not get five pieces at this rate; I can live with four. Of pieces shorter than three meters. 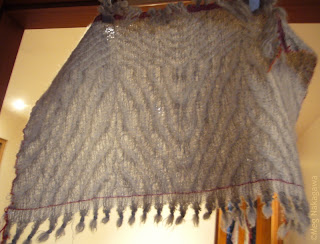