I finished my bag fabric, and want to use this sideways, but after a week I still can't decide which way up. There is also the wee problem of the draw-in being 1cm more at the end than the beginning, and I need a reasonably cool day to size this as the last thing I want is mildew before it morphs into a bag. I found a cute fabric to recycle as lining, and got the handles today; I wanted ones a bit longer so I can hang the bag on my shoulder, but these will do; proportionately these look better. 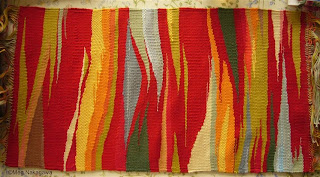 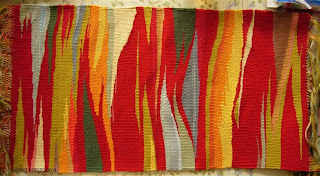 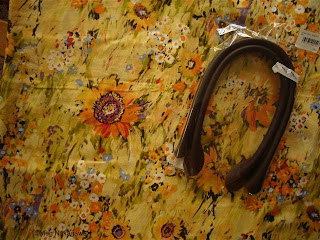 Mom wanted me to hurry and make the bag, but I've really gotten used to working and playing carefully. I still recall reading Connie Rose's this post when I was blown away with the idea of observing one's work and rethinking if needed.

I've been inundated by simple, graphic, Japanese motifs. These motifs are everywhere all year around, but are more visible in the summer with the resurgence of Japanese towels ("tenugui"), which are thin, plain-weave cottons the width of a kimono fabric, (approx 30cm) and, oh, somewhere around 45-60cm long, but also in gazillion permutations.

I wasn't thinking of them specifically when I worked on simple-to-weave-on-table-loom drafts, but I see the connection. I'm moving the motifs rather than placing them on a grid.

This is one I'm about to finish weaving; I see cute, colorful plastic buttons. 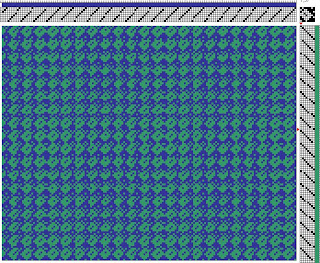 Mom and I happened upon a short doco on how the simple indigo polka dots, called "mame/pea shibori", towels are dyed in Arimatsu, and must have wanted something similar. 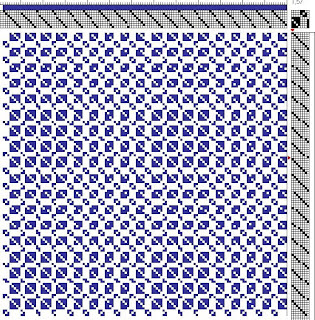 The drafts look similar, but "Buttons" has been woven with thick, loosely-plied 100% cashmere weft, whereas for "Tenugui" I'll use thiner, tightly-plied white cashmere/silk mix, so the outcome will be two not-exactly-too-similar pieces, fingers crossed.

Up next I have a white warp. Yes, white! (The warps I brought are for two scarves each, as I expected to have difficulty winding longer on the Ashford table looms.) To me this resembles square snowflakes, or the kind we made folding and cutting origami as kids. I'm using the same white cashmere/silk in the weft against fluffy white cashmere warp. 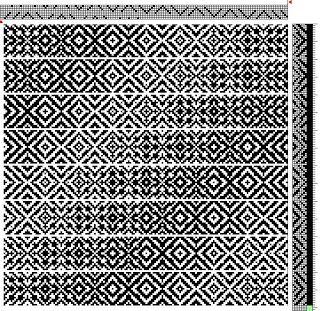