Another new word I learned in class: a practice, a plan, a dry run, of art work; this time I sensed its meaning, but I wondered if the word pointed to a particular style of preparation. In Japan, music is taught using Italian and German phrases/words, learn to sing a lot of Scottish songs and art and fashion is taught in French.

Last Saturday, I went to a concert in which my lovely sister-in-law played the violin. I don't like the sound of violin and I was reluctant to go in the morning, but listening to it live, sitting near the stage, changed my perception. I really loved some of the music, and I got to observe the expressions on the players. Lovely.

Mom and I also went to a tiny trade fair where we got to see some lovely Indian textiles from all regions and of all styles. Mom made friends with the young Indian fellow who is married to a Japanese and lives in Kyoto, and she was excited about his merchandises, (too expensive for us to buy, of course,) but I couldn't wait to get away because I didn't want my experience at the concert to be diluted. (The man talked a mile a second and tried so hard to sell.)

On Sunday, I went to the second session of Cubism painting. This is my teacher, Mr Kanamori's website. His classes are great fun, and he's such a personable man, but I had an easier time coming to terms with this multiple perspectives thing the first time around. I now have to do a painting in two or three sessions; I'm not worried I won't be able to complete it, but the perspectives puzzled me more this time.

I wanted to work on a self-portrait, but I didn't tell him that, so he suggested a still life; it being the day after my sister-in-law's concert, I wanted to work on the violin set, (and the wine was from Marlborough, down the road from Nelson,) 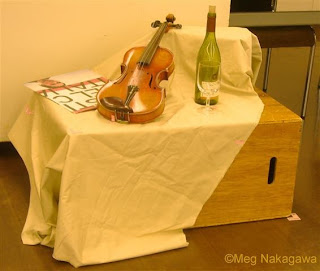 but I didn't tell him that, either, so he picked... this one. 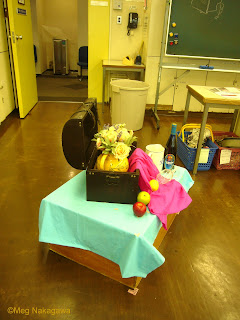 He said the interest would be the box and its contents. Yikes, too many things. I've been reading up about Cubism online, and looking mostly at Braque's and Juan Gris' paintings and collages, and I like them much more than I expected, but I haven't been able to connect the "looking" to "doing/working". So, more to do there.

I've been weaving the navy warp; I finished "Buttons" and will finish "Mame/Pea Shibori" today if Mom vacates a table like she said she will; it's 2PM and she's still writing out her shopping list in her PJs, so not likely. Maybe tomorrow.

On Tuesday I went to a local high school baseball game; it turned out one of the schools is one near my house, and the other, one of my nephew's. The previous day they tied up to the 15th inning so they had a rematch; it was a great game but my "local" school lost. I like baseball, but I think I adore Japanese high school-style cheering. I wanted to go to a small stadium so it didn't matter which schools played, and I wanted to sit on the grass; it started out as a terribly hot, sunny and humid day so I sat in under the roof instead; good thing, too, as twice we were interrupted by rain, the second time for nearly half an hour under torrential rain and thunder. Lovely. 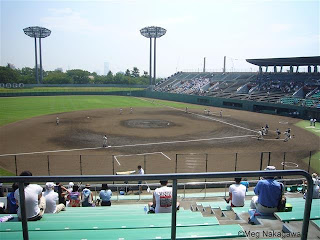 Then I went to Pushkin French Paintings exhibition; I couldn't be bothered by three-quarter of the 60-plus paintings, but, boy, did I love the section where painting became interesting and personal: Impressionism, Cubism, Fauvism, and a few others.

As I've said  before, I disliked Vincent, (and Rothko and Mondrian,) with a passion most of my life; now I can't stop reading about Vincent, and Rothko. Tuesday was the first time I stood in front of his painting and I was memorized; I stood, without thinking or analyzing, for a very long time, just looking. There were two lovely Gogan, some nice Cezanne and Renoir, a Lautrec, et al, but Vincent was the best. By a country mile. (Go down about half way here, and click on the thumbnails of some of the paintings.)

I was in the Pushkin exhibition until 15 minutes before closing, and ran through their permanent collections, by which I was pleasantly impressed, again, (among others, several Magritte,) and I intend to revisit. I am going to see another of Vincent's paintings in Tokyo, I hope, on Saturday.

Yesterday, Wednesday, I was going to go to the big baseball stadium to cheer for my real "local" high school but the day's games were canceled due to rain. They are playing in about an hour today, but I decided not to go because, as much as I hope these guys win, (we can see the school from my house; it's the whitest part of the snow pic in this post; we grew up listening to them practice since 1970,) the game is at the big stadium and I had so much fun on Tuesday in a small one I don't want to dilute my experience of that game. And I want to get some things done.

Among other things I started to sort my parents' digital photos, as that's one of two remaining tasks I must do before I go home. I spent about ten hours deleting duplicates and triplicates and ones where nearly 20 copies existed in Dad's computer. (Some automated process, but mostly manually, one by one.) Dad was nearly blind his last years so I see clearly how he intended to sort the photos but wasn't able, so I can forgive him to a certain degree, but nearly 20 copies of over 1000 pics of the grandkids? Well!!