And this Makes Perfect Sense to Me

Since I was home in Japan, I've been hoping to weave, weave, weave and make money, money, money to: 1) fill the hole made by three trips, (Ben*1, Me*2) to Japan so far in 2013; 2) to save up for another trip to see Mom late next year; and 3) maybe, just maybe, go to (the East Coast of) Australia and finally meet some of the weavers with whom I've been communicating for many years.

At the same time, Nelson summer has been snarling at my heels, scaring me into weeding and tidying at a relatively steady pace for me. But this place is in a worse shape than our usual bad shape, and a small patch whence I started which used to take one day to tidy has taken so far 8.5 hours and looks to be almost halfway done.

And I get far more tired than justified by the average 1.5 hours outside, and my left arm sometimes starts to shake after two. In fact, I've been not tired-tired, not sick, but just Blah-tired for almost two weeks and this week I was unable to make myself do very much. While weaving, collaging and even drawing ignite my creative mojo and I can't stop good, happy ideas overflowing, gardening overworks something else, and I can't stop this rapid slide show in my head for days afterwards. The slides aren't even of textiles; they are tutorial step-by-steps on how I should proceed in my garden!

I have been reading when I can. It takes me longer to understand what I'm reading, but it's another van Gogh biography and eventually this works. Other times, I've been watching-but-not watching much too much telly and DVDs, or playing simple computer games, just to stop the slide show. I bet there is a-chicken-or-an-egg component in my blah-tiredness.

Back to my money-making scheme. Very opportunely this week, Refinery Artspace decided to have a tenth anniversary sale, allowing us to submit up to four works to be sold at the reduced 10% commission. Just what I needed, right? Well, first it took me three days to read the instructions, print the requisite paperwork, reread the instructions, fill them, messing them up, sticking blank address labels and writing over them. And then I thought, folks at the Refinery, past and present, have been really good to me, so why not let them have the whole lot? Isn't this a nice way for the world to go around, giving what/when I can? Or am I feeling a bit too guilty about the cushiness of my life, compared to my family in Japan, compared to Vince? 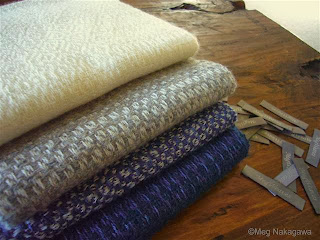 Anyhoo, today, I clipped the ends of the fingers, labeled, and put tags on the four cashmere piece I wove in Japan. It took me all b100dy day, but I got it done. They'll be delivered tomorrow.