Two days after I met Ruby and Ken, I went back to Nicola's and sat at the same table and ate the same Ceviche and basked in the glow of the memory. Ben and I had such a good time with JB and Ali on Saturday, even though we never rang them in the month Ben was home, we will probably get together a couple of more times this summer. And the former student I met for morning coffee, she told me it had been six years since they came to our house; her 3-year-old baby with much bijou had turned into a 9-year-old who could monopolize a conversation and go on a "find the picture" hunt by herself at the Suter, while grownups blah-blahed. Big Sister who starts middle school in Feb is a little more pensive, and prefers to address me in Japanese even when I speak to her in English. And I've been spending a lot of time at Volume; Stella and Thomas are a couple who enjoy working together and every time I see them I miss Ben, even though he's busy earning a living not one kilometer away as I ... er.... shoot the breeze and eat ice cream with Stella and Thomas. And Lloyd reminded me to not leave it so long before I visited him again.

I've been learning the difference between introvert vs shy; I was surprised some years ago when an Internet friend called me outright an introvert when, at least online, I thought I was a try-hard life of the party. According to what I've found online, I am (or have become?) an introvert, although by no means shy. Put me in front of a hundred people and ask me to talk about something I know and no problem, but before and after, give me a few days to get rid of the words out of my head.

And so we return to the tenuous relationship between anxiety/depression and withdrawal. Weaving is slow and I need all the time. Mixed media is fiddly and I need space. I have an extremely needy garden. I don't have a lot of money to spend eating out. I spend long hours in my PJ/work clothes. I read. I was the only kid for 7 years and I've learned to entertain myself early on and I like it. I'm fat and in summer I sweat and I'm embarrassed. And I am a homebody. And, you know, I don't drive so in Nelson I have to coordinate my act with Ben and/or walk 18 minutes to the hourly bus. But I think the worst part is I spend so much time questioning, "Why did I say that?" or "Why couldn't I have been kinder?" or "Why couldn't I have thought before I spoke?" or "Why did I talk so much?" So it's easier not to create these opportunities.

"They" say people, especially those with depression, should not isolate them/ourselves. I think interactions are meant to (re)position ourselves in our environment, locating our position on the map and (re)confirming where North is. I know some people don't need maps because they can organize the environment to suit them. I know some people who don't care where they are on the map or which direction they are facing. Some, like me, worry so much about the size, color and style of buildings, angles and width and right-of-way of/on roads, and even though north is clearly signposted, we cannot proceed because we worry about walking with the wrong footwear or with too big/small steps. So I'd rather sit in the middle of a white sheet of paper and concentrate on what's inside me rather than outside.

I know it's all about balance and I thought going into town as little as I can get away with was suited me very well, but now I'm not really sure. I do love good company, and adore learning. So the wondering/wandering continues. 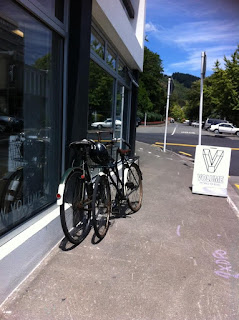 Stella and Thomas' bikes outside their Volume bookshop.