Ruby (and Ken and Mary)

Heyho, it's been a while. I'll hope to post about this summer so far soon, but I want to tell you what I did yesterday; I met Vermont, USA, weaver Ruby Leslie. And her husband Ken and his colleague Mary; Ken and Mary teach art at Johnson State College, soon to be renamed Northern Vermont University, and they've brought a group of students to New Zealand for an Art and Culture tour. Ken's a painter and a book artist; Mary teaches where art meets law; I would have loved to pick her brains on cultural appropriation. They had one day in Nelson so I tagged along as on a walking tour of Nelson's art-related places of interest.

When Ruby contacted me, I had to think carefully as a few galleries have closed and a couple have opened; many artists studios in town have either closed or moved out of the center of town; and most crucially, I haven't been into town often enough to keep up with the latest. But between my memory and recommendations from the Suter, we managed: the Suter, a new jewelry studio, farmer's market, Nelson icon Mike Ward's jewelry studio, Craig Potton Gallery, lunch at Nicola's Cantina (Mexican), Jens Hansen (Jens who made TLOTR rings has passed but the studio/shop is open), Flame Daisy (glass blowing), South Street Gallery (Nelson pottery), Parker Gallery (contemporary art, newest gallery in the old sheepskin shop), Red Gallery and Refinery Art Space. I wished I had a pedometer.

Mary asked for a New Zealand green stone carver to visit, but sadly nobody is carving in town, even though there are plenty working with gold, silver and other precious material. Even outside of town, Lloyd and Stella, (she now has her own bookshop) and I only think of three, one being Japanese. Though we have a few contemporary jewelry artists who make nice things, their work has a more universal look that doesn't necessarily appeal to visitors.

I went to the Refinery for the first time since they rang artists to pick up work from the shop; that was also the last time I saw Lloyd. The gallery, still called the Refinery, is now operated by Lloyd's Arts Council, under contract with the city council. It no longer has a shop, but is showing some edgy works as well as community art. I promised Lloyd I'll come help hang the textile art exhibition this year.

I noticed a strange behavior on my part that tells me I probably should hang around humans a little more; I kept using the wrong words. Most noticeable was I knew the ring maker's name, Jens Hansen, and yet I kept calling the shop, "Jensen". A few other words I misused consistently, like I do when I'm tired but I wasn't. It could be part of aging, but it felt more as if I'm out of practice talking to living human beings other than Ben, at long stretches. (Mistaking "cultural appropriation" with "cultural acquisition" happens all the time, though.)

It was the hottest day so far. I was naughty because I knew they were tired and I should excuse myself, but they were such wonderful people and the conversation delightful I dragged them around from one spot to the next in the sun and the heat. It was lovely to be with university people again, too; brought back memories of my Dad. Ruby and Ken are such wonderful parents, I almost wanted them to adopt me.

Tomorrow I'm having coffee with a former polytechnic student; Saturday we're having lunch with JB and Ali. Later this month my Philosophy professor from Minnesota is coming to visit. (I think we last saw each other at the end of the Fall term, 1981!) This summer is putting a real damper on my reputation as a recluse. 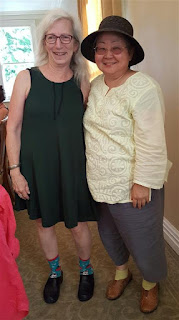 Ruby and Meg, after walking around in the heat all day. I took nice pictures of Ruby speaking with Mike Ward on my new phone-with-a-camera, (more on this in another post,) but was I meant to save the after shooting?? I can't find them. Bummer, it would have been a nice souvenir. I forgot to shoot her Frieda socks, too.

PS. If you ever meet Ruby, you must ask her how she got started weaving. It almost didn't happen!