I'm SO Sick of Thinking about Food. And News.

Not to be confused with being sick of food, but still, it's something I never thought I'd say publicly, but I so am.

The thought of this diet, doing it properly, agitates me. All I needed to do in the last seven days was to pick four to six recipes, make a shopping list, and for us try the 800-or-thereabouts-calories/day for the weekend, but I've felt this underlying fury/indignation/rage towards studying the recipes. It's been like the weeks (and months) before I do my tax returns; I know once I get down to it I'll need a day, two max, and will wonder what all the fuss was about, but for now I'm in the throes of fussing.

I feel like we're cooking all the time, (we do cook more preparing small side dishes to add texture and color to our meals,) washing dishes, (cooking utensils and lots of small containers for above,) and are spending far too much time in the kitchen, (we've often cooked together, but now also checking FB, etc., together. Ben likes it there.)

There's no doubt we're eating better; we are following the "what" part of the diet strictly: protein and lots of veg in every meal, virtually no carbs, and a lot fewer fruits. It's also lead rather naturally to decrease in portions, but still nowhere near 800 calories/day. The recipes state per serving calorie, so I only need to add two or three numbers per day. So short of someone cooking for us from the books, it cannot be made easier.

Ben does try to negotiate the details, because the books do allow for them; their default scheme is 800 calories/day for 8 weeks, but if we want to go slower, say, 1000 calories, stay on course for perhaps 10-12 weeks. Some of their own recipes even include small amounts of carbo! Their after/non-diet recommended calorie is roughly 1600 depending on one's size, lifestyle, etc. But here lies our conundrum. We went to a Japanese website, we did, and calculated the recommended daily calorie intake based on our respective heights; Ben needs a little over 1300 and I, 1100. So compromises don't do us much good, merely, it's just less naughtier than before. I periodically declare to Ben in exasperation he is on parole now, but I do project a whole lot of my own laziness on him.

Anyway, I can't wait to get on track and look back and tell how how silly I have been "back then". 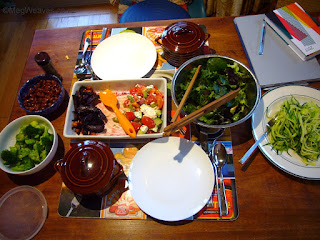 Supper a week ago Friday, one of my "I so don't want to cook" nights. Having healthy side dishes help.

There is no doubt a lot of my anger is in proportion to the news I consume. Early last week I watched vids of the inauguration/CIA speeches, the first press conference, and few online commentary, just trying to stay informed. Then I worked on mixed media and had Al Jazeera, the only 24-hour news channel on my telly, but I like their depth, completely absent from NZ news, in the background. By midweek, I was engrossed, unable to think of much else. Towards the end of the week, I tried to recall how I weaned myself off of news in 2001/02, when there were far less/fewer resources available to me; I can't remember except it happened suddenly one day, after my morbid fascination with W's parlance and penchant for cos-play turned into dread and the world crumbling seemed not as dire as getting away from him. And back then, we honestly believed it wouldn't happen here, unaware NZ's right was already shopping around for campaign/policy consultants in DC.

So American politics matter to me. I hear some folks in the US don't understand why did folks around the world march last weekend. As St Meryl said, bad/daring attitudes/statements from "leaders" normalize/spread. Head Dickheads of places like NZ and Japan deliver gift-wrapped unpopular changes in hopes of some tiny future favors, even a photo op, or at least lack of recrimination. Ideas and policies are just as easily exported as music and fashion, if they benefit those with the power to act on them.

With this many rapid changes, I don't think I can turn away just yet; my desire to stay awake is stronger than my own piece of mind for now. Though easing up is an option.

But life is not all bad; this post is getting too long so I'll post in another what else I've been doing. 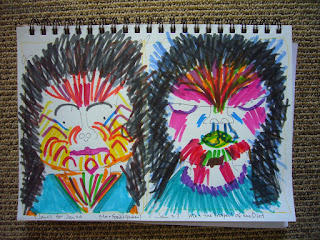