Life seems to be back on the old/default track, albeit much slower; I've been gardening a bit, weaving a bit, cooking a bit, and... wasting a lot of time dithering. The only thing that's different from before when it all went downhill is that somehow I'm keeping up with the drawing-every-day thing: I don't draw every day, but manage between 8 and 10 a week, so numberwise, I'm ahead, but then they have become super quick, (mostly blind,) line drawings. I think the goal this year is to stick with the plan, although I keep drawing the same faces by Matisse, Modigliani and van Gogh, so I'm learning a bit about a few.

This week's weaving has been the familiar twill, double width; the warp is Merino/Mohair, the weft is merino and I'm doubling it to make the width approximately the same as the warp, 20EPI/40DPI and slightly sticky. The weft repeat is short for me at 156 picks. I don't make very nice centers with double-width, but for the client, if she still wants these, this is sixth, and the seventh will be on the same warp, same threading, with mid-blue merino of the same size and a different draft. 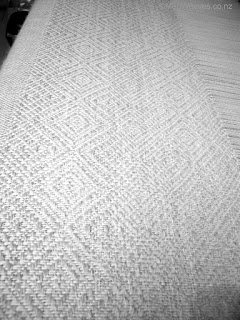 Seen from the side. 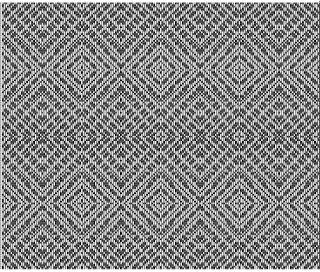 The weft is a pale gray marl, which is why I wanted the Merino/Mohair, to better show the design. I'm always taken aback when I need one or even three whole days to finetune the draft because the basics don't take that long; it's the fine-tuning and fixing the long floats without destroying the overall look, (even though they may be indistinguishable in the end,) that takes up time. Perhaps if I spent longer in the earlier stage my twills will be more varied.

The reason why I moved on to this piece, why I had the gumption to find/fix two threading mistakes I marked almost a year ago, was because I got lost/fed up with the tapestry-technique piece. 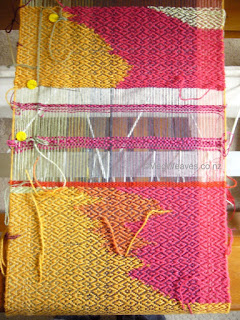 If you remember, I got started; the treadling was tricky but I color-coded it in small segments; and Pat clarified the technique so I was good to go, in my head. (It took a longer to get the body used to it.) But the way I switched colors was the usual zigzag, (what I call "kasumi", or "mist/cloud", a Japanese visual device used when depicting bird's-eye view,) and I wanted a less fussy pattern so I started over. But they don't look all that different, just slightly less fussy, so I'll keep going, mixing things up a bit. I think.

By the time I started the second time, I had half the treadling memorized so the weaving went somewhat faster, but I need breaks every two repeats lest I get tired and cross-eyed.