We've had a cold spell wreaking havoc up and down the country, except, again, Nelson has been chilly, the days starting at lower teens inside our house, in centigrade, and a few nights not quite getting to the cosy 18C in spite of a roaring fire, but you know I love it.

It's been an interesting winter, and in fact an interesting 18 months of changing climate. If I remember correctly, last summer wasn't as hot as the two before, with more rain, although not in regular doses but in all-or-nothing fashion. We didn't have spring/autumn gales, in fact compared to 2015 (??), nothing. We had a few hot summer days here and there, most notably the few days around the end of Daylight Savings, then winter chills came astonishing early, within weeks of the end of summer, and not gently but dropping down to Nelson's usual winter lows. Our deciduous trees dropped brown leaves all in one week. Then the warm (for me?) temps came daringly early around winter solstice and it's not sad enough our long evenings were going to get shorter, but usually we have cold until late July, so I was in despair! Then came this cold spell, so for me, yay.

I like cool summers, cold winters and rain in Nelson, and loathe the seasonal wind. But I discovered the down side of not having enough this year; our firewood is moist. We got a wood in early January which is later than usual but not late, and because we were both still going to regular acupuncture appointments for our various ailments we didn't stack them right away. But where we lave them is our second best wind tunnel where usually in spring/autumn the wind rises from the sea, rushes up the hill and blows and shakes my house. The best is around my kitchen and front door where we stack our wood below the eaves; that's against advise of our chimney guy who said the best spot is under the roof of the tiny patio outside the kitchen, but that's lightly off the tunnel and though it doesn't get rain, if left too long firewood grow green growth especially around the bottom layer touching the red brick.

When winter temps started, meaning theoretically there is no more gales, Ben stacked two-thirds or two truck loads, (and slightly higher than other years so I can't reach the top!) and we had a good amount of last year's, drier for starting fire, but I'll conclude this segment by saying they ain't as dry as other years and now I begrudgingly appreciate the seasonal gales.

For most of the last decade, since I started Unravelling, I felt I wasn't being productive, the Cartesian unthinker, unless I documented here what I did, which led to this weird compulsion to share for friendship of other weavers, but also because I was utterly clueless as to how to work for myself, to be a good administrator, beyond paying bills and taxes. Besides having always been talkative. Then this became a convenient chronicle, often the one place I check to see what I did on a particular month/year.

As I moved further inside my head, I've also become suspicious of loosing/diluting/deforming ephemeral ideas/images by turning them into texts. Sure, sometimes ideas become clearer and "actionable", ugh, by writing/explaining about them, but also often they became narrower, trivial, ordinary. I also felt shallow, or that I was cheapening my ideas, by the short idea-action-plan turnaround, as if I hadn't thought of all options, say.

But then I've always had horribly short memory which continues to shorten, so unless I somehow keep hints I lose ideas. Sketchbooks had the same, (worse?) constricting feeling, so I've been auditioning a bullet point list; when a point accumulates too many sub-points, sub-points come in paragraphs, or I have three or four levels of sub-points, it's may be time to hunker down and write a post, or scrap it altogether. Maintaining this list also provides logical and lovely paths to illustrate a point from different perspective, but then you know better, I don't always follow these lovely paths.

The point is, I have surprised myself last week to find I have been rather productive, or at least busy, in spite of not having chronicled anything here. And I don't know which way I prefer.

Other than that Ben works in a school, with some colleagues with small children, and every July/August he brings home icky sticky germs, this year in late June, I have been well. I have not had many debilitatingly-tired-for-no-reason days; although two to three months later than usual, I have been gardening in spurts, (it's so cold it's perfect for me); I have been reading books on paper; and I have even been weaving/weavering. I would say life is back to normal if I know what my normal is/was, but with it returned insomnia. LOL, the roughly 16 months when the mood was in low I had only a dozen sleepless night, but the last two weeks, three. As usual, I blame the over-stimulation in the garden.

This normal includes a few permanent changes, the biggest being our diet; aiming for as little carbohydrate as possible will last for the rest of our lives unless some new study overturns the benefits we've seen. We do indulge in an occasional pastry or emergency frozen dumplings, and we ate toast every morning in Melbourne, but it helps I get upset stomach from wheat telling us we've had too much and our baking with almond and chickpea flour have improved. In fact, we have become more sensitive to delicate tastes and smells, I spend a lot more time in the kitchen and although I don't record stuff I notice things, and I've become a better cook in a relatively short time compared to, oh, the last 43 years when I tried really hard, off and on, to be a good cook. That's not a bad thing.

And mixed media now has a place in my life. I want to spend more time in the garden and weaving so there'll be fewer days/hours spent on it, but I love the spontaneous, worry-free way of making something pleasing to my eyes, and it's such a easy way to experiment with colors.

Last week I excavated my purple/gray/claret hellebores from the tall weeds because they started a little while ago. The wood ash is fertilizer/bird-digging deterrent to a tiny degree, but most importantly markers for where the plants are after I've cut off all the old leaves, especially important for newer, tinier plants and the one dark purple, ugh, I didn't see and stepped on and hope I didn't kill. Sticks, rocks, and mussel shells are place makers, too. Not the pretty pics of two years ago, but, oh, I do so love them. 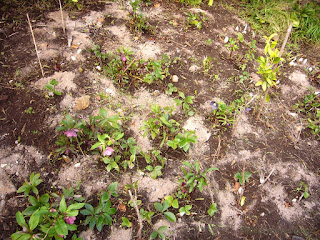 This is the most dense part and when warmer and the big leaves have grown the ground is covered. I hope to expand further to the left, and double the hellebore patch. 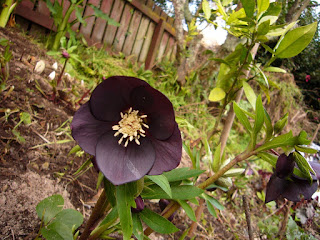 The second darkest, of which I have a couple. The darkest "grays" (very very dark, bluer purple,) stay smaller and don't self-seed, so they are the ones I pollinate most enthusiastically, although here are never too many seeds; at least not enough for me. 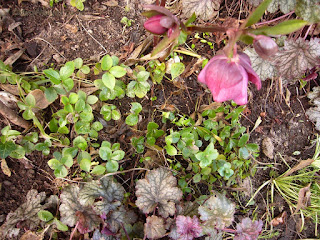 Whereas clarets self-seed freely; I'll spread these out probably next autumn/winter. 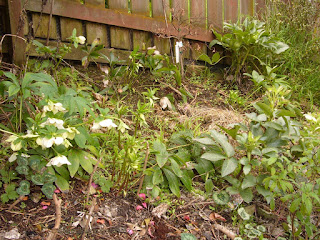 The white patch was weeded a few weeks ago and now it's time to weed the new weeds which were too tiny back then, and remove the leftover rubbish. Two freakishly vigorous pink lividus suddenly dropped dead last summer. I have two or three more of them left but eventually this area will be covered with Orientalis  singles of unknown or not purple/gray/claret colors. Although I have a lot of whites, I don't have a Niger; it was unintentional as the patch started with a couple of greens and one yellow, but that's gardening tough-love style. 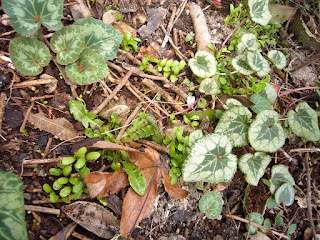 I found these babies in the white patch but sadly not their mama, which wasn't a small or weak plant. Oh, dear. 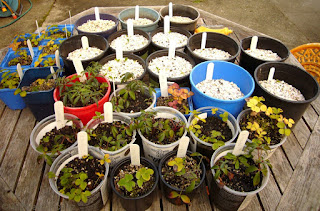 These were started from purchased seeds mostly from the northern hemisphere. (When I pollinate, I stick seeds near the parents directly in the ground.) In the foreground are Orientalis singles of unknown colors; hellebores are notoriously hard to predict even when (cross_ pollinated under strict control by professionals, so we see a lot of "various/unknown" seeds, but they germinate readily, too. All others are different varieties of purples/blues/grays, and possibly one or two named "black", purchased over the years. Seeds from the northern hemisphere take a minimum of 18 months to germinate at my house, but I've had two kinds come up after 30 months, so when I plant them, I dig biggish holes and entire content of a pot goes into the ground just in case there is a dominate late-bloomer hiding. I used to thinly spread grit over the seeds, too, but about 1 cm of crushed seashells have worked better so seeds purchased in the last two years are covered with that, which sure makes it easier to see new babies.

I don't know how much longer we can stay in this house, garden the slopes, (and the parts I'm working in are the easier parts,) but most worrying, carrying firewood across the driveway, up narrow steps, and across our patio, up a few more steps. Perhaps we should consider putting a one-switch heating system soon. But it is nice living and feeling the slight changes in our tiny corner of the planet. I'm hoping ten more years here, though.
Posted by Meg at 7/16/2017 12:32:00 PM