A week ago Sunday we had dinner with Deb Donnelly of Kapiti/Wellington.We had an excruciatingly delightful time, especially considering this was the first time we spoke.

Deb and I crossed paths three times that I was aware of: Randy's workshop in October 13 years ago, (she was the coordinator of the entire program of workshops,) Yoshiko Wada dye workshop October, 2010, (ditto in multiple locations in NZ,) and the opening of Beginnings in October, 2012. (I'm starting to see a pattern; should I book a trip to Wellington for next October now?)

In the last few years, I've been following her on Facebook, learning about her residencies, curation/coordination work, and relationships with artists/artisans in/from Asia and have been mightily impressed with both the scope and depth of them, all the while still teaching until just recently. She was in Nelson to attend the Costume and Textile Association of New Zealand symposium, the conference I used to go to, the one I found was not for me the first time. But I'm not dissing that altogether, and from what Deb told me, it was a good one this year.

The reason why I thought these conferences aren't for me was because most of the presentations were about labeling/categorizing textile items made by someone else, often historical, sometimes manufactured. (Academic, in other word.) Though I know many of the Masters/PhD candidates/curators who present also make things themselves, the papers didn't reflect that, (which is how it should be,) but dry and meaningless to me. There were also, to my taste, too many young first timers from one Australian institution every time, interspersed with "local" makers seconded to add a bit of color but who had no idea how to present.

So... yeah, a bit harsh, but the conference didn't help me become a better weavers. I felt my time was better spent gazing at images, reading about design, or sorting my stash. Mind you, I did go five times in the first 18 years of this century, because I love lectures, and I kept hoping for a bright new something, and it's not as if there weren't, but for the amount of time and money required, they were... disappointing. I don't feel apologetic, because I haven't had much disposable income in a couple of decades and what I do earn was/is spent seeing aging parent/s in Japan. And I didn't develop special friendships at the conference because... well, I must behave like a hermit. :-D

While explaining all this to Deb, (and golly, our paths had crossed several more times at these conferences without our knowledge,) I felt abrasive dissing the presenters' efforts. Granted, a few could have put in more, but I am a slow learner, a slow weaver, and my energy level having been so erratic most of my life, I want to spend most of my life thinking about weaving, design, colors and trying things out on the looms.

Which Deb got, instead of thinking I'm a brash, opinionated know-it-all because I sound exactly that. As I mentioned, she's taught for decades, so she is used to brash, opinionated know-it-alls, (half joking,) but I was ever so grateful to her for listening my rants (?)... accurately and giving me appropriate feedback. To have been gotten this way was refreshing because I didn't realize until then not everybody gets me in this way.

Besides, she's knowledgeable, hard-working and well-connected. I like the way she dresses, too; it reminded me about a decade ago the NZ Guilds were telling us all to wear things we made, to dress like the makers; Deb dresses like an artisan involved with Japanese/Asian textiles. Anyway, that was my lovely Sunday dinner with my new art-idol. Too bad I forgot quite a bit about what she said of Japanese textiles, especially regional indigo dye that hasn't died off, but these I can look up or ask, eh.

Baby elephants notwithstanding, I must finish the hellebores on the loom first. Saturday afternoon I had my second sitting since the tension problem emerged, but it got so bad I was spending more time adjusting than weaving, so I cut it off, unwound about 2 meters, (there are too many cotton cones on the floor I couldn't unwind any more,) rewound and resumed operation.

I may come to regret this, and have another whopper tension problem. I'm not sure if I can get two pieces from what's left of the warp, but one piece and fabric will be OK, as is two pieces of fabric with another cut/unwind/rewind in the middle. 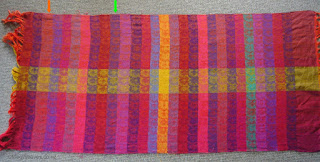 This is the washed/dried stage. The green arrow shows where I started to have the problem, the orange arrow shows a stripe I didn't beat hard enough and it is visibly wider/taller. But washed, dried and pressed, it doesn't show too much distortion caused by the drama. Phew.

I've been inconsistent in how I finish my cotton pieces over the years, (all machine-washed but hot or cold; in laundry net or not; "power" or short cycle; one or two rinse cycle/s; and sometimes pressed while wet, sometimes after dry,) so I must fine-tune this. Reed marks are my first concern, but with this 2/20 cotton, sometimes I get a wonderful sheen. (My source sources these from three different countries and told me ages ago characteristics may vary depending on the color=origin.) I need to study what process gives maximum sheen. At 42EPI, I also get a heavy, "semi-pseudo-silk" kind of a hand, but that seems to come after much handling more than anything else, but this is also worth looking into.

Re. this draft, people with more color skills could make this into a fun piece, but I'm starting to think I may be better off using same colors of contrasting sheen, for e.g., or "single" color warp /weft, "single" being one or multiple colors but uniform across the warp/weft. Even though I reduced the weft colors to eight purples/pinks/reds in the second piece, so far I'm not impressed.

Re. the elephant blanket, I have numbers so I can start making the warp. The four columns of elephants, (each in two yellow greens, two teals, mid+medium-light blues, and either red+pink or two navy blues,) are the main bit, plus a shorter red/pink chain for borders on two of them.

I said if I were to weave the elephants... umm, longitudinally?, weave one piece right side up and the other upside down, but it doesn't work when joining three pieces because the colors in one piece will be reversed:

So I shall add/move/remove the border portion of the warp as I necessary. There are only 42 plus two for floaters, so rethreading isn't a problem.

Ouch. Just heard this newest favorite merino, DEA's Saxon, ones I'm using for the elephants, is going up 24% in five days; they held off the price hike for two years but they can't any more. I've been carrying around the color samples everywhere for over a month wondering if I should order some now or later as they're not only good yarns but will help me in stash reduction projects as my default warp yarn. In a way they made that decision easier for me. Now where to store them...
Posted by Meg at 10/15/2019 08:20:00 PM