A Weaver Writes about Weaving

I made a gold warp on Wednesday. I expected to be excited or elated or something, but it felt just ordinary everyday normal. I'm going put this is the "good" column.

Earlier in the week I found a finished gold piece, roughly 6 inches wide, but I couldn't remember, and couldn't find my notes on, the sett. Since 2007ish when I started weaving with 2/20 mercerized cotton, I've woven variously in 36, 39 and 42EPI, 42EPI most often for the last many years, especially when wider.

But I've wanted to weave a wide gold series for a long while and I wanted to make another warp. I could just assume 42EPI and somewhere between 20" and 24" wide, sample and finalize the sett on the loom. Or I could find other pieces/samples to be more precise. I chose diligence and found another finished piece, discovered the first sample was probably woven 42EPI, this one 36EPI, and a bunch of smaller swatches. And things got complicated.

I want to revisit my earlier style that look like curtains or upholstery fabric. These drafts have a lot of plain weave area mixed with long floats. My later drafts, in contrast, have less plain weave. At 42EPI, the old drafts look distinctively warp-colored on one side and weft-colored on the other.

The hand/texture of the cloth in two different setts are completely different. 36EPI looks gauzy, feels loose/soft and summery, texture akin to cotton weaving from the subcontinent, but threads snag easily. 42EPI is structurally neat/tight/sound but a bit stiff for the neck/face, more suitable for cutting and sewing almost, but possibly suitable for wider pieces. The hellebores, for e.g. were woven in 42EPI. If you shake the 42EPI cloth, it maintains a horizontal line, if you can imagine. It's not like, say, a lace curtain blowing in the wind, but slightly more like a narrow roll-up style bamboo shade.

The key attraction of the gold series is a) the brilliance of the cold threads, and b) the metallic color it creates in the simultaneous contrast with the weft colors. With 36EPI, the sheen of individual gold threads is more pronounced, and the cloth looks like collection of warp and weft threads while 42EPI cloth is more cohesive.

This may be the limit of my explanation in words. So far I haven't been able to find samples woven in 39EPI, but in the end I just have to sample, and then decide if I want a loose or tight look and texture. I might just make a 39EPI * 22" warp so I can change the sett in either direction.

I'll add some pics I took on a day when the sun kept hiding and coming out every five minutes. 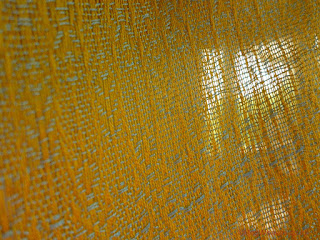 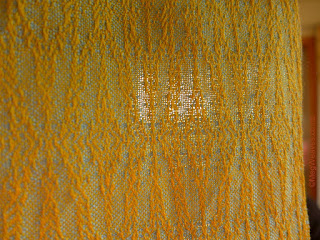 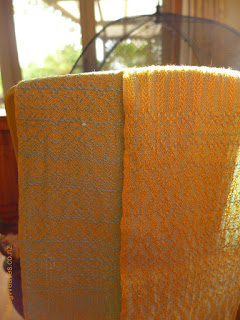 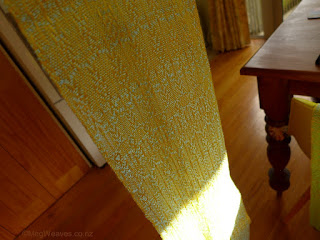 Attempting to show you the "metallic" look, 36EPI

I sold one of the hellebore pieces to my friend Nancy. It was a great boost to propel me to my normal life. NZ$ continues to crawl, too, so it's still a good time to fill the shelves of my online store, something I thought I might do during the lockdown.

Except... I've also felt I don't want add to other people's... stash. Not in individual cases, like Nancy having something I made, that I haven't got a problem with. Nor anyone I communicate with directly. But in a most general way, putting things online and marketing them, putting links to my website on social media, all that endeavour sometimes feel as if I'm brandishing drugs in front of an addict, except my drugs are pretty.

The question, "who really needs another scarf?" started to haunt me when disposable clothing became a frequent topic relating to the environment. At first I didn't realize folks threw those clothes away. There is a lot of poverty in NZ, and I don't have a lot of disposable income, so I thought inexpensive clothing was a problem only in how they compete against and undercut/destroy local manufacturing. But these days I'm reading about their disposal and in particular how much there is of clothes one can still wear, how "developping" countries suffer from being bombarded by these used clothes. I've come to think I want no part in this big picture.

I'd like to think many people learned we can live with far fewer things from the lockdown/isolation/quarantine, to live a slower life, to make things ourselves, and to buy and accumulate less. I've always felt very strongly about this, to the point sometimes my mother was in tears looking at the clothes I though was OK to wear in public. I might tell you more about our family's story relating to this in the future.

Businesses have suffered here as a result of the lockdown, like everywhere else, or even more so because New Zealand is such a small economy. There have been tremendous push to buy local, which in and of itself I endorse, but there is a fine line sourcing what we need locally vs. encouraging further consumption, "because we all saved so much money during the lockdown". You see where I'm going with this? Many folks lost jobs or their hours have been reduced. And yet there is real, tremendous pressure to consume now in New Zealand. And I have a hard time reconciling being a handweaver of nice scarves and being part of the worldwide effort to reduce. There is such a move, isn't there?