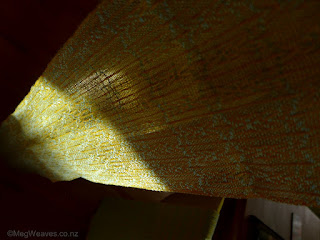 Day 33+16+8, May 21. (Text on Day 33+16+9.) Miserably cloudy/sunny/miserably cloudy/sunny and miserably cold. First time this winter I lit the fire in the morning. I was keen to make a wider gold warp, something I planned for many years, and dug up another piece I kept for reference, then all the sample swatches, intending to ponder and blog about it. But it was still cold, and I wonder if we have a mild cold; mild fever, mild headache, mild sore throat for a second day, (all of which would go away with one normal-dose paracetamol,) plus grownup-dose lethargy. I ended up gazing at the screen the whole day. At one point I thought of picking up a printed book, even had few great ideas, but didn't. Would anyone care to psychoanalyze? 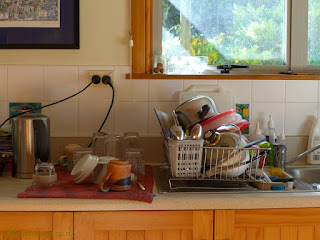 Day 33+16+9, May 22. I did not wake up once overnight, which is a first in so long I don't remember how long. When I got up, I discovered Ben had washed the dishes as well as made me coffee. Yay.

We are two older folks who eat one or two meals a day these days, don't snack much especially now we don't have junk food in the house, but consume copious cups of tea/coffee/water. So what you see here is two days' worth of dishes. If we don't cook, there is very little to wash.

Which made me wonder why on earth I spend all morning most days washing dishes and cleaning the kitchen. Unless there are dire tasks, I loiter to kill time until the 1PM update. I refresh Facebook many, many times, as well as various Plague numbers and graphs; I often watch a Shakespeare play, or two, or an opera in that time. But I am definitely washing a lot. I also cook or prep dinner some days, but not every day, and I cannot think of what else I could be doing in the kitchen more than half a day each day.

That's it for today. I still don't know. 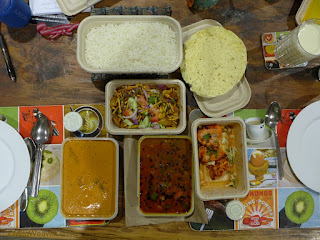 Day 33+16+10, May 23. We need/ed to go to the supermarket this weekend, but we were too tired today. One of us needed to cook, but we weren't motivated because whatever we made would have been similar to something else we made recently. So we decided to have one of our favs delivered, but remembering GPS points to our legal boundary and not the house nor the driveway entrance, I suggested we either walk or drive up to our post box, but Ben decided it's just as quick picking up the food ourselves.

It's a balmy lovely evening, folks are having parties at home, and the town is plenty busy. Our restaurant had a few groups and two waiting for takeaways, another man arriving as we left.

And there was not a mask nor glove in sight, but a lone sanitizer bottle outside the door. But you know, if this is the way Nelson rolls, there's really no use us getting uptight or sensitive. At least that's what we're telling ourselves. Except folks are now travelling domestically. I can't help worrying Corona coming in from other regions.

The food was yummy. But also... we our cooking improved quite a bit, especially in the curry department. That was illuminating. 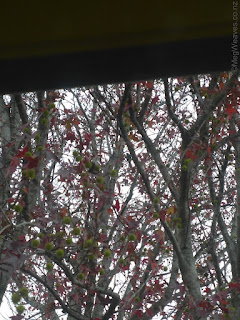 Day 33+16+11, May 24. I was carrying some wood into the house when I kept hearing tuis calling from high above. Our maple is the highest tree at ours so I went inside to see if I can spot them from the other side of the house. Sure enough, there were two. One moving around within a small radius, while the other jumping around. You might be able to see the blob slightly to the left of the center; that's the still one, while a sharper shape higher (smaller) slightly on his/her right is the restless one. We enjoyed eavesdropping on their conversation for almost half an hour.

We, too, were jumpy because we had to go to the supermarket. New World had about a dozen in queue in the rain, again, so we went to Countdown where we were second in line. Once again, not a mask or glove in sight. We had on everything, but my glasses wouldn't stop fogging up so I took my mask off, them Ben did the same, but we kept our gloves on. Everybody, shoppers and staff, were ever so casual about distancing; I might have seen two other shoppers being mindful of the space around them. I was shocked to see the two meter marker near the till, and long that was. We are living as if Corona is finished in Nelson.

I've read articles to the contrary, but we did the standard denuding of groceries after we came home. The routine may be easier if we shopped more often, but so far we're erring on the side of quite a lot at once. We may need to add some veg and possibly milk, but this lot should serve us for at least a fortnight, if not longer.

Cabinet discusses the next move tomorrow. 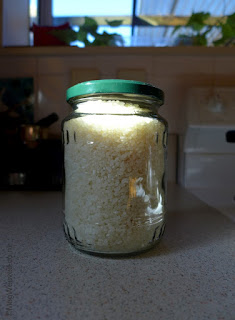 I'm no longer paying much attention to the announcements because these details don't influence our lives. The only thing I took away is Ben will/might work from home until June 22, although not necessarily. I miss the clear-cut rules of Level 4.

I don't see Nelson observing physical distancing as prescribed. For e.g. the number of shoppers who can enter a supermarket is still controlled, there is hand sanitizers that nobody seem to be using, but once inside, at the one we shopped on Sunday, anything goes, shoppers and staff alike. I feel we are back where we were pre-Level 4 lockdown; we are on our own to fend for ourselves.

We have been eating a whole lot more carbohydrate. I blame colder temperatures and less frequent shopping, but carbos are so easy to plan meals with, to cook with, and so comforting. This is the first place we need to start practicing our post-Plague life, and by we, I mean I. I'm trying to disengage from Plague news, (except where rules we must follow change,) because we are now in election mode and it's starting to get ugly. 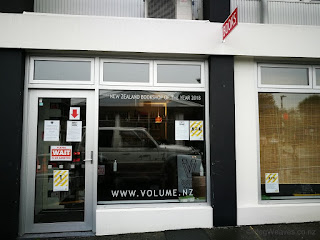 Day 33+16+14, May 27. We were going to go into town, so I was going to do something funny outside Volume for a laugh, but Volume has irregular hours for now and we couldn't get our act together to be there before their..... 1PM closing. So this is a pic from late Sunday; I wanted to see the rearranged store interior but the car's reflection got in the way. 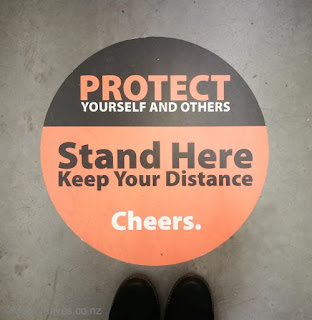 (Text on Day 33+16+15) Today was the third day in the last five we went into town. Ben checked the PO box, I posted a cotton scarf in the pre-paid mail drop box, we filled the car with petrol, and got the downstairs loo hose appropriated for the upstairs loo at the start of the lockdown. Again, I was the only person wearing a mask in any of these locations, and I only saw one other person besides Ben, a petrol station attendant, wearing gloves.

There are still rules regarding distancing, (2m from folks you don't know, 1m from those you do, presumably outside of your bubble, presumably to make contact tracing easier,) but most humans I saw, including at one school, stood, spoke, and touched each other as in the pre-Plague days. Stores open during the Level 4 lockdown, and some of their staff, appeared more aware of physical distancing, but humans in Nelson I saw were finished with "all that". Two or three older women in the hardware store hissed and glowered at seeing me in a unique, handwoven, homemade mask. Oh, the perils of Masking while Asian.

They say even if one knows something is untrue, if one hears it too many times, one begins to believe it. I know the numbers in New Zealand are good; I know the rules stipulated by the government, my bit I as a consumer and not a business operator, must follow. My nemesis, the Top Doc is "on the fence" about the mask, that is he doesn't come out and say you don't need them, but his entire being dismisses the issue whenever questioned. I also read about the second wave. And that NZ government now thinks unless it comes in from the outside, we're good to go. I am tired of feeling as if I must defend my take on masks. And politicians, academics, and the media will be opining/screaming especially loudly for the next four months.

I find the situation excruciatingly distressing. I'll just stay here until... whenever. 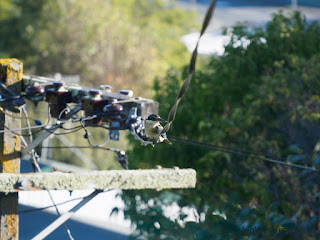 My favorite visitor. Or one of three favs, with Ben's zoom lens. Today's visit was short-ish, though; stay longer next time, and make it soon.

Re. the gold wider cotton warp, I decided not to make it now, but finish what's on the loom now, weave and  sample different setts with the narrower warp, then make a proper one based on the samples.

I've run out of lockdown adrenaline. I've been exhausted throughout this unclear Level 2 more than ever. The good part is, I've been thinking about weaving more or less consistently, a sign I'm thinking "normally"; the bad part is, my attention is otherwise preoccupied and my thinking doesn't translate into action.

I have a laughable problem: when to stop my FB Plague diary. The Internet recommended keeping a diary left, right and center, but never specified when/how to stop. Since I started the night before Level 4, I could have stopped at the end of Level 4. Or after the short-lived Level 3. Or since I started keeping a record of what we did when Ben started working at home, which turned into the start of Level 2, I can finish when we finish Level 2. Which is no further away than June 22, although that sounds so far away.