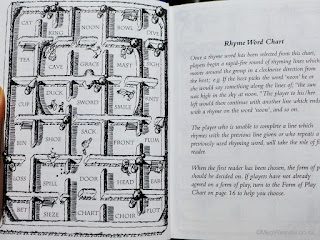 Day 33+16+1, May 14. Level 2, Day 1. What a grumpy day. The airport was noisy last night and I couldn't sleep. It and the road was noisy again in the early morning and it woke me up. The worst was the gray smoke coming out the chimney at the tip (?) crawling sideways, leaving an ugly gray stripe in the sky. And the endless beep-beep of vehicles reversing or forklifts assaulting the air; that could even be a Japanese "innovation."

The weather is nice but I'm too tired goo back to work on the slope. There is something wrong with my left foot. I have unfinished projects around the house. I'm making snail's pace progress, but this is priority because we're walking around the stuff on the floor.

Bitch, bitch, bitch... I miss the slower, more quiet, introspective life of the lockdown. Tonight, the air was already murky at sunset.

But Ben picked up my Versability manual at the PO. Most pages are filled with old English poems, but I love the illustrations. Also found another Shakespeare podcast. So I'm feeling appeased at the end of the day. 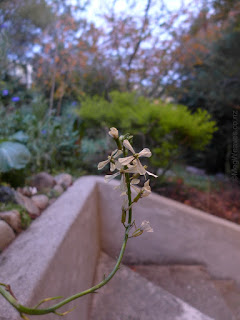 Day 33+16+2, May 15. Rocket flower at dusk. In the morning there was a haze at middle height (??) of the sky. I don't know if there were other reasons (as well) but I never thought of Nelson having industrial air pollution until this week. (It did/does due to wood burning heaters.) By world standard it might have been nothing, but it was shocking. I felt emotionally choked.

I got sick of complaining about the world, so I went outside. Neighbour had professional tree cutters, and their machines were raucous. But I pulled out sturdy weeds and cut robust branches for half a day. I'm rightly exhausted. I am so old. 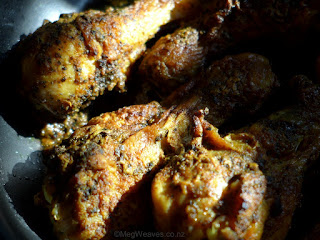 Day 33+16+3, May 16. (Text and pic on Day 33+16+4.) Although we've been allowed takeaways for two and a half weeks and conditional dining in for a couple of days, we've stuck to our own cooking. There have been plenty of time to cook, and if I may say so myself, my cooking has improved a little, in the curry-like-Ben's department in particular. On the other hand, however, I have a very small repertoire, and I've been itching to taste someone else's flavours, (including our favorite Indian takeaway.) So instead of making it chicken curry, I made a veg curry, and Ben char-grilled chicken legs. And both were very tasty.

I woke up with every muscle in my body aching this morning, mildly surprising because I didn't weed the slope yesterday. I had hoped to keep working and finish that particular patch today, but let's just say the curry took up most of my day, so I "couldn't". Yeah, that's the story I'll tell.

Another wintery evening, with the fire roaring. We are now out of ginger wine. 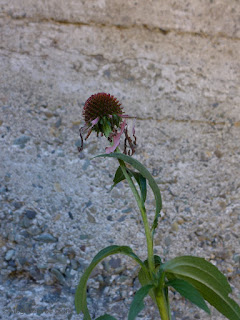 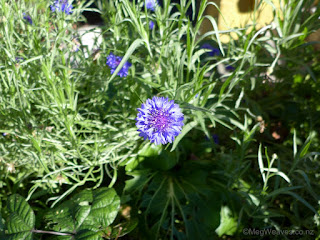 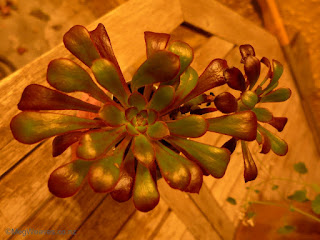 Day 33+16+4, May 17. After yet another slow start to the day, cleaning the kitchen and watching The Globe's The Two Noble Kinsmen for the third time, (I can't get enough of it,) I Checked the other echinacea flower for seeds. Few more weeks, she said.

I also thanked my many lovely tall cornflowers for lasting as long as they have and still going strong. I tried to psych myself up to continue labouring on the slope, but I needed Ben to do the hard lifting for today's portion. He concurred.

We got everything we intended to finished, but of course there is always more one can do, and we did. A portion will have to be redone at a later date, but another day, or day and a half and we will finish the northern section of the north western quadrant. And that day, or day and a half's work, I can do it by myself.

We had a wee tour of Kathryn's rockery, so I took this pic to see if she'd like some. Or perhaps two other succulents she can break off and propagate. I know nothing about succulents except they tend not to die and tend to take care of themselves. All I do is collect fallen bits and stick them in new soil. I don't know why I don't have these all over the place. 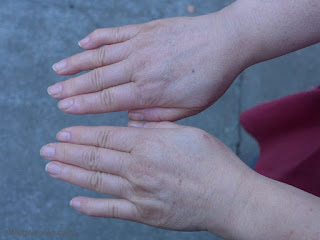 Day 33+16+5, May 18. (Text and pic on Day 33+16+6.) Indecision has been a problem for the last couple of decades. The worst is ordering food in restaurants, (as a consequence someone else's meal looks so much tastier,) but it also gets in the way of, oh, deciding what to do after a day's housework is finished and I have a better part of the rest of the day wide open. Yesterday it was between making a gold warp or weeding the slope some more. At the back of my mind was an increased stiffness in my joints.

My left fifth finger has always been a bit crooked, as, most weirdly, the nail got shorter and shorter over the years. (Most probably unrelated, though.) Not so on my right hand, and it's only recently I noticed it's bent much worse than the left. And that's they one that needed Voltaren a few days ago.

There is no arthritis in the family I know of. Dad's gout on his left foot is the closest I can think of, although Mom's hands were getting stiff by the time of her exhibition in 2016.

Ergo my dilemma. If I'm going down the arthritis path, I'd rather weave than weed in the time I've got left. But being so close to finishing the northern part of the Northwest quadrant. In the end, OCD prevailed, helped by Dad's use-it-or-loose-it creed.

There's probably a couple of days' work left there. A 12-inch-wide warp, on the other hand would take, oh, half to three-quarters of a day? 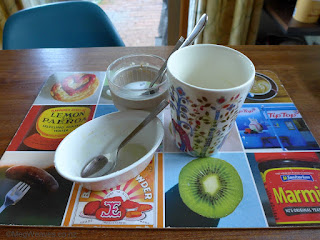 Got up, had coffee and breakfast. Fed sparrows. Took a few breaks washing dishes. Not many. Mind wide open with nothing in it.

Don't know what I did until 1PM, but was standing in front of the sink when the update came on. Not cooking because we had enough leftovers.

Sighed and had a nap. 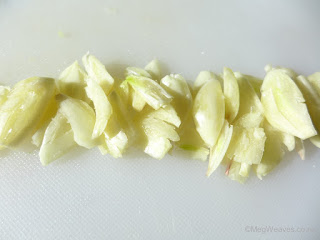 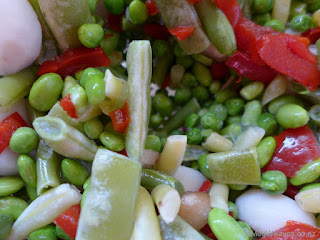 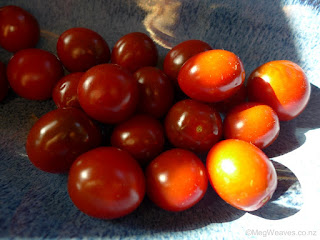 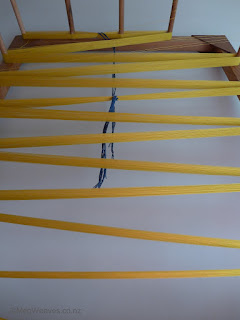 Day 33+16+7, May 20. Today marked the halfway point of scheduled Level 2. If all goes to plan, in a week we will go down to Level 1, though we don't know what that means. Life all around me has more or less gone back to normal, except supermarket shopping still must be conducted under the old scheme and Ben's still home.

In spite of myself, part of me is rapidly readjusting to the old normal: I have all the old anxieties, old complaints, and the old insomnia. (During Level 4, I woke up many times at night, but could easily go back to sleep.) One of the old normal is constantly thinking something relating to weaving, consciously or not.

Today I decided first thing in the morning I was going to make the gold warp with 2/20 mercerized cotton; I like the sett of the sample I kept, but I could not find what sett I used. Way back in 2006 when I started using this size, I started with 36EPI, sometimes 39; lately with much longer skips I've been weaving at 42EPI. The drafts I am considering have long skips amidst plain weave, so I'll start with 36, but if it's too loose, I can resley. Weaving with these gold warps has always been delightful. I'm looking forward to going back to it.
Posted by Meg at 5/20/2020 09:22:00 PM